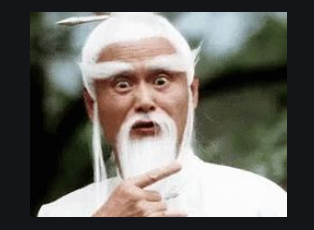 This is not just me of course; the mentor and protagonist relationship is powerful. Some of the best moments in many stories are the first encounter with the mentor, the training and sense of discovery for the protagonist, and the eventual loss of the mentor character (they often die, or at least are not able to help when the protagonist faces their final challenges in a story).

When the mentor dies it's often the most memorable moment in a story.

Maybe we dig them because they know a lot of stuff, and have strengths that are germane to the type of story being told.

In certain genres, they're really badass. Or they're wise. In other genres, they're cooler than the protagonist, who still has a lot to learn. Sometimes they're even comic relief characters, if the Protagonist is now an expert, while the Mentor has passed his prime.

My top seven fictional mentors (or the seven that come to mind at this second):

-Aahz, the mentor to Skeeve in the Myth Adventures books by Robert Asprin. Aahz is hilarious, a bit nasty, and one of my favorite characters ever. Just as a mentor should be, he's absent at crucial moments in most of the early books.

-Wade Garrett (Sam Elliott) the ass kicking bouncer and mentor in the movie Roadhouse. So cool! This is probably my first exposure to this type of “rough mentor” character where I began to recognize the mentor's function in a story.

-Sean Maguire (Robin Williams) in Good Will Hunting. The mentor relationship is important in that movie. There is also another mentor for Will: Sean's former friend Jerry (Stellan Skaarsgard). Having two mentors can be an excellent way to give a protagonist an inner conflict and decisions to make. The mentors represent different paths the protagonist can choose.

-Fletcher (JK Simmons) from the movie Whiplash. This is the story of a very challenging relationship with a mentor.

- Another tough guy mentor, and an absolute favorite was John Winchester, father of the kids in “Supernatural”. John was in the series mostly just in season one, then disappeared for many years. But he still looms large over the series. He went off to the Walking Dead, bustin' heads with his barbed wire bat.

- Special shout out to Pai Mei in Kill Bill. He gave his students a rough time!

Of course, I also dig the traditional wise mentors like Gandalf, Obi Wan Kenobi, and Furious Styles (Boyz in the Hood). Doc Brown from Back to the Future is another one. There are so many!

Some mentors can be “false mentors”. They betray the protagonist or let them down. The HBO show “Barry” has some fun with the two pseudo-mentors of the lead character: Fuchs, his partner in the professional killer game, and Gene, his acting coach. These guys are both flawed mentors, but I think they both care about Barry… in their own ways. Maybe.

IMHO "mentor" is a role, not really a type of character. Since many stories involve a growth of the hero, it implies that the hero has to go from A (well intentioned sucker) to B (super cool guy). Having a mentor in the story is a way to show to the readers what B should look like, and also to rationalize how the hero manages to go from A to B.

Being a gamer, one of the absolute top-notch mentor characters I can think of is The Boss from Metal Gear Solid 3 Snake Eater. Not long after she is presented as the main protagonist's former mentor, she immediately turn enemy on her former student, as she defects, and they find themselves on opposite sides of the cold war. Throughout the whole game she is totally unbeatable, kicking the main character's ass over and over until you finally face her in the final boss fight, putting everything you've learned so far to the ultimate test of surpassing your former mentor and beating the game. I won't spoil more then that, but the whole storyline of the game culminates into a conscience raising and heartfelt lesson from the mentor character to the main character about patriotism and what it actually means to be a soldier giving everything you have for your country and the mission at hand.