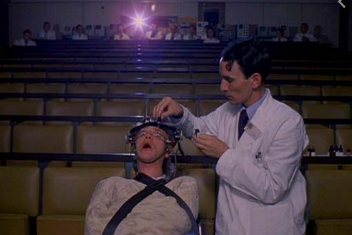 And so we have arrived to the juicy stuff- Evil Psychologists!

You'd be surprised, but there have been a LOT of those in real life. It's the reason that the ethics code and penalization if that code is broken is so severe for professionals in the mental health sector. An evil psychologist is basically an unethical one: one that uses the skills he/she has acquired without regard or, even worse, with direct malice for his/her client's emotional, mental and physical welfare.

Therefore I think the best way to talk about evil shrinks is to illustrate with three real life examples which are notorious enough, either in pop culture or in the psychology circles (both, really), and the archetypes for your realistically evil therapist types.

The first is the infamous Milgram experiments on obedience.

Though an important set of experiments in their insights into human nature, the disregard for the wellbeing of the participants in this experiment is unconscionable, even with the supposed feedback of many participants that they were glad to have participated.

The reason for this is that the nature of the experiment (to find out to which extent, even to the point of killing a person, would the participant continue to obey authority's orders) is such that forces the participants to come to terms with a part of themselves they may not be ready for or, even worse, not know how to handle. Suddenly realising that you might be capable of murder if the man in the right uniform or labcoat orders you is a shocking thing, and a high stress risk. This can lead to a lot of emotional and mental disruptions in a person, either immediately or further down the road.

And that's not even counting in the whole Holocaust perpetrator apologist element in the experiments.

Milgram is probably the inspiration for a lot of ubervillain mind controlling evil shrink underlings.

The second example of evil psychologists from real life are those (yes, plural) who are involved in the notorious Conversion Therapy treatments.

Not only the effort to change a person's sexuality is futile as it's simply not doable with what we currently know about the human mind and body, assuming we would want to do that, it is also extremely traumatic and abusively invasive. It ranges from behavioral modification treatments to lobotomies, and aside from extreme mental and physical trauma, potential PTSD and other disorders afflicted to the victim of conversion therapy, there is no permanent or even short-lived sexual orientation change.

Dr. Brodsky and Dr. Brandon from A Clockwork Orange might have been inspired from the approach to ‘curing’ clients that conversion therapy has.

Last but not least are behaviorists Watson and Rayner, and their victim Little Albert. This was one of the earliest behavioral conditioning (or behavioral modification) experiments, in which the two experimenters literally aimed and succeeded in giving a little boy a phobia. And they succeeded so well that the phobia generalized and the boy started being terrified of a lot more things than the initial goal of being afraid of a furry animal. There are some accounts that he ended up fearing even the color white in some contexts. The worst of the matter is that Little Albert left before they could perform desensitization and help him get rid of the phobia he had never initially had.

Even worse is that either the little child was the subject of the experiment without his mother being aware until it was too late, or his mother was being coerced into allowing them to do this to her baby.

Evil psychologists like the ones conducting the super secret ubermensch experiments on children in Naoki Urasawa's Monster, are very much in this category.

Evil psychologists are insidious, manipulative and unconcerned about what harm their practices might cause, if those practices serve their purpose. Which are things many villains share, but in the case of therapists they have the added bonus of being able to get under their victims' skin.

Fads and Fallacies in the name of Science by Martin Gardner is a great start. There are other works especially about alien abduction and various uses of hypnosis that may not be evil but are very misleading like "false memory syndrome " . The evil affects of the various false memory child abuse cases are also well documented.

Well there were plenty of therapies that were based on false cultural assumptions and "research" but whether they are evil in the context of their culture or evil to us in our more enlightened times is debatable. There's always Kellogg's wonderful therapies for mental health before there were professional standards.

In addition to "evil therapists" who are frowned upon by their own contemporaries, mental health sciences do have a history of going down very wrong paths of therapies and treatments that were mainstream and accepted at the time. I guess it calls into question the nature of "evil." Torturing people who you truly believe you are helping even if every member of your profession agrees it is the right thing is still wrong. (And how frustrating to have institutionalized evil, rather than a "bad guy" you can vanquish.)

Marcorossi: It's all a matter of context and definition. The army (and the military draft) are customarily not in the habit of telling you to kill people they don't at least label as a threat or enemy to your own country. Not an innocent person that just doesn't seem to have a good memory. As for the nazis, and whether every person "in some conditions" might act like the nazis- that is a huge and as of yet unsolved debate, with in vivo case studies that tend to negate the premise of non-culpability of the perpetrator. The fact remains that not all Germans acted like the nazis even during the 30s and 40s. The fact also remains that the setup of the Milgram experiment had a series of very significant differences in how the participants were ordered to end up killing the person (I refer you to the wiki and the criticisms on the particular issue) than how nazis were told to do it in the Holocaust. Beyond this, I'm not sure what you're asking with the "how??" you mentioned.

"Suddenly realising that you might be capable of murder if the man in the right uniform or labcoat orders you" It's called military draft. "And that's not even counting in the whole Holocaust perpetrator apologist element in the experiments." How??? Serious question. Unless you think that Germans in the first half of the 20th century were for some reason expecially evil (but then you have to explain why this happened), one has to agree that every person, IN SOME CONDITIONS, might act like the nazis, the whole question being what are the conditions.

Unfortunately among the therapist/psychology profession there are a great many excellent daily life villain examples, without needing to resort to real-life comicbook villainry of MK Ultra level. I wanted to illustrate that, to be honest :)

Three excellent examples and you didn't even need to mention MK Ultra.