Destino: A Collaboration between Salvador Dalí and Walt Disney 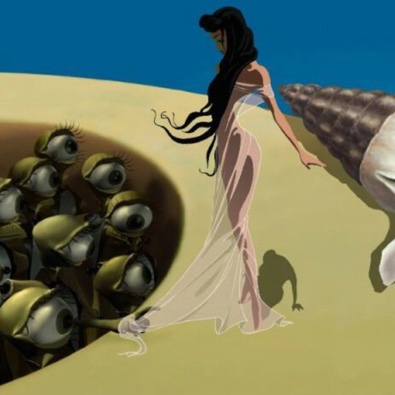 In the year 1945, Walt Disney and surrealist artist, Salvador Dalí collaborated on a short film project that took over fifty eight years to complete. The story centers around a woman who falls in love with an inanimate object that resembles a man. It combines elements of Dali’s work Persistence of Memory (the melting clocks) with the whimsical animation talents of Disney Studios.

The project was originally shelved due to budget constraints, but it was eventually picked up around the same time as Fantasia 2000 was being released. One of the original animators, John Hench, who worked on the original animation in the 1940s, was brought out of retirement to complete work on the short.

The visual effects showcased by the master painter and Dalí are surreal in nature. The protagonist twirls and comes an image of a dandelion puff ball.

Disney and Dalí were contemporaries and Dalí respected Disney’s work saying that he was the great American surrealist. Roy E. Disney eventually completed the project in 2003 earning an Academy Award for the short.

I remember watching this for a class in college. I'm pretty sure I had to write a paper on it and my first thought was "HOW?!"

It's a really spectacular short. Dali is one of my very favorite artists of the modern age, so it's wonderful to me to see his work in the medium of animation.