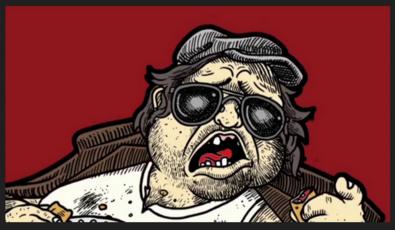 An obscure horror movie was recommended to me and I hunted it down to watch it - it was a great hidden gem for a horror fan like me. A few really effective scenes. I'm not a found footage maniac, but this movie did it well!

When I went online to look up people's reactions and reviews I found very few, but what struck me were the comments. On an indepth synopsis and review channel, so many people were happy to know about the movie, and everything that happened in it, and would never have to see it. I don't really care what other people watch or don't watch, but those comments made me disappointed that all those people were depriving themselves of seeing the actual movie and having the experience. Being told everything that happens is not the experience of seeing a good movie at all. Anything special, rewarding or satisfying about it will not exist just hearing someone explain the plot.

Even though I shook my head, I recognized the fact that I do the same thing a LOT. If there's something I actually want to see I either avoid reviews, or stick to non-spoiler reviews if anything.

For years now, I've devoured behind the scenes analysis and theorizing or rumors about movies and the movie industry from channels like Midnight's Edge and Overlord DvD. Likable, entertaining hosts with insight. To be fair, they are more focused on the behind the scenes machinations around genre/franchise entertainment.

The bizarre unfolding of the Star Wars sequel trilogy and everything around that has been more interesting to explore with the pundits I like than the actual movies have been. But even before that, with their dissection of the Fantastic Four and Ghostbusters debacles made me a Midnight's Edge acolyte.

“Everything Wrong with (blank)” by Cinema-whatever is horrendous. But I did play an hour-long analysis that agreed with my assessment of that YouTube channel and explained why it sucked. That was good. In my defense, I WAS cleaning the house while listening. So, you know. I'm not ALWAYS in the chair.

It's actually more and more rare that there's any movie I really want to see. I watch far more reviews than actual movies these days. Not sure why that is. This habit seems to be widespread from what I can tell.

I've even watched quite a few “reaction” videos (though only for shows I actually like and have seen). I never would have had interest in that a few years ago.

One time I watched some guy's reaction video to a “bad parking job” YouTube clip. Not sure how that happened.

I spent some time devouring political and media analysis too. Maybe I'll talk about that next time.

Meanwhile, look me up online to see my reactions to tweets about the comments on unboxing videos.

I don't really watch or read movie reviews. I will look at ratings but not reviews before I decide. If I decide to not watch, then I might read a review. I love watching movies, though. I'll watch the first ten minutes (or first episode) of anything. I do, however, read a ton of video game reviews because that is an enormous time investment. And also because video games are such an experience. Reading about the story, controls, or voice acting isn't going to add or remove anything.

Lol. This kinda sounds like the kid (aka me) reading Cliff's Notes instead of books. In my defense, I read half of Grapes of Wrath before my pet rats shredded it, and those rats gave the most concise and accurate review of that book.

I'll make a comparison between media and politics: with politics, in part we actually want this or that law passed, in part we feel part of a group and we root for that group; this is what is called tribalism. Tribalism has a strong emotive effect because it touches our sense of identity. With media, I think that liking this or that genre also is part of our sense of identity (do you like sports on TV? or this or that introvert weird SF movie from the 70s?). This was always true probably, but with the advent of social media the tribalism/identity thing became way more prevalent because before we were part of "ideal" communities, now we are part of tangible communities.

What was the obscure horror movie?