How Dairy Not Tip the Waiter! 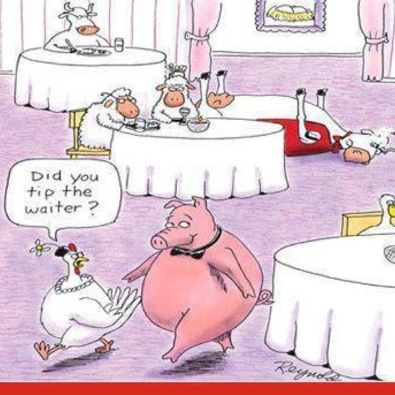 (What an udder failure.)

I once entered a pun contest and I wrote ten different puns, but at the end, none of them won.

That is correct. No pun, in ten, did.

In complete honesty, puns are one of my weaknesses. I love a great pun joke, especially when they are used correctly such as in William Shakespeare’s Romeo and Juliet after Mercutio is fatally stabbed and he says:

As an adjective, grave can mean serious, but in Mercutio’s case, grave can be taken literally like a noun and talking about a place for his burial.

Many times, a joke filled with puns can be easily lost in translation when speaking to people with language barriers. A popular T-Shirt once read: “Korean Girls Have Seoul” (as a reference to Korea’s capital and the MoTown funky soul music movement) but when the joke was retold out loud to a religious person of Korean descent, the response was, “Did you just ask if Korean girls have a soul?”


Once, I was on the receiving end of a pun lost in translation when my Korean speaking roommate thought the keynote speaker’s name, Bob Rice, was funny because the Korean word for rice is “Bap” and Bob sounded very similar to “Bap”. The name sounded redundant because it sounded like people were calling him “Rice-Rice” or “Bap-Bap” to a native Korean speaker.


Puns are a great comedic device, they get the joke done and are usually friendly for readers of all ages.

Puns are delightful sometimes. One must pick and choose the specific moment, but moments like the title to this post are just perfect. And the bit about the contest...my god, man! The Japanese tend to love wordplay and puns, just as the ancient Egyptians did. There are so many cultures throughout history that have loved puns and incorporated them into all aspects of life. Celebrate the pun! Occasionally.

Puns are very language dependant and it's surprising how much that is lost in translation. It will never fail to baffle and amuse me that the modern American English meaning for "ass" was simply based on a stupid but popular pun on "arse". It's an old, ollllllld pun as puns go, centuries old, but "ass" seems only to have switched places full with "arse" in US English in the 20th century, sometime after WW1 I think because I've read "arse" in early 20th century US writings. I'm sure there are other words that did that sort of thing... But unfortunately it has ruined the use of "ass" AS a pun.

Shakespeare wrote a lot of plays on words.

I use the name M. Organ and I draw an adult comic... Nope, no pun there.