Etz Chaim He - Inside Jokes 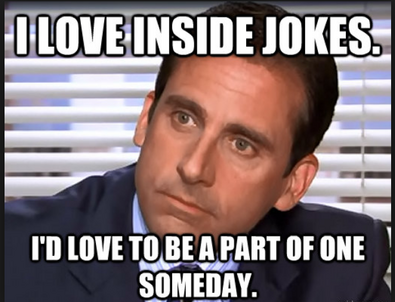 They are often created by one person and don't need to answer to editors, publishers or money-type-people. They can be made by just you, and can be made for an audience of just a couple friends or relatives…or just for yourself!

They need not aim for mainstream appeal - in fact, one of the cool things about them is their ability to be so unique and unusual.

For my part, the original idea for my comic Typical Strange (which still occasionally updates, I swear!), with its video store setting, was to reference movies all the time, both classics and more obscure ones, and be fully understandable by only the people who knew the same movies I do.

As the series has turned out, those references have only showed up once in awhile. And I usually set them up so most readers will know what's being referenced.

I don't do inside jokes, though. Well, not for friends and relatives from outside life. Most of them don't even know I do a comic.

Way back in the day, I wrote a screenplay and several rewrites featured a handful of inside jokes between friends and I - all of which were cut out before shooting. They didn't play, weren't funny, and just wasted time in the story.

I think inside jokes COULD work if done with skill, in the right kind of work. They could play as just idiosyncrasies of the characters, or amusing non sequitirs, Or humor that lets other readers IN to the inside joke.

The one group that I do like to share inside jokes with are my regular readers. Throwing in a reference to previous pages in my comic, or to characters or creators of other comics in the community is a lot of fun!

Do you sneak inside jokes into your comics for your friends or your dedicated readers?

Etz Chaim He, Dude, as the ex used to say…

I like inside jokes sometimes, but I do think that they require a lot of assumption on your part about your readers. The best in-jokes I've noticed are ones that are funny by themselves, but are made funnier when the reader knows that they're a reference to something and knows what that thing is. So a newcomer can still find the line amusing, but even more amusing later, when they've gone back and read where the reference comes from. Unless you're doing a satire or parody of popular media, assuming your readers all like (or have even seen or read) a specific work is assuming quite a lot.

I'm very meta so my comics make obscure references and since all happen in one universe they can and do crossover. The jokes are explained in the author's notes. That really came home whole doing the Star Trek tribute. Not everyone knows Star Trek as well as I might. I try to put in direct links if I even remember what precise page I'm referencing in one of my previous works. A self contained setting should refer back to itself even if it is an inside joke between characters.

I'm not a great fan of inside jokes either unless as you've suggested, they reference something that happened earlier in the story for regular readers. Even then I'd be inclined to add a footnote and page reference in the author notes so new readers won't be left wondering. It takes a lot of time, effort and luck to build an audience and anything that alienates potential new readers - well that's no joke at all.

My comic started as an inside joke that my housemates were like ridiculous anime characters. In fact, I drew it solely for them, showed only them, and we laughed about how the characters WERE them. (In fact, I joked that I had to water them down because the real ladies were not believable enough for fiction.) I don't live with those ladies anymore, and the comic characters have their own lives.

I think in-jokes tend to work best as a side joke, so if someone doesn't get it they can just ignore it while still enjoying the main joke.

I like the community spirit that goes with making web-comics so it feels nice to keep all the jokes as reader inclusive as possible and references or quotes from well known movies are always good as they are also a very shared experience. I've also had a tendency to include props over the years that are very relevant to me such as books and movie related items that mean a lot to me, but again it feels nicer to think the reader can source them if they are interested.