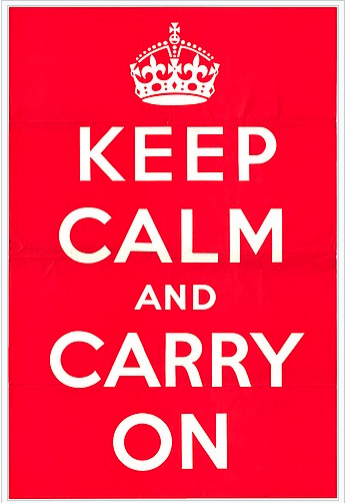 I'm not a superfan of Hitchhiker's Guide to the Galaxy, but I read some of them, liked them, and I found a lot of the characters wonderful, and many story elements have stayed with me for many years.

In that series, travelers through the cosmos could run into trouble. Really big trouble, with the huge, unpredictable Universe out there. Those travelers would carry a guidebook to keep themselves informed during their travels: That guidebook was called, of course, The Hitchhiker's Guide to the Galaxy. And what was written on the front of that book, in block letters?


It might be understandable that people are panic-shopping in the wake of the virus. But it's destructive to our fellow humans, to tear through stores and take more than we need. Many stores are imposing limits on certain products, which is good.

To be uncaring about the situation is not a good idea, either. This is serious stuff. But to surrender to the animal-thinking and panic of self-preservation is not the way either.

It's the middle way. To take it seriously, and take precautions, but not to panic.

Facing the potential attacks in front of World War II, a British Government-released motivational poster was produced. It read -


Keep Calm and Carry On.


At some point, this will pass. So keep calm and Carry On.

One silver lining of all this is that the air pollution has been radically reduced in places like Italy, where they have complete national quarantine lockdown. It's like nature popped this virus into existence just to give itself a break from us, in some aspects anyway. That I actually find calming, the fact that there are some grand scale positive effects to this, besides the fact that I get a good reason to stay home and do what I like 24-7^^

@Ironscarf - That's interesting! The "We Can Do it" posters were the same sort of thing. Now that character is mistakenly refereed to as Rosie the Riveter, but she had nothing to do with Rosie or riveting. Rosie was a big, butch woman, because that's what you have to be for riveting, made famous by Norman Rockwell and a pop song of the time. The We Can Do it woman as a motivational poster from a Westinghouse factory, only displayed for a few weeks and then taken down because those things were in heavy rotation. It was basically capitalist propaganda to prod workers. Even though the popular origins were false though, I cant deny the modern social effect, which is real and good :)

Good advice. In any scenario.

I hate those posters, but I do agree with "Don't Panic!" I always enjoyed the Hitchhiker's Guide. But the "carry on" posters can carry on right to hell. It is important to do one's best at this difficult time, but the most important thing is to not freak out and panic-buy a bunch of useless nonsense, or things that make everyone else's lives worse by not having them. Think a little of other people rather than the vast majority who only think of themselves. Isolate. Stop going out so damn much. And wash your hands. This is basic stuff.

The only good from this is traffic is good. Still I just found out 3 ppl died from it from the same family only days from each other. Question: are any of you affected financially by staying home? Here in FL a few ppl I know are forced to use personal time off with pay. Where I work, PTO, is our vacation time. When it runs out money is going to be tight. How are some of the ways to handle paying bills if working is not an option?

@ironscarf - I didn’t know that, wow. It didn’t read that way to me, but it’s all about context I s’pose

Anyone up from for virtual drawing sessions on google hangouts??

The poster was produced but never officially released during WWII. Apparently it was found to be 'patronising and divisive' and did not reflect the mood of the times. Few were displayed and it was largely unknown until 2000 when a copy was discovered in a bookshop.

Some of us actually have to put on the calm face and make certain others don't panic. Now that's fun. Keeping your composure and thinking coolly and rationally while everyone else indulges in crazed panic. Eye rolling excitement. Now be quiet and follow directions.

There are studies showing that mildly ill and asymptomatic people shed the virus at 10 times higher rates than the very ill. So it is imperative that "healthy" people are isolated. If you feel fine, there's a chance you are infectious. The population is composed of healthy infectious people and vulnerable people. So no shaking hands. Live in the cyber world awhile.

Oh yes, anyone can die from it... it's just that it's very unlikely so not something you should worry about unless you're in a high risk group. You SHOULD worry about those you're related to who are in those high risk groups though :(

@ozone: Not quite true. Stats show there's a death rate for all age groups, it's just minuscule for under 15's and large for over-80s.

It's an interesting time in the world right now. No one alive has ever experienced a pandemic event on a global scale in this way, socially and economically, countrywide lock-downs, curfews, panic buying, shortages, canceled events, bans on gatherings, closed businesses, self quarantines, all on a huge scale in every country. This has never happened in anyone's lifetime. H1N1, SARS, MERS etc were never on this level or anything near it. It's depressing but it's also very very interesting! Of course we don't have to worry about dying from it (unless you're over 60 or immune compromised), but your parents might do and the changes it's wrought in the world are amazing.