Playing Through Life is Strange 2 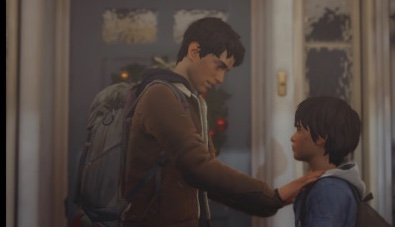 As we embark on the start of week eight in quarantine, I wonder how many people out here in Drunk Duck Land have begun learning new facts about our planet (Interesting aside: Don Walsh and Jacques Piccard were the first two explorers to reach the deepest part of the Ocean). Whether everyone has been using this time to read more books, fall down even more rabbit holes on the Internet, fall into a routine schedule, or just accept that for the present time, we are going to be spending more time indoors and isolated.

Always remember that we have a Drunk Duck Server on Discord where you can talk to other members in real time. There is also a huge Drunk Duck Awards project that Niccea is spearheading and it is actively being discussed on the forums.


Alright, so after playing through Life is Strange and then Life is Strange : Before the Storm, I became so enamored with Dontnod Entertainment, a French Based Game Studio that strives to change the way Video Games can help better and make a difference in the world with character driven storylines. The company makes challenging observations about stereotypes, ethical conflicts, and moral dilemmas.

Last week, I began playing Life is Strange 2, but I did not know what type of game I was about to start until I was knee deep in Episode One. The game begins as you play a character named Sean, a Mexican-American teenager living in Washington State in the Pacific Northwest. At the start of the game, there is a huge accident and Sean is forced to escape his hometown with his eight-year-old little brother in tow as the two flee across the continental United States. Hold the phone, this game hit several chords, and to make it resonate even more, it takes place during the end of 2016 and the start of 2017.

I am able to play this game in some doses because given the traumatic nature of the storyline, I find myself caring about these characters more than average video game characters. Sometimes I feel powerless because this game is requiring me to make choices that can result in consequences for a helpless child that the main character is responsible to look after.

Similar to the first Life is Strange, Life is Strange: Part 2 is an excellent game to teach Emotional Intelligence. It teaches the player how the choices we make directly effect the future in negative ways or positive ways.

One of the most interesting observations I have of the game is that I find myself making generalized stereotypes on other non-playable characters in the story based on the way they look only to be thrown a curveball that rewrites all the preconceived notions I had in my head. For example, a well-respected and upstanding member of society treated the two teens with disrespect and a character I thought might have been really sketchy turned out to be really cool. This game is teaching me that sometimes individuals labeled as a “low-life”by mainstream society might very well be the kindest coolest individuals along an arduous journey.

I've never tried the Life is Strange games, I need to check them out. The look of the game reminds me of that Ellen Page game called Beyond Two Souls.

Very interesting! I'd never heard of these games