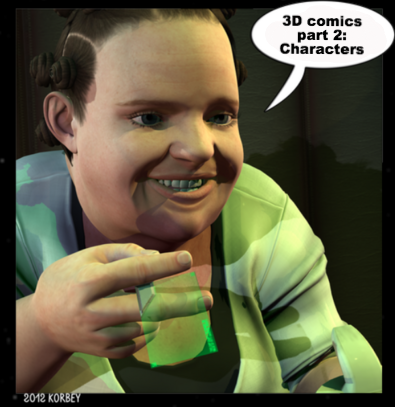 Here's Part 2 of Genejoke's tutorial on 3d comics using Daz3D. He talks about character creation here, and also gives some
info on the computer capacity you might need. These tutorials accompany Genejoke's new video versions of his tutorials. Enjoy!

In the first part I likened the the figures that come with Daz studio to character creation in games like fallout or dark souls. This is kind of accurate. You have a base figure and in the shaping tab on Daz studio you have a selection of sliders which allow you to alter proportions and the like. Out of the box these are fairly limited, but there are morph sets available to buy and some free as well. These usually add more sliders with variable effects. Weight, muscles, breast size or nose size.

One thing to watch for is that the morphs, textures and props you get are relevant to the figure you are using.

To explain, Daz release a new generation of base figures every couple of years. They are currently on the 8th generation. It makes business sense, keep people buying new products etc, but can pose a problem when starting out. Luckily they are pretty clearly marked what is what.

The new generation outfits, morphs and textures usually will not work with the previous generation, but often older outfits will work on newer ones. Morphs will not work as the base geometry is different.

The advantage of using older figures is there is more content readily available, but usually less new content being created.


Now let's go through the steps I take when making a character. Before I begin I'll know who the character is.

As an example I'll make up a character called Jenny. She's a short chubby 25 year old with glasses.

Straight off I know I'll need a genesis female base figure. I'll add that to my scene and go to shaping. On that tab is the morph sliders, I'll the ones for height and body size and adjust until I'm happy with them. I can go into more detail by selecting body parts and adjusting those individually.


Once the shaping is done it's on to hair and clothing. This is a matter of going through your content library and picking it out and possibly applying or changing textures.

The figures come with base textures and these can be modified in Photoshop if needed. This mainly works for details like tattoos and scars.

Again there are textures you can purchase and free ones to download.

When it comes to clothing the same basics apply. Most clothing will conform to the character and their movements, however some will require extra tweaking with morphs.

A newer addition to Daz studio is the D-force cloth simulation, which is handy for cloaks, dress and the like but often requires a bit more setting up. It's a feature I haven't used much myself yet. With busy scenes with a number of characters it can be quite taxing on your computer as it calculates how the cloth will react to other objects.

A brief word about your computer


This brings me to another point, your computer. Ideally you'll want a half decent computer for using Daz. It has two different render engines built in. Their own one, 3Delight and nvidia iray. Iray will give superior renders, however if you don't have a high end Nvidia graphics card it will take ages to render. With one however and it's the quicker of the two. More on rendering in a later part of this series.


Another part you're character probably will need is hair. Again it largely the same way as clothes and props, buy them or find freebies.

Once you have some clothes, hair and a skin texture on your character you may want to customise them, as mentioned earlier. There are often alternate textures available online but you can do your own.

Let's say you have a T shirt, it comes with basic colours, black, white, red and blue. It's already loaded in with the black texture on it. Go to your surfaces tab and click the diffuse box, click on browse. It will take you to where the folder the texture is located in. Open up the image file in your image editing software of choice. From there it's fairly simple if it's just adding designs on to it. A little trial and error may be required. Of course you could go the whole hog and create textures from scratch, for which you may find the UV templates handy. Many purchasable products include those, freebies less so.


Essentially, if you have a model of a pair of trousers/pants then a texture change can make them go from jeans to black slacks or whatever you require quite easily.

If you want to add holes or extra bumps, then a transparency or bump map may be in order. A transparency map does what it says, makes parts of the mesh see through. It's a black and white image placed in the opacity slot on the surfaces tab, the white areas will be visible and the black not.

Similarly a bump map will make bumps appear in the render, adding fine details. There are variations on these, bump maps and displacement maps are largely the same using grey scale images to tell the render engine what to raise and lower on a surface. Displacement maps tend to have a stronger effect. There are also normal maps, which appear various shades of purple. However for simplicity sake, let's just say the end results are largely the same.


Back to the actual making a character part as I've gone off on a tangent, once you're happy with your character, save it. I usually keep a save file of each character as well as saving a shaping preset.

A good rule of 3d is to save often and possibly multiple state saves just in case you need to go back to and change things.

Something to watch for when morphing your character is pike through on clothing. Although Daz will automatically adjust the clothing to fit, the more extreme morphs may cause skin to show through in places. Some clothing will have morphs to get around this, another solution may be to hide the body part underneath the clothing.

As mentioned before there is a lot to it, but some of these things you might not use, but having a basic understanding could help you on your way.

In the next part I'll go in to set building. 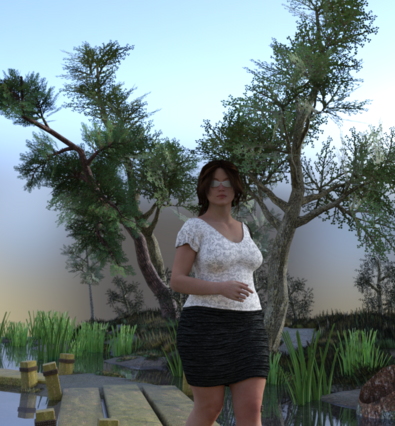