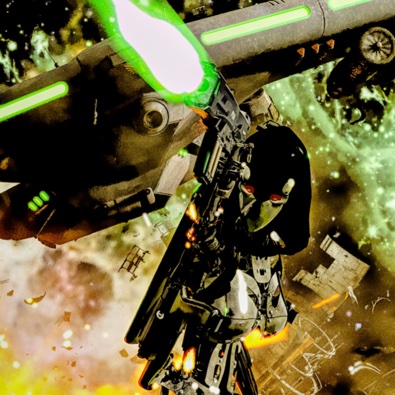 In the middle of a Cosmic Civil War, the unfavorable emperor’s youngest daughter is injected with a shot of a chemical cocktail that would result in a cryogenic sleep. Only a single frigate ship was able to escape after the Rebels attacked the Imperial army. The inhabitants of that ship are now unknown. Seventy years later and a crew, let by Captain Westervort, is about to make acquaintance with a man who needs a ship, Lord Tsartrand Tlou.

All pages are full-sized and in color. The high attention to detail when drawing three-dimensional airships, robot-mechas, and high tech buildings is one of the most noticeable standouts in the comic design. This comic uses highly skilled traditional comic layouts.

Find out about the mysterious disappearance of the Emperor’s youngest daughter and read Jovian by RobertRVeith, rated T!

Thank you for the feature! In this era of social distancing, I hope folks will enjoy a story about a bunch of people crammed into a space ship.

Jovian's RRVeith deserve this Featured page, it's an entertaining comic.