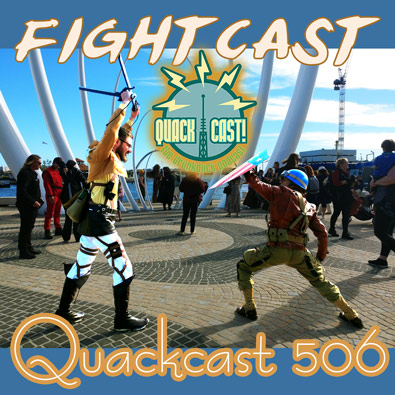 Today we chat about fight scenes! This was spurred by a post in our forums about how bad fight choreography can spoil a film. Our Patron vid was mainly about fights in our comics, while the Quackcast is more about fights in movies. One of the things about REAL fights is that they're usually very fast, ugly, stupid looking, and not very exciting. It's important to remember that boxers and UFC fighters are entertainers and sports people, those people are performing for an audience - their fights are real but they're designed to be showy and exciting, whereas true fighting on the street or in war etc is very different, it's more deadly and more stupid looking.

Cinematic fighting HAS to be choreographed usually to avoid injury, that's just how it is. However, the degree of stylisation varies. If the fighting is too stylised compared to the rest of the film then there'll be a miss-match and the fight will seem silly and weaken the suspension of disbelief. Stylised, symbolic fighting was very common with Kung-Fu movies back in the day. In the late 90s the tricks with wires and other over the top moves started to be aped by Hollywood films with very silly results: That kind of fighting suits Kung-fu movies because they're obviously fantasy in style and not naturalistic, whereas the prevailing style for Hollywood films is naturalistic acting and realism so stylised fight scenes don't fit.

Fights in comics can be done in a few ways, the easiest is to show quick vignettes of different aspects and stages of the fight. The most tricky way is to show a fight from a linear perspective as it flows from one move to another in space and time. Fights are a marvelous way to quickly build drama and tension and to show catharsis in a very compressed way.

The musical feature this week that Gunwallace has given us is theme to Hitchhikers - Operatic depth vs the simple country sounds of a banjo! Reminiscent of Journey of the Sorcerer by the Eagles, which became the Hitchhiker's Guide to the Galaxy theme, which shares a part of its title with this comic… I don’t think that’s a coincidence! Gunwallace has given us a lovely homage to that famous tune. The contrast between the rustic simplicity of plucked strings and layered tonal depth!

Fight talk in the forums - https://www.theduckwebcomics.com/forum/topic/177412/?page=27