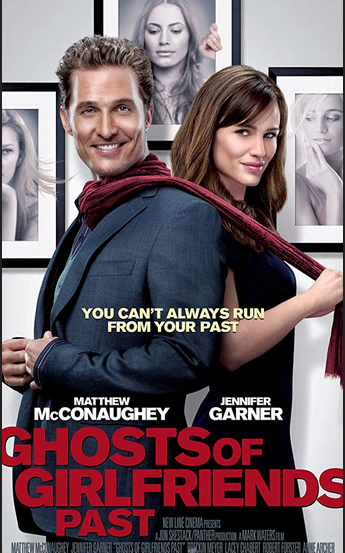 I've never seen this movie, but does he have a bevy of dead girlfriends?
always seemed like an odd concept for a lighthearted romantic comedy. “Matthew
and Jennifer! Learning the power of love! Piles of dead bodies!”


Talking to the Dead - Sort of

How many times have you had a conversation with a long lost friend, relative, or enemy? I'm not talking about
an email chat or phone call, but a literal one-on-one conversation with a dead or absent person. One who comes to life via your imagination?

If you've done this, you're a rarity I'd say - but it happens more often in fiction.

Just to be clear, I'm not talking about actual ghosts in fantasy settings. Fiction will use this in a non-magical series to allow a character to express some hidden side of themselves that they would never share with another person. Their deceased spouse or friend is another story!

It's a representation of an inner conflict a character is having, and is usually presented in an ambiguous way; I think it's usually done to be interpreted as a character struggling with consciousness. They're not exactly dreaming, but are somehow not completely with it - they're most likely talking to themselves or their own subconscious minds to process some deep, impossible-to-express thought.

There was a great Sopranos episode where Tony was sick with fever and imagining talking to his friends in some somewhat real and somewhat bizarre scenes that ended up giving him a real-world insight about one of those friends.

It's a cool way to bring back characters who have passed away and let audiences/reader see them again.

I've noticed that Breaking Bad and Better Call Saul do NOT do this. They will bring back old characters by showing flashbacks we'd never seen before, and presenting a scene that shows whatever thematic, story, or character nuance that they want us to know, feel, or think about.

Have your characters ever sat down with a figment from their past and had a chat?

And here's a better question, actually - how do you SHOW that the figment is not really there, or is a ghost or vision, visible to one character but invisible to others? Does a glowing effect on the figment character do it? Do you indicate it with dialogue?

The scene that immidiately comes to my mind is that scene from Sin City's "Big Fat Kill" story where Dwight is driving towards the tar pits to despose of the dead bodies of Jack Rafferty, aka "Jackie Boy", and his whole murdered crew. Jackie Boy's corpse sitting in the passanger seat right beside Dwight, because they couldn't fit him with the rest of the dead bodies in the trunk, starts to come alive and begins to taunt Dwight. Dwight confesses in his monolouge that this is all just happening in his imagination, so no mysterious ambiguity to be had there, but it is a cool and intense reflection of Dwight's fear and distress of getting caught by the Sin City police during the whole thing.

That said Michael Douglas was really good as the only "real" ghost, and as a propper "dead friend" for him to chat with.

I've never done this but I like it as a trope in stories. I think it works really well! I'd seen a bit of this movie before and thought it was too stupid to bother with... but had to watch the whole thing after you posted this! HAHA! It WAS stupid. It's based on A Christmas Carol but it's about a super wealthy, handsome, charming cad who doesn't beleive in love anymore, he's hanted by the "ghosts" of his exs (almost all just one night stands really), and also his lothario uncle who raised him after his parents died (Played by Michael Douglas, it's great casting). It's a romantic comedy about losing cynicism and finding love, but it's grating and Mathew isn't suited at all to that sort of film. Very annoying movie!

Interesting, I think I prefer flashbacks to some kind of hallucination, but its not that I don't like it. If it fits in the story then its OK.

Well the “Ghosts of Girlfriends Past” movie is sort of like a combination of “It’s a Wonderful Life” and “Scrooge” where a (sort of) guardian angel shows a playboy how he had treated the many women of his past. But, yes, I’ve had an ongoing ghost character show up in my Tag Forester comix; Tag’s Grandpa Forester. Grandpa Forester is a crusty old private eye that comes on the scene in Tag’s dreams to point him in the a different direction; not necessarily in the right direction but from an old fart’s perspective. He first came on the scene in “Smelling Brimstone Through a Nail Hole” (Mature) https://www.theduckwebcomics.com/Tag_Forester_in_Smelling_Brimstone_Through_a_Nail_Hole/5612845/ And then, in the latest Tag Forester series, “2 Center Mass” (Adult) https://www.theduckwebcomics.com/2_Center_Mass/5644341/

One of my characters has conversations with dead relatives in dreams. I've had them myself. In both cases, the dreamer is aware that the figment is a dream but converses anyway.

Thinking about your comment on the movie, I came up with, "He's a charming psychotic murderer. She's the criminal psychologist who falls for him. Enjoy the romance of Mr. J and Harley!" ;-)

I've done it for real in dreams. Had a friend who died of AIDS show up in a dream because he wanted to see how I was doing. So I might do similar in my stories. But my favorite will always remain "American Werewolf in London" just so cool for a monster to be talking to its dead victims -- and they answer as themselves not necessarily as some guilt ridden subconscious.