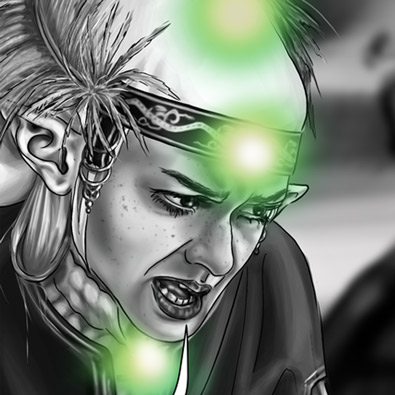 While scouting in enemy territory young Haldeina ears a strange sound in the woods and rushes to investigate. What she sees astounds her! She beholds a huge and wonderous beast, part lion, part wolf… obviously mage created. It's badly wounded and near death. Although she fears it she's moved to help it. They can't communicate and yet they seem to understand one another, the magestic creature is clearly inteiligent, but what is it? This is the story of a nation at war and a royal girl who has taken a male idenity as “Eidon” so she can join the fight. It's a fantasy story with romance, action, and magic! The art is lushly drawn in black and white mostly, with high detail on faces and clothing.

Ahh oh my gosh thank you!!! I just realized my Vincentianni is up on the "featured" list! I'm so truly honored, so much more work to do but I hope folks come to love my babies as much as I have over the years <3 Less of a Mulan style story and more about taking control in life I suppose, but of course I know what's coming so won't give away too much. It's always fun to hear what someone else sees in a work! Thank you, thank you!

That art looks brilliant with such high resolution!

It does look gorgeous!

She has lovely art!

Very happy to see Matriarch being featured! Such a wonderful comic by such a talented creator! ^_^

Ahhh! Such a great comic and deserving of a feature!!! I'm so proud and happy for ChipperCartreuse! <3