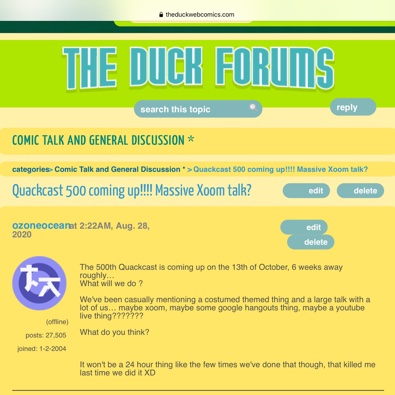 The Quackcast is created and inspired from original content from the Drunk Duck 🍺🦆 community, current events in the Comic World, and thought-provoking ideas. It has been running since the end of 2010, which is nearly a decade, and the 500th Quackcast episode will be airing on Tuesday, October 6, 2020.

The podcast originally started with the learned OzoneOcean 🇦🇺🌏🌊 and the gentle Skoolmunkee having deep conversations about DrunkDuck 🍺🦆 creators. After Skoolmunkee’s conscientious departure from the Quackcast, the hilarious comic, Banes, stepped into the scene, creating a whole different dynamic that was reminiscent of late-night comedy skits. Overtime, and hundreds of episodes with special guests, OzoneOcean 🇦🇺🌏🌊 and Banes brought on Tantz_Aerine and PIT_FACE onboard the pirate ship, and that is where it has been for several hundred more episodes.

The weekly episodes also include original Comic Scores written and composed by our very own, Gunwallace. There are also times that OzoneOcean 🇦🇺🌏🌊 and I (kawaiidaigakusei) contribute Featured Comic Reviews. It is definitely a community led project that has taken time, a concerted effort, and synchronized schedules in order for it to come to fruition every week.


We Would Like the 500th Episode to be Special

-OzoneOcean 🇦🇺🌏🌊 has suggested a Large Video Zoom Call that all the Ducks on the site could dial into. As it will be happening in early October, all Ducks dressed in costumes would be spectacular (which is great for camera-shy folks because masks are allowed). The discussion thread was suggesting that everyone dresses up as a Vampire 🧛‍♀️🧛🧛‍♂️ as the default costume.

-An idea I suggested would make the 500th episode a Showcase of Talents of the Drunk Duck 🍺🦆 Community. Imagine the possibility of an open mic talent show of sorts, where users can submit clips of themselves performing music or jokes or reading stories they have written. It would showcase several contributions from everyone who wants to contribute an audio clip and be more of a treat during the pandemic so we can all feel much closer.

For Example: A Drunk Duck user harbors a secret ability of playing the marimba and wants to put on a mini concert for the Drunk Duck audience.

The Drunk Duck🍺🦆 user would need to record themselves playing the marimba (there are several free audio recording apps available for smart phones and tablets). Then email the file to me at kawaiidaigakusei(at)gmail(dot)com, and OzoneOcean 🇦🇺🌏🌊 would be able to splice the sound clip into the episode seamlessly.

That is all you would need to do in order to showcase your talents and put on a mini-concert for the Drunk Duck 🍺🦆 Community.


Does this sound fun? Be part of the 500th Episode and contribute a bit of your creative genius to make it a masterpiece! 🔥♥️🔥


Share Your Thoughts and Ideas on the 500th Episode Brainstorm Thread!

@kawaii I practiced my marimba part on the piano just to learn how the music sounded. Or I would "air marimba."

I know how to play the marimba, but I lack access to one. 😭

I'm looking forward to contributions. If we don't do Zoom we'll set up some sort of group google meeting.

@Banes— Thank you, Banes! 😃 I have this running joke in my head that the marimba player in the marching band has it easier than most because they have no way of practicing their instrument at home, making their job easier.

Dang I wish I could be there. I gotta work.

Thank you, kawaii, for the lovely, kind sentiments; my heart is warmed! I really hope one of the Ducks plays the marimba. I would love to know where they keep that thing!

seven years already since we did the last radio play? Had three parts in that last one and thankfully only one page of script to draw.

I loved the radio scripts project you guys did a while ago where people would send in scripts from their comics and people would perform them. Would love to see that again :D

Honestly, I'd love to see more projects for the whole community in general.