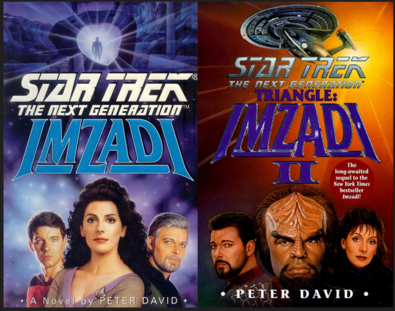 I have been a fan of the writer Peter David for many years. After being away from comics for some years, I discovered his run on the Hulk, and also found his work on the Star Trek novels. He was the best writer for those, for my taste anyway. There were plenty of in-jokes for fans in those stories, and they felt like episodes that could have happened but we never saw - though most of them would have been beyond the constraints of a TV budget.

As books tend to be, they were also a bit more internal, and may not have worked as live-action episodes. They also were able to freely jump around in time and see the characters at different ages, and jump back to earlier decades of the franchise. Not so easy to do convincingly in live action, even with modern technology!

But what I found interesting is an interview with Mr. David where he explained the unique challenge of writing in an established world, and ‘writing around’ an existing, ongoing series of shows and movies: at the time of his Star Trek heyday, Peter was writing Next Generation books while the series, and then the movies, were still being produced.

It is very similar to fan fiction, where a writer is playing in these pre-existing worlds, with pre-existing characters.

So he says he had to write the illusion of a character arc. Picard had to SEEM to go through a character journey, but by the end of the story, he would be the same guy as he was at the beginning. A couple times, he did books that were mostly flashbacks, like fleshing out the backstory of Riker and Troi and their relationship in Imzadi.

There were a few of his books that I wished had been episodes. Q-Squared was a favorite, as was Imzadi 2. He did a great story called “The Rift” that featured the crew of the Enterprise from the original pilot episode under Captain Pike, and then jumped forward to the late days of the classic crew under Captain Kirk. Cool stuff and it was satisfying to imagine this stuff “really happened” between the episodes and movies.

This kind of Non-Arc Arc shows up in a lot of episodic television (including the Next Generation series of course). It's also a good approach for fanfiction I'd imagine (although from what I've heard, much of fanfiction doesn't do this, and breaks the status quo of the series in question). If I were going to do a fanfiction, I think that's the approach I'd take, fleshing out what's already there and maybe telling an “untold story” that still leaves the canon intact.

Anyway, those are some straggling thoughts on our recent Newsposts related to fanfiction.

There were some great bits in the novelization of ST:tmp that were dropped from the movie. There were also some novels going over the fifth year of the Enterprise five year mission. I was very pleasantly surprised by the Star Trek Continues fan series that finally dramatized all that especially the whole prelude of when Kirk gets his promotion and Enterprise enters spacedock and the long conversation with Admiral Nogura. That's one reason I chose TOS for my fan comic. There's a lot out there but there for inspiration. Though I did move it to an "alternative " universe by a trick similar to the original Franz Joseph Star Fleet manual used to explain it showing up in the 1970s. What can I say, I wanted to have Pike, Kirk and Picard all in the same fleet.

Speaking of adding depth: I remember from way back how I made the mistake of first reading J.M. Dillard's novelisation of "Emissary" and watching the DS9 episode that it was based on afterwards. That way, the TV version looked to me like a hapharzardly cut plot summary that seemed totally incapable of making half as much sense on its own. It was a key moment for my teenage self (and by extension my older self, too), because that day I realised two important things: 1. books are way better than TV, no matter how much flashier the latter's special effects may be, and 2. it is important in which medium a story is being told. Such are the dangers to the young mind of reading "...that mentally enfeebling mass-produced junk why won't you read any proper novels instead?!" ;)

Ah, Star Trek novels. I loved them when in my teens, especially TOS ones. Literary snobs tend to look down on them as cheap mass market rip-offs - mere bread-and-butter jobs for authors whose careers wouldn't take off for reasons quite apparent after the first dozen pages. With a few of them there is certainly a grain of truth to this. However amazingly often they expand the Star Trek universe, add depth in many ways and feature kickass plots that make me wish they'd have done more of that in the shows. No wonder, says my older self, because no matter what else you think about the likes of Diane Duane, John Vornholt or John M. Ford, they are/were experienced professionals. Yet they took enough risks to show that getting the bills paid couldn't have been their only motivation. Any author who manages to sneak some amount of originality into such a rigidly standardised universe with a fandom famous for its pedantry and not get lynched is clearly not to be underestimated.

I read a lot of Quantum Leap books as a kid. Those were fun too. My favorite was Prelude (a backstory to the series).

This reminds me of the Trigun me vie. Trigun is a fun anime series that basically goes to shit at the end (which is common in anime series). The likable main character is irreversibly altered. Another fun character took a turn and then died. The big reveals of the world were a bit much (turned it from wild west fun to fighting super seriousspace alien plant beings). Anyway, I saw there was a movie, and I was very hesitant to watch it. Then I learned it was set in the middle of the series, not at the end. So I watched and enjoyed.

Some of the novels were adopted as fan productions and others inspired later Canon episodes. Some of the fan done series are better than the network done stuff.

Good writing thoughts! Take me, Troi, take me with your *mind.*