So now we got Behaviorism down, we're ready to talk about the Social Cognitive perspective to how human personality develops!

This is one of the major approaches to Theories of Personality, and a perfect example of how psychology theorists build one off the other to develop perspectives and add to what has already been penned down before.

The most important theorist for this school of thought is Albert Bandura. 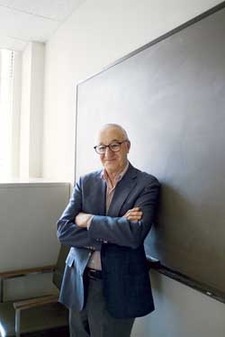 That is because Bandura built on the work of Behaviorists.

He posited that humans do learn and develop aspects of their personality based on the principles of behaviorist types of learning (such as classical and operant conditioning). However, these are not the only elements that need to be considered in learning. There is another one: the environment is crucial in teaching the individual patterns of behavior through observational learning, without classical or operant conditioning being needed. The very familiar aspect of ‘learning through imitation’. More about that in a second.

Another, just as important aspect that Bandura added was that when any type of learning takes place, the way the individual learns is unique, because factors unique to that individual affect what is being learned. That's why two people exposed to the same stimuli that produces the same responses may not learn (or be conditioned, if you like) in the same manner.

How can that happen, if the mechanism of the learning process is the same, and the stimulus produces only one response?

The answer to that is Cognition: Each individual's thought processes intervene before, during, and after a stimulus is presented and a response is produced which will make the individual learn completely different patterns than someone else exposed to the same.

Bandura called these thought processes “mediational processes” and identified four of them:
1. Motivation: The will to engage into a behavior. The individual does a cost-benefit analysis of the potential reward/reinforcement that the behavior will yield. If there aren't any, or the cost outweighs the benefit, then the person is unlikely to ‘learn’ or engage in the behavior being taught/observed.

2. Attention: As any teacher knows, if the student isn't paying attention, even the best lessons won't be learned. The individual's attention has to be attained enough for the stimulus-response/behavioral pattern to be observed and processed in their mind. If attention is not attracted, then the stimulus/response is classed as non significant and it's unlikely that the individual will learn from it.

3. Retention: Again, the best lesson means nothing if you can't remember it.

These mediational processes vary from person to person based on various personal aspects, including genetics, culture, previous experiences, physical condition (i.e. if you are ill), and a lot more.

The important thing to remember is that all of the factors keep interacting with EACH OTHER- which means that they impact and are impacted by each other all the time, in a dynamic manner, as the individual develops: 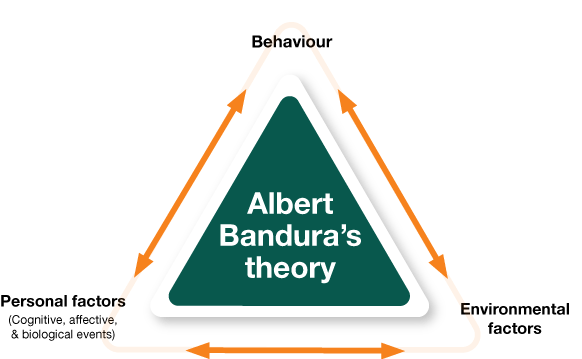 Okay so we got Behavior and Personal factors down. How do the Environmental factors …factor in to shape personality?

By Learning by Imitation of course!

Setting aside other obvious environmental aspects that may impact personal factors (such as health), environmental factors hinge a lot on what the individuals learns by imitation, in the process called Observational Learning.

While Observational Learning happens throughout our lives, it's especially crucial when it comes to children. Children will watch how adults around them interact, how they behave, and they will imitate this behavior. That's often what is happening when children are role playing or playing with dolls.

Bandura demonstrated this by the now-famous Bobo Doll Experiment where he demonstrated how children learn from the behavior of adults by basically getting the crap beat out of an inflatable doll called Bobo. (Click the link. It's a nice fun video, and it'll keep me from writing even more theory in this article.)

Following the diagram you will need to determine and consider all three factors that will shape your character's personality:

1. What is the environment he/she/they grew up in? Not only in terms of culture and general setting, but also within their family: who was the person they imitated the most and why? who was the person they imitated the least and why? How many people did they start imitating/learning from as they grew up and why? Are there any behaviors they rejected and how did they learn that?

2. What are they most likely to pay attention to in terms of behaviors and patterns around them? What will be dismissed, or won't be perceived and most importantly- is there anything that would make them notice/pay attention enough to shift their behavior? And if yes, how will their behavior shift?

3. What are the individual, personal factors that will shape how they interpret the stimuli they will be learning from? From genetics to emotions to thought patterns.

By answering these questions, you are again led to not only making a fleshed out personality for your character, but a solid background story for them at the same time.

Once again- this is a personality theory ONLY. While there are a lot of elements that have a solid scientific basis, no single personality theory, including this one, can explain the sum of human personality and behavior. Psychologists use most, or even all, of the theories available as tools to better approach what the focus of their study is rather than be monoliths that only look through a single lens. Therefore DO NOT try to apply the personality theory to youself. Only use it to build your character if this theory helps your story and your narrative more than the others.

No worries Xade! Do what works for you!

ps godmode doesn't go to anything

orry but my eyes glazed over about a quarter of the way through. My characters are usually thought out pretty well. As the story progresses they reveal more and more to mean I enhance the story as I go. Each chapter is drafted out as a guideline then I get down to writing it out, adding and pruning as needed. Sometimes I create short stories to get to know my characters better. I write a short synopsis of the plot just to see what it's about the I toss the character into the story to see what develops. From that, I flesh out what I learned about the character, adding to it until I have a full bio. with flaws and everything. It's a decent system and very flexible. Sometimes, once I complete the first bio I'll take the character through another short story or two so I can make sure he or she is complete. Once in a while, the story is just me interviewing the character.

More to the point: I think this theory is an awesome tool to create backstories that make sense, and I can fully recommend giving it a thought even if you don't actually plan on revealing any of the backstory. It means more preparatory work, but in the long run it makes it so much easier to figure out how your characters will behave in any given situation. I think of it as a great guideline to keep them consistent, no matter how complex you make them.

Teacher's 101 - as you said. It's another theory that influences what I do every day, and it has all kinds of implications. It serves as one of the major legitimations for age ratings, too. Could your webcomic accidentally teach kids that violence is a neat solution to every problem or that girls are irresistibly attracted to guys whose behaviour is even uglier than they look (etc.)? - Give them some positive reinforcement by adding a label like "Come back when you're old enough or at least don't you get caught." which is incidentally a prime example of how careful you have to be about what you actually reinforce... Wait, that's behaviorism from the last article, isn't it? Anyway, I'm starting to sound preachy, and that's the last thing I'd want.

Bravo1102- totally ok if you do it with a professional helping out through the process :D

Yeah, too late about applying it to myself. I've been in cognitive therapy for decades. It's pretty firmly integrated into my thought processes. Another part of this is learning styles, that there are various ways minds look at stuff like visual and kinesthetic learners.