Comics Vs Books Vs Illustrated Stories 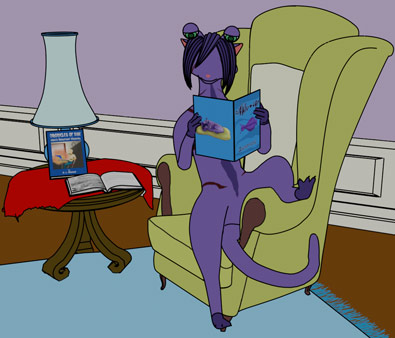 I was browsing my twitter a few weeks ago and I noticed someone I follow ask if there’s any webcomic hosts out there. Of course I said the duck, wings down. One thing led to another and the conversation turned to when I could read it. They said they were waiting until a number of chapters were done before posting their comic. I can totally relate. When it comes to my book it has to be great before I indie publish it. My comic, on the other hand is completely different. I try to keep to a set schedule. A book and comic are two different sides of the same coin. How is that? Let’s have a look!

I think I can safely say we’ve all read a book that kept you flipping/swiping pages to see what happens next. I also know we have each found a webcomic that does the same thing. This is a webcomic site, after all, one of the oldest and, in my opinion, best that there is. I’m just quackers over the duck, even when he was intoxicated. Anyhow, let’s grab our magnifying glasses and examine both types of stories.

We’ll look at my personal favorite, books. When writing a book, you must use words to create the world in the reader’s mind, add details, emotions, visceral reactions, ect. Describe the scenes. Write about the adventure in a compelling and hopefully page turning way. It’s a lot of work. You must hook the reader by the nose and reel them in.

Keep the reader immersed in your world. Can she hear the TV playing softly downstairs? Not without coming up for air she can’t. Any writer worth his or her salt can weave a story so compelling that the reader must wrench their mind away from it so hard that is almost like a plunger unclogging a sink. PWOP-pwop-PWOOP-pwop—POP!

A webcomic is far simpler to work with but harder to do, especially if you don’t have the drawing skills. Scene building is easier, just do an establishing shot and show the reader what’s going on there. There’s no describing the area, the tension, the conflict, just draw (or 3d) it. You can’t tell the reader what emotions the characters are feeling with visceral reactions, you must show them what they are feeling like a movie does. Did your character get bonked on the head? Show a dazed expression. Even a character with eyestalks like my Zeep can show when he’s knocked senseless. 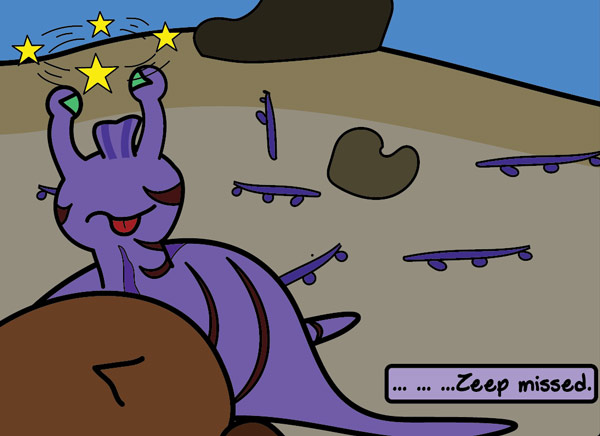 Your page is your canvas and the panel is the window into your world. You draw it, display it. You show the reader you don’t tell them. The “show don’t tell” mantra is especially true with webcomics. A book is still telling the story but you suck the reader into it with words and use the imagination to show what’s going on.

Each medium has it’s pitfalls and joys. On one side of the coin you draw it, on the other you write it out. Flip a coin enough times over a fractured sidewalk and it will eventually land in a crack on its edge. This is where the worlds of webcomics and books merge together into something wondrous. I just read a wonderful little webcomic where the artist and a writer took a couple of minor characters and did an illustrated story about them. An unusual combination that takes true skill do do well, and this was one of the best I’ve seen in a long time. The story had me turning the page, breathless with anticipation. My pulse raced, my emotions surged and my finger kept clicking that next button until it was over and I leaned back with a contented sigh, marveling at the pure beauty of it. See the Spinneret story here https://www.spinnyverse.com/comic/league-of-canadian-superheroes-cover

Now, not just anyone can make a good comic or write a great story. When it comes to the comic’s plot those two blur together for you need a good storyline to make a good comic unless it’s a gag or experimental comic. It takes a lot of hard work, and often a lot of studying to hone your chosen craft. I’ve read many books on the writer’s craft and studied how to draw with the same dedication. I can give you links to some wonderful books, just PQ me.

When it came time to do Growlution I sat down and brainstormed for the story. What kind of story did I want? Did I want a magical adventure like my old Insanity of Xade? Or something simpler? I went simpler, so simple that I started from the DNA up, literally. How many main characters do I want? I chose two. Conflict or violence? Conflict. My questions went on and on. Eventually, I scripted out a few loose chapters, divided into pages and panels and set to work drawing it.

I hated, Hated the first few pages, so much that I almost threw in the towel. But I kept going. I withheld a few pages, showing only a few good friends who encouraged me to publish it. So I did, right here on the duck. I got a hold of a few old IoX fans and started advertising it on twitter. Pretty soon, I had a tiny loyal fan base and settled down to weekly updates. All because I got off my duff and published my comic.
Got a comic or book planned? Get up a good buffer or a draft and go! Or just dive right in! Don’t put it off! You’ll never get it done if you don’t get off your duff and do it. You only fail when you fail to try!

The artwork is what draws you towards the comic and the story is what keeps you coming back. I could instantly name lots of examples both on the Duck and elsewhere where it's the other way round or not quite true either way, but it's still a good rule of thumb. I also noticed that those books that really get me hooked often take a somewhat cinematic approach. It's hard to describe how that works, but it's a certain mix of crisp description for clarity and a lot of toying with language to add atmosphere. The tricky part, the way I see it, is getting the optimum balance between the two. Even at the risk at not making too much sense now - trust me, if I were to expand on it, it would eventually - may I add that it basically works the same way as making music; I found that both storytelling and drawing comics profit greatly if you think of it as a way of making music, only without sound.

Great article and very absorbing reading in itself! I've always enjoyed slice of life and real life stories the most in any form, either as books, comics or movies but the one thing I love most about reading them as comics is that I feel I'm getting so much more from the artist too. Even if the art is still a bit rough or lacking in experience I can still feel really moved by what I'm reading and looking at because the way they depict the scene and the people in it still conveys something about the writer/artist that would not be seen in text only. 'Friction' the Duck comic that inspired me to start my own some 11 years ago was just such a comic and in the first few pages the art was pretty shaky but her focus on the things that really mattered to her as she put pen to paper, mainly the text and expressions, had me hooked from page one.