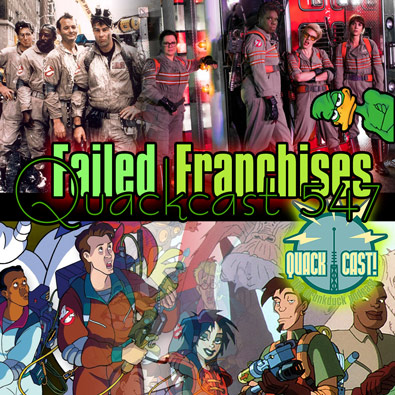 There seemed to be a lull for a while after the 1990s and the massive sequel craze of the 80s, but nowadays we're back in full swing again with sequels, reboots and reinvisioning of film and TV franchises.
Banes noticed a distinct pattern of behaviour that occurred around bad or failed franchises: The makers would chose to go against what existing fans liked about the property in the fist place, usually in order to appeal to new fans. When both new fans and old ones dislike what they do, they attack the fans and blame the fans for failure of their version. Then they'll search and find a new franchise to mess up. It's rare that people own up to or admit to failures anymore, it's usually always the fault of the fans for being too “toxic”.

The 2016 Ghostbusters reboot is a great case in point: a film reboot of a hugely popular and successful franchise staring tried and tested popular comedy actors, it turned into a failure. One popular narrative was that it was caused by “toxic” fans and their sexist online campaigns… while those people certainly did exist, a simple viewing of the movie is enough to see the real reasons it failed: They weren't sure what audience it was intended for. The story and storytelling style, the costumes, the sets, effects, lighting, toy-like props, and many of the jokes were specifically aimed at young children, while many of the situations and most of the other jokes were extremely sexual and adult in nature. So what we got was a young kids movie that wasn't for kids- this means adults watching it feel bored or patronised and groan over the childish humour and the kids that could appreciate that content either aren't allowed to watch it, or if they do they're also bombarded with very problematic and gross adult sex jokes: none of this was the fault of the fans.

Compare that to the original 2 films:
They were never intended for a very young audience. Nothing in them was aimed at young children. These were bawdy, young adult comedy fantasy “horror” films. In keeping with the context of the time they had adult humour disguised with double entendres, or hidden with tropes and metaphor. They gained a following from young audiences anyway because the adult content was subtle enough to pass, and the story and style was broad enough that it didn't need to be dumbed down to be understood by younger audiences, in this way they appealed equally to all ages.

This week Gunwallace has given us a theme to Phantasos: Hot, dry desert. Orange sun. warm winds blowing. Shimmering mirages…. Electric arabesque. This is a gloriously distorted riff filled trip into an exotic world of sand and dunes, with beautiful minarets rising out of the distance, sparkling in the harsh light.

Yeah they tried too hard to please everyone when they should be focus on true fans of the Franchise. I will say the latest installments of the series looks very interested to me. I will watch that IF it comes out.

The MCU is the inverse of this😏