I just finished a rewatch of The Mandalorian series and one of the things I thought about was the vicious profiteering and scramble for money (or ‘credits’, or valuable metals or what have you) that indicates what kind of economy is at work in that show.

Granted, so far we've only seen the fringes of the Galaxy after the collapse of the Empire, so things are chaotic. A new government is in place, but we haven't seen much of how that's working; like I said, this show takes place mostly on the untamed fringe worlds.

Still, the world of profit-driven scoundrels and mercenaries in Star Wars is an interesting contrast to the world of Star Trek, which from the original series, took place in a world without money. The details are generally kept vague, but little glimpses of how it all works show up from time to time.

Generally the shows take place on Starships, not on Earth, so there is no money changing hands among the main characters. It's through aliens or time-travel that we see these things revealed.

When Kirk and crew travel back to 1980's Earth in Star Trek IV, they have trouble when they realize these people are “still using money.” 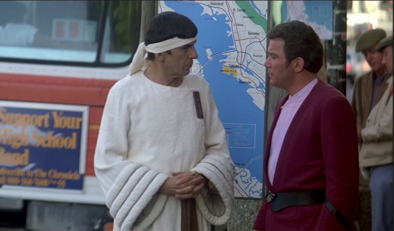 In TNG, Picard and crew wake up some cryogenically frozen earthlings from our time, and an investor who planned to wake up to a massive fortune finds that money is meaningless in the future. Picard tells him that humanity has evolved beyond the pursuit of wealth. They've eliminated hunger, poverty and want.

Like I said, the details are kept vague, but we understand that humanity no longer suffers from issues like homelessness, war, or poverty. They do not use money, but the challenge and purpose of life is “we work to better ourselves, and the rest of humanity.”

We still see a drive among people, though. Starfleet officers go through challenging training and put themselves in great uncertainty and danger, exploring the Galaxy. Lots of officers die out there or find other horrific fates. On DS9, Ben Sisko's father runs a restaurant and is despondent when the place is closed briefly during a crisis on Earth. Picard's brother still works hard maintaining the family vineyard (I'm not really talking about the newer Picard series here, where worldbuilding gets sloppy and the bones of this world seem to be bent out of shape or discarded).

Could something like that ever evolve in humanity's future? I hope it could. To be clear, I don't believe there will ever be a Utopia that doesn't have some kind of money or trade. I believe there will always be people who are richer and others who are poorer.

But my hope for our descendants is that at some far off time can have a society where the basic needs of all people are taken care of, and that the focus of our lives can be more about enriching ourselves, finding our true path in life to serve our own satisfaction and add to the enrichment of the rest of humanity.

I can believe could happen someday! For what it's worth, I'd sure rather live there than in Star Wars world, much as I enjoy watching them Jedis and Mandalorians!

I rewatched the original series a year or so ago. While we never see money, there's definitely an idea of compensation. Several episodes revolve around some natural resource a planet has and the Enterprise is supposed to get it some how (by trade, coercion or violence). There's more than one episode where they encounter federation miners or folk on some other type of work colony who endure significant hardships for the the promise of some undefined benefit. So there is something like money, at least in the first series.

I'm reminded of the Empire of Zakuul in Star Wars: The Old Republic. They are this weird faction with Force Users who see the Force as a gift of their Emperor (Who is obscenely strong with the Force, he makes Palpatine look like a joke.) and thus the various force using orders in it are everywhere on the Light Side and Dark Side spectrum, most usually somewhere in the middle. The regular folk are given stipends that more than exceed their daily needs so most people don't even need to work (Their Military is Mostly Force Users and Droids.). So what do these people do? Anything to alleviate their boredom. As a People they don't suffer major hardship (Until Arcann and his sister take over.) And thus engage in debauchery and gambling and the like. The people are friggin' BORED by being a Utopia. Might be wondering how they fit in with Republic and Empire, Jedi and Sith? The beginning of the Expansion they Curbstomp them. All of them. Simultaneously. Just goes to show how a utopia can go.

YES! I forgot about the replicators. That changes things a lot. So barter WITHIN the Federation is unnecessary to its function (or at least within Starfleet). Barter is voluntary and based on the need for special goods (unique things, hand made items, antiques etc or special services). As you say @cdmalcolm1 it requires abundant power, replicator technology and the free access to it. That's impossible for us but we can see it in the future from where we are: 3D "printing", and nuclear fusion - 3D "printing" isn't up to the task yet and Nuclear fusion still doesn't produce more power than it uses.

Another version of this system that we do is in video games. Particularly free to play video games. Sure you can purchase in game cash or “metals” to get items quickly BUT, you can also farm and build items to trade with. no money exchange between players and in game NODES that can offer you something you can’t get from farming or real world market place. So it can happen.

Ozone just reminded me of an episode where things are made. I don’t remember which ep or season. Okay, so Star Trek doesn’t need money, when really it is energy that drives their economy. Remember, the computer can “replicate” just about anything so long there is enough energy to produce said item. Every household they have ever showed they have a replicator in it. No one is hungry or bored. Just ask the computer to make it for you. They did however showed that quite a few people still will grow their own foods, make meals from scratch, Build tools by hand, and so forth. My best guess is that they found a way to make energy readily available at a moment’s notice. Even their LCARS tables and scanners have an enormous amount of energy that they can use when things look bleak. So they must trade energy or energy efficiency tech for modifications on a trade for alliance or dilithium crystals. They almost always do this “for the greater good of the federation. “

So what makes people work in Star Trek? What we see in the world is mainly a scientific MILITARY utopia, that's important to remember. In the military what makes you work is the structure of the system and peer pressure, while rank, power and status make you want to advance. Money isn't a big factor inside of that world because a lot of what you need is allocated or rationed to you... But what if it's something you WANT rather then need? Like a new violin or special jewelry? Do you learn to make it yourself? Wants that are unusual and can't be planned for are what you'd need money for... So how would you get those things?

@Kam You can outlaw money and still have people do all sorts of unpleasant jobs, just through other pressures- Think about it, in many structured intuitions like schools, the military etc you can have people that will do dangerous or unpleasant tasks because they're told to- because of rank and the structure of the system. Yes you get paid in the military but generally not for the tasks you're asked to do, and it doesn't usually drive your form of occupation, rank, power and status do that. Besides, in a future advanced world like Star Trek presumably nasty and dangerous tasks will be automated.

The economics of utopia is always interesting. Edward Bellamy's Looking Backward proposed the type of economy bravo1102 mentions in his second comment. Ancient Spartan society, at least through the eyes of writers like Plutarch, was without greed and money and want, but possibly in the same way that Soviet Russia was 'without' them. Many of the communal utopian communities that formed in the 60s and 70s tried to do without money, but the desire for certain commodities (such as cigarettes) often forced them to re-enter the wider market economy again. Even Star Trek's Federation was forced back into trading with money by their interactions with the Ferengi. Suddenly strips of gold-pressed latinum were mentioned in episodes, particularly in Deep Space Nine. Federation personal got money (somehow). They tended to gamble with it. And then there's ST:TOG's Harcourt Fenton Mudd ...

Money is not something that is essential for any society to function, and part of the utopian nature of Star Trek's future is that they operate in a post-scarcity universe. They don't have need for money for essentials. It's not very difficult to imagine a world where the basic needs for life are covered, and anything extra has to be traded for in some way. Money is worthless if it's not given value. It is a neutral good with a widely consistent value for transactions that cannot function in terms of barter, and it depends very heavily on people believing that it has value. That's what gives money value at present: belief.

Star Trek does have a form of money but with other races outside of earth. Latinum and dilithium and other precious metals. There is a form of bartering on earth and it is services in education and career goal(s). Information is commodity.

You don't need coinage or any sort of physical money, just worth. Cleaning the streets gets you this much food and board and chances of advancement and investment and folks did it. Then built companies that employed others to do it. There have even been cultures that are very cash poor with little specie that thrive on paper credit and trade.

There will will always be some form of money because there are lots of necessary, but unpleasant jobs that people will only do for money, well, unless you want to bring back slavery and force people to do them. Would you want to work as a garbageman, sewer worker, bomb disposal expert, etc., etc. for free???

Archeology is finding that civilizations before actual money still had trading of goods and services beyond simple bartering. Writing may have evolved from the necessity of recording transactions and that folks received credit for things thst was kept on account by another that they could then trade with others for what they needed. Money without money. Credit cards and checks via those little cylinder seals found through ancient Mesopotamia.