The Most Marvelous DC Comics Character (I Only Learned About Recently): Zatanna Zatara 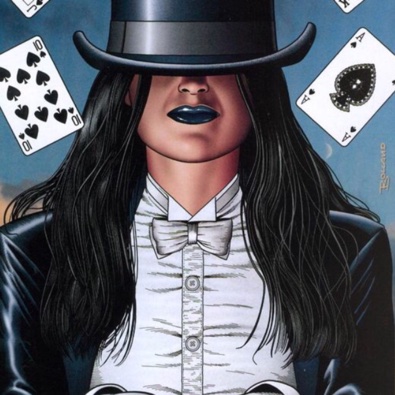 It is always a good time when I learn about a fully-fleshed out character with a history, family tree, team affiliation, famous love-interest, and storyline. It is almost more of a mystery when a new character is discovered so late in the game I have to question why their existence hovered far below the radar that they flew dangerously close to obscurity.

Zatanna Zatara is one relatively unknown superhero from DC Comics, with affiliations to The Justice League Dark and a former lover of John Constantine. Her parents are Giovanni “John” Zatara and Sindella, a member of the Homo magi.

She is a childhood friend of Bruce Wayne (also known as Batman—wait, what?—due to the events of a retconned past). She also discusses the opportunity to have a deeper relationship with Bruce Wayne, which is given the kibosh due to Wayne’s commitment to justice. It is later revealed that Bruce Wayne keeps a file on Zatanna alone with with former romantic relationships on a Batcomputer.

Zatanna is a power sorceress. She is able to chant and recite spells backwards. In addition to her genetic powers, Zatanna is also a trained illusionist, a showgirl, and a stage magician that can use magical powers.

There needs to be more raven-haired vixens with magic powers showcased in DC Comics.

Wow!!!! @hushicho, I love the additional information and comic suggestions!!! 😃 Thank you! I will definitely look up “Everyday Magic”.

Incidentally, she also has a cousin (nephew?) Zachary Zatara, who is written even less consistently than Zatanna is, though he can be fun sometimes. He appeared in her solo series a couple of times, though only the first time is really anything worth seeing.

Zatanna is a lot of fun. Being a fan of hers when the Justice League Heroes game came out put me at an advantage, since she was the most powerful character in that game and a lot of people didn't use her because they didn't know who she was. Their mistake! Zatanna has been written extremely unevenly over the years. If you want to read the character written at her best, read Zatanna: Everyday Magic. That's also incidentally John Constantine's best writing to date.

She would make a better magic type show on the CW than what they have on now. She is almost the equivalate to ScarletWitch. BUT Zatanna would have the upper hand with all her experience with Dr. Fate and Spectre. Her powers are limited; up to her imagination like the Lanterns Corp users.

Always a fun character. The Justice League Unlimited episode with Wonder Woman turned into a pig is a classic; 'This Littler Piggy'. It has Batman singing a torch song.