The dance of chemistry

When it comes to characters and their arcs, their relationships, or more specifically, their chemistry, has a large role to play in how they develop. From day to day we absorb and reflect the behaviours, views and values of those we interact with, be that at work or school or our friends and family. So it stands to reason these dynamics flow on through our narratives.

I was listening to videos in between my work and happened upon a video exploring the chemistry between Belle and the Beast in the animated Disney film in comparison to that of the live action remake. I’ll be going into some points the video covers but it is well worth a watch. (Click here) The video explores the concept of character chemistry being like a dance. There is a push and pull to their dynamic, regardless of the nature of their relationship, that makes it compelling to watch.

The key scene in the Disney animation that she dissects is the one where Belle is tending the wounds the Beast sustained whilst saving her from wolves after she escaped. 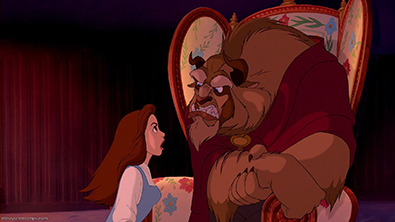 She says. “This argument scene, where the beast blames her for running away and she snaps right back at him, is a flawless example of it. Now on a macro level this scene happens right
after the one where he saves her from the wolves leading her to have a moment of genuine regret, concern and gratitude for him, which then results in her bringing him back to the castle where she can tend to his wounds.

“By the end of the scene, the mood between them will shift, and they'll both start to see each other as unlikely friends. There's the flow in their relationship from a broader perspective,”

This notion of push and pull, a dance if you will, is demonstrated in the manner in which, with each point either Belle or the Beast makes, one will lean forward, visually pushing their point across, whilst the other will pull back before launching forward themselves. When Belle makes a point that the Beast cannot argue against, she uses that moment to display gratitude, thanking him for coming to her aid. In this moment, we see the Beast’s mood change. He softens, as she did, and accepts her thanks. The scene concludes with the conflict having been resolved and the characters taking a step forward towards understanding each other.

The video goes on to explain how this scene falls apart completely in the live action remake as well as further examples of how well the animated film, both from a writing and visual standpoint, demonstrated strong character chemistry and the mistakes the live action version made. I highly recommend watching it.

This dance analogy extends beyond love interests. It encompasses friends, enemies, rivals and more. Conflict between characters makes for interesting dynamics, even more so if they come to understand more about each other and how they interpret the world around them.

What makes for good character chemistry for you? Let us know in the comment section below! And join us on Sunday evening for our Quackchat at 5:30PM(EST)!

Chemistry is very important. It's crucial in things where we're supposed to see the characters as friends or even lovers, and even though there is endless variety to relationships people can have...it's got to have that chemistry, or else it requires far too much invention on the part of the viewer or reader. Disney heavily censored their stuff (largely to pander to the Chinese market they thought would support them), even completely undermining Gaston's identity and no longer indicting the idiot peasants who jumped on the bandwagon of an unscrupulous leader, and were about to murder innocent people. It's sad when Disney in the 90s is way more hardcore than Disney now, with its impotent, bland retreads of things they themselves did better previously. It's the prime example of a needless remake, and one thing they all get wrong is that chemistry.

Listen to Carl Maria Von Weber's Invitation to the Dance. That's from 1819. This is a very old idea. Some of us have even experienced it first hand. Somehow when seeing a critic is a video dissect these things almost seem like they know nothing about and most certainly never actually living it as opposed to just seeing it in fiction.