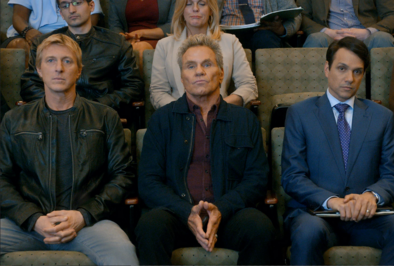 Over the past couple weeks I watched and loved Cobra Kai. There are multiple articles that I could write about this show.

It's an ensemble cast, and I guess Johnny and Daniel could be called co-Protagonists. I actually think Johnny is the Protagonist, Daniel the Antagonist and Kreese is the Villain.

Well, a good Protagonist has

1. a flaw, or wound - a NEED to get over it/grow up,
2. something they WANT, an
3. an OBSTACLE in the way of getting what they want, and
4.some ability or SKILL that makes them stand out.

A good Antagonist - has all the same things.

The thing with them is - their WANT (or possibly their NEED) is at cross-purposes with the Protagonist's. They can't both have that thing.
EG, they can't both win the trophy. Or they can't both be with the love interest. (or both, as in the original Karate Kid movie).

The good VILLAIN also has those elements to them too.

But their Want, if they get it, will DESTROY the Protagonist.

So there is an interesting dynamic in some stories - The Protagonist/Antagonist/Villain triangle.

This can also be seen as a White Hat/Grey Hat/Black Hat dynamic.

In No Country for Old Men, it's Moss (Josh Brolin), Sheriff Bell (Tommy Lee Jones) and Anton Chigurh.
In the Fugitive, it's Kimble (Harrison Ford), Gerard (T.L. Jones), and the One-Armed Man (and his Boss).
And in Cobra Kai, we have, Johnny, Daniel and Kreese

You could reverse Johnny and Daniel, since Johnny's more of an anti hero. It's debatable - and a lot of what's interesting about the show is the nuances of the characters sometimes being in the right and sometimes in the wrong. This is bit of a different discussion, since Protagonist/Antagonist is not always the same thing as right and wrong or good and bad.

Have you seen this Protagonist/Antagonist/Villain dynamic in any other stories?

COBRA KAI!! Love this show. I even have a mohawk ;)

Lol. It's somewhat a side-plot. He's killing off his remaining brothers while they look for this gem. He doesn't even know where it is. And the protagonists don't know what it is. It's 100% dramatic irony. (Can't believe you don't remember Septimus. XD He has a swordfight with Tristan in the climax -- while his ghost watches.)

Aha! I remember the movie somewhat, but I have no recollection of Septimus. sounds like a well-mannered Antagonist if he keeps his goals away from the Protagonist like that!

Stardust is my favorite movie and does this very well. Antagonist Septimus wants the gem that will make him king. The villain witches want to kill the heroine to extend their lives. Septimus is super evil and kills tons of people on his quest. If he got the gem, however, he would stop. But the protagonists don't know about him or his goals whatsoever. (So he is quite villainous, but technically his goals are not in conflict with the protagonist goals...)