Cartooning With Banes - Focal Points, Characters and some such stuff like that 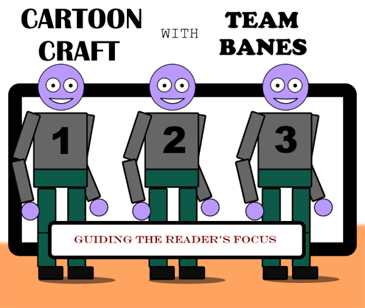 An advantage of comics as a medium is to be able to use still images to tell the story, and create an impression or feeling in the reader that runs deeper than words can do. Or at least, the images can strengthen the experience and make something people hopefully get more from reading, and hopefully want to read more of your stuff. The images can tell more of the story than the words alone can do.

As an example, let's say we want to focus on a particular character in a group, but we don't want to use words/text. How could that be done?


1. Blatantly make the focal character bigger, or use darker lines, or have other characters out-of-focus. So, literally forcing focus on the desired character! 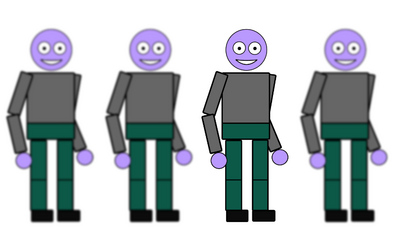 2. Place the focal character in a ‘strong’ place in the panel: dead center, or at the one-third point or two-thirds point. Backgrounds or other elements in the scene can emphasize things even more. 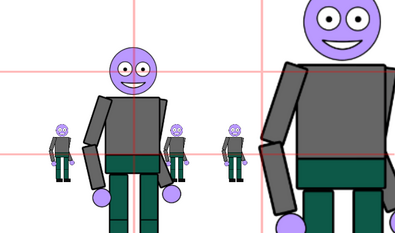 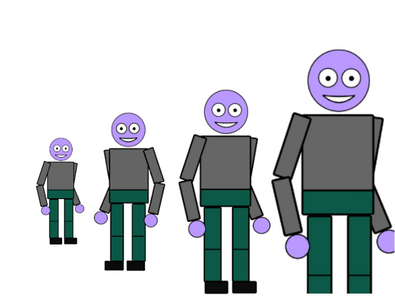 The power of how and where we place our characters is a way to show who the reader should be paying attention to, relating to, or watching in a particular scene or story. It's also efficient - strong impressions can be created without using a single piece of text!

There are surely other ways to guide focus to a particular character or other focal point. Do you use any?

I'm far from an expert on visual art and I wasn't sure how to title this topic once I was through with it.
I also noticed after the fact that the “focus” character in my examples also used the ‘rule of thirds’ concept. A lot of this is done by instinct I s'pose.

This is excellent advice, and I'm so excited about the article series! You can also look up Wally Wood's "22 Panels That Always Work" because that's a superb and very concise reference to easily constructing a panel that keeps the audience engaged. The Ben Day he refers to is what we usually call screentone now. I also recommend the original How To Draw Comics The Marvel Way, by Stan Lee and John Buscema, as it has some great information on this topic and many others, and you can probably find it very inexpensively now.

Excellent advice! Also having the character a different colour- you can make the other ones grey and the main on coloured... Or maybe not just darker lines but thicker ones around the focus character?

@MOrgan - Now THAT would get the job done!

I use naked titties to guide the reader's eye. It's surprisingly effective. ;-)