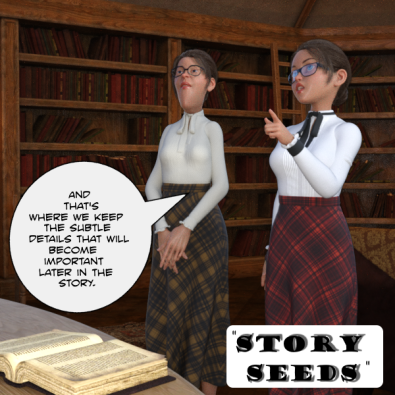 In the early parts of the story, it helps the quality of the thing and the experience of the audience to layer in the details that will come into play later.

These are little character and world details that will come into play later - the sword that falls off the wall whenever the front door is closed is seen earlier, and goes by as a charming detail about the family and their somewhat chaotic lifestyle. Later, that sword will be used to kill a bloodthirsty Gremlin.

When the Mandalorian breaks into a prison-ship as part of a jailbreak, we see a prisoner reaching through the small gaps in his cell door. This is important to show, and even emphasize, so later when Mando is locked up himself, he is able to use those little gaps (and his expertise and technology) to get himself out of it.

Not EVERYTHING needs to be set up and forecasted. But some things definitely do. Even if it's subtly, in the background. This helps events later in the story make more sense, and not seem like they come out of nowhere.

I hope this makes sense - honestly, examples are many and I notice them all the time. Maybe one thing that makes payoffs and climaxes ring false could be the lack of “story seeds” laid in earlier that helps us understand the world and various details and contexts about it.

It's about showing how the specifics of your world and story operate, so it'll be cohesive and coherent. The audience is much more able to feel what you want them to feel and take the ride you want them to take when they understand what's going on.

When you look at your payoffs, big moments or climactic moments in your stories, it might be worthwhile to go back and add in the seeds that help set it up. The specifics are endlessly diverse of course, depending on your story and its world.

As Paul said. I often find "fluff"—stuff that I put in just as interesting detail—becoming something I want to come back and use later. I'm also guilty of foreshadowing things I never get around to developing. AND I've foreshadowed things that I totally bring back later… and nobody catches it.

That's why I love drawing a clutter of useless detail in every panel - some of it might come in handy years from now. ;)

Deus ex machina: the author has written themselves into a corner and need a way forward. Oh yeah, let's just have divine intervention! *poof* heroes are successful! As opposed to setting up the alternative before and making it always a possibility like Banes says. Story seeds are a thing. They're usually a one sentence possibility that can be used to grow a story. Could be something like "Stalin and dragons" or the famous "what if..."

@Corruption: And those convenient solutions that suddenly appear without prior mention are Deus ex machina. They always feel cheap and contrived.

@MOrgan: And some of the butts! The details you think may come into play latter, but don't are called "Red Herrings" (Are they communistic or something?) If you do not establish something is possible, you get problems latter. For example, in the first Harry Potter book the Floo was not mentioned, nor Apperating or Portkeys. Dumbledor used a broom to get to the ministary. Considering those transport methods I mentioned latter, alot of fan fictions use that to indicate the was aware of what was happening, and leaving tolet things play out. In Lord of the Rings, the second book has the Mountain men (Ghosts) who destroy the fleet and allow the heroes to pass through their lands, while others dare not go there. As far as I know they were only introduced in that book, and for the sole reason of doing those things. Feels pretty forced to me.

It's called "foreshadowing". ;-) Not that my readers seem to pay attention to when I sneak those things in. I think they're too busy looking at the boobies. ;-)