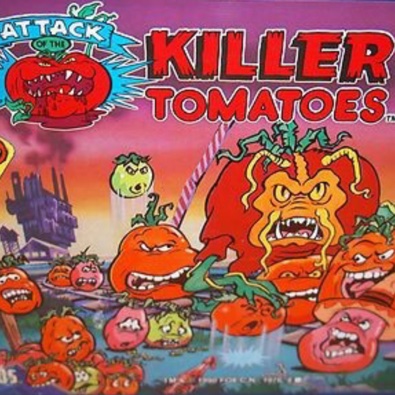 A click of the remote would tune into mutant turtles riding a pizza shooter while commercials for Nickelodeon Gak and Floam consumed the screen. It was a real zany time to grow up in the early nineties thanks to the creative minds that made television and toys more fun.

A hidden gem that deserved a larger fan base was the B-Movie turned television series, Attack of the Killer Tomatoes, based on the 1978 film of the same title. In this show, a city was being overrun by angry tomatoes that would splat themselves against buildings (similar to the way tomatoes were thrown at Shakespearean theaters); a cute little tomato befriended the humans (like Gizmo in Gremlins); and a nineties girl name Tara could transform into a tomato if given a bit of salt. Yes, Attack of the Killer Tomatoes made perfect sense at the time of its release and was a show that would elicit non-stop laughter at the sight gags and plot points.

The following year, the Teenage Mutant Ninja Turtles II: The Secret of the Ooze was released as a sequel that dove deeper into the radioactive sludge that was crucial to the turtles’ origin story.

The question I am posing for early nineties cartoons is: What was the reason behind so many shows based around radioactive neon green waste in glass capsules?

Could it be related to the increased popularity of nuclear reactors built in the 1960s? A deep concern for the Chernobyl disaster in 1986? Pollution and waste management getting out of control in the late eighties?

Captain Planet will take care of the rest.

@bravo1102–I started streaming “The Toxic Avenger” (1984) and it is filled with eighties goodness including fitness workout obsessions, great 80s hairstyles, and bullies!

I wonder where the radioactive green ooze trope even comes from...? Radioactive waste doesn't glow green and isn't normally in the form of slimy ooze... Uranium glass is yellow-green and can glow but ONLY under UV light. There's glow sticks that are easy to use for theatrical productions and fancy but aren't radioactive. There's Radium, Tritium, and Promethium that were specifically used for glow in the dark applications, but they aren't waste in that form and are all actually pretty rare and only used in small amounts XD - Oh Radium might be more common but it isn't used because it's dangerous

Love Canal and the Superfund sites in the news. I live in the state with the largest number of toxic sites. Also Ciba-gigy and various petrochemical plants that they're still cleaning up. Most of this stuff goes back to the 1950s not the 1970s. Environmental awareness starts in the 1960s and gets big in the 1970s when I was in grade school and any number of Environmental disaster movies like Prophecy and Soylent Green. The 1990s was pushback for Environmental regulation after the neglect of the Reagan years.

A lot of it is run off of the 80's* industrialization and the long results of the 60's/70's urban hazard disposal and corporate waste. You can see this in movies like 1979's Prophecy. It is just used as the "magic dust" to explain away reality because it was long in the zeitgeist of the time. *(Pun not intended but I'll take it)

You forgot New Jersey's own superhero born of radioactive toxic waste. The Toxic Avenger who though a character in a very "R" rated franchise had a cartoon show too. The 1990s with radioactivity was like the giant monster movies of the 1950s. Atom bomb goes off and there's ants or locusts or giant lizards.

As for radioactive '90s properties, Spider-Man had a cartoon show & some movies and he got his power from a radioactive spider bite. The radioactive ooze from the TMNT origin was also a nod to Daredevil's 1960s origin story where he's hit by a radioactive container. The Turtles had a few Daredevil parody elements.

While it has the name of the 1978 film the cartoon show had several characters from the 1988 sequel Return of The Killer Tomatoes. I believe Tara and John Astin's mad scientist came from that film.