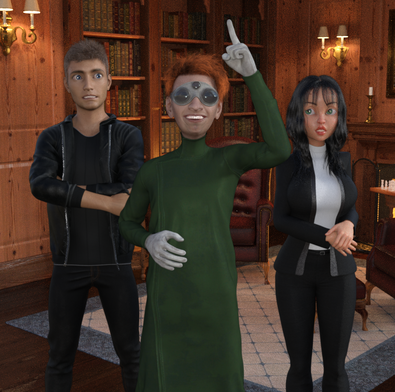 Reverse-Engineering Conflict in a Story
part one

Conflict is the basic material of a scene, and of a story. I've talked a lot over the years about structure and genre, and how all that stuff can work.

Another way to create a new story, and new characters, is to reverse-engineer the basic building blocks of story. Starting here is a way to establish specific characters and their ultimate conflict which we can then flesh out into a story.

It goes like this - we create a new character, not by deciding where they work, what they look like, or even what gender they are.

We begin with what they want the most, and why.

It could be to marry their boss, to buy a boat, to join the Galactic Navy Marching Band, or whatever.
The important thing here is that this want is something the character would give up almost anything
to have. It's not a casual want; it's deeply important. Decide WHY they want this thing.

After establishing what your character wants, that they're give up almost anything for, you ask
'What would they NOT give up to get that thing?"


Do you see the conflict that is created once these questions are answered?

The climax of this story - or one of the big moments at least - would be when the thing that they won't give up seems like the only thing they can give up to get what they want.

We don't know what genre of story this is, or what kind of plot stuff happens. That'll have to be figured out…but it can be done later.

And just by answering these questions, you set up an obvious conflict for your character, and a strong beginning to building a story.

How do you create conflict in your stories?

Anyway, that's all I have for now!

Building a story from the characters you dream up works great, because that way it can evolve organically. The crucial thing here is finding a good combination of characters to bring together and probably not introducing too many or too few at once. My personal close second to this is starting from a funny/awkward/exciting/crazy situation and then figuring out a cast, setting and context to bring it about. This way, too, obviously leads to the same basic question what the characters want most and why, so as an approach for laying the groundwork it's not actually that different.