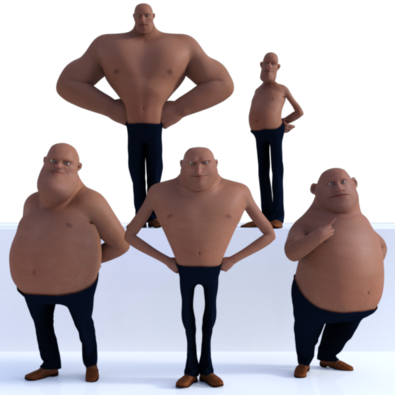 When we think of a Protagonist, the standard type that comes to mind is the underdog, maybe a young character who goes on a difficult journey and learns some lessons and faces many challenges, or a capable person who gets in way over their head in some kind of intriguing trouble and has to struggle their way out of it.

Certain kinds of stories or series, no matter what the medium, are suited to the lone Protagonist. A detective, or a wandering barbarian, or innocent fugitive, or martial artist, or husky dog.

Other times, it's preferable to have a duo to talk to each other, disagree, and tackle their problems from their unique points of view, with skills that complement each other. Even larger ensembles increase the possibilities into endless variations of relationships, and have advantages including the possibility of some of the heroes dying, creating suspense and tension.

But it can get different than this - it's possible for a series (of books or comics or TV shows or whatever) to have the WORLD be the Protagonist or main character. This is where the environment itself is the recurring element between chapters, or books, but the characters can come and go freely. You might see a character/group focused on heavily for one story, and whether they die or not, they can just go out of focus, never to be seen again even though the series continues. It's the larger environment that is the main character.

I believe Discworld is one of these types, though I haven't read it. Thieves' World as well. I guess having the word “world” as part of the title is sometimes a giveaway. We've got them here on The Duck as well, with Genejoke's BASO and El Cid's Transneptunian.

Finallly, the Anthology-type series is completely different stories with completely different characters who are seen once and never again. In this case, it can be the THEME that is the main character. So it has no recurring characters or even a recurring environment, necessarily, but it's about the Military. Or it's Horror stories. Or supernatural stories with a twist or a moral. Love, Death and Robots is an example of a theme-as-main character series on Netflix.

So that's what I was pondering today anyway.

I've always been fond of ensembles and then duos. Single protagonists almost always end up with some level of Mary Sue, "chosen one," or "lone wolf" vibes, which are eye-rollingly unbearable to me. The only "single protagonist" stories I enjoy are quirky detectives in a whodunnit, and even then, they are better with a partner to play off of. They also tend to slip into the background of their stories, since the main players driving the plot are the suspects.

I'm definitely using the theme as a protagonist for Imsies: the Imthology, as well as for Bloodiator, which will have its launch later this summer. There's something satisfyingly dynamic about having an anthology type of series where the theme encompasses any character/story you can think of with any relation to that theme. The Imsies don't even have to always be the leading protagonists in each and every story in their series, they just have to be involved in it somehow and they come in so many different forms, applicable to any kind of enviroment or element, that there's next to no way you can't have them be involved. So you get all these different perspectives, elements and dimensions that are only as limited as your imagination. One of the authors that I know so far that utilizes this dynamic the most and the best in his works is Thomas Ligotti, with Songs of a Dead Dreamer and Grimscribe, my favourite horror anthologies of all time.

Another interesting protagonist could be the "wannabe villain" type, like Iznogoud or Wile E. Coyote, or tragic / tragicomical protagonists in general. They're usually driven by some almost psychotic obsession that's always doomed to fail ("I want to be the caliph in place of the caliph!") paired with a complete lack of self-reflection, so at the outset they might not be really relatable to most of us (hopefully). However these intense painful funny moments when they're forced to face their own inadequacies somehow manage to change that. For a very brief span of time, it makes them become as human as any character could possibly get.

@Oz: totally agreed. My guess is the great late Sir Terry tried to add more depth and detail where it wasn't really needed, which made the later novels become like all the stuff he used to lampoon in his earlier days. I guess that's the difficulty of having a world as the main protagonist: you keep adding and adding to it, you probably even have to, and there's no way to go back to simpler times. Cerebus the aardvark might be another point in case. I read only tiny fractions of it, though, from various periods - in that series even a couple of hundred pages more would still only be a small fraction.

Discworld sort of was, yes. Especially in the early days when Terry was doing mainly one-offs, before he started mainly doing series based around certain groups of characters. I loved those early books the best. Back then the Discworld was wild and untamed, anything could happen. We as the reader were exploring it at the same time as the characters and the author too! In the later stories the world had crystalised and shrunk, it wasn't nearly as interesting: basically just a fantasy version of late 19th century London with the rest of the wolrd tacked on as needed, VS the original which was completely amorphous, very dangerous, sexy, strange and unformed. A lot like the way Xanth changed actually!