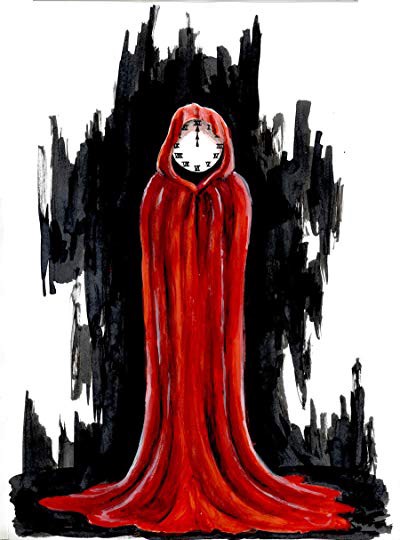 Protagonists are always in need of antagonists.

Usually, those are visible, concrete, specific: the protagonists are up against someone or someones who are obstructing their way to attaining their goal. Some are even so powerfully clashing against each other that they are nemeses. Superman and Lex Luthor, Batman and the Joker, the North and the South, the Allies and the Axis, in fiction and in life it's a pattern that is always recurring.

When having a clear antagonist, the suspense lies in their tug of war, their game of wits, the back and forth within the story.

But what if the enemy is unseen?

I don't mean that there's an invisible individual that is an enemy or antagonist, though that too can be pretty interesting as a story.

I'm talking about an unseen enemy that has nothing to do with individuals. It is not sentient in the way we expect individuals to be. It is not ethical or unethical. It is not caring or uncaring. It operates on ones and zeros: either it gets you or it doesn't, and it doesn't care either way.

The Unseen Enemy is a force of nature, a plague, a war, a climate change, a shift in the status quo that simply is blind to the impact it will have to the characters in its path.

What kind of suspense can be built against an unseen enemy that is invincible?

How does everyone act when it's the end of days, when death knocks on your door, when there is nothing to look forward to but desperation?

Such a situation is an amazing opportunity for exploring personalities. For seeing how people evolve and how they deal with terrible stakes.

How does one survive Armageddon, whichever version that may be? How does one deal with it?

Will you shut yourself in your grand castle and party until inadvertedly Armageddon overtakes you?

Or will you try to avert it, or salvage what can be salvaged in its wake?

The Unseen Enemy, when outside, is terrible but gives an opportunity for people to come together- or disperse, and suffer the consequences.

But the Unseen Enemy can be inside. It can be a vice, a want, something that eats away at a main character like a horrible worm. And that kind of Armageddon can devastate at a smaller scale but no less terrible: in a family, in a school, in a community.

Suspense is built when people react and handle the Unseen Enemy. It can be large scale, it can be small scale.

But somehow, the Unseen Enemy is always the same vast, terrifying threat, and the fear burns the same.

Have you got an Unseen Enemy in your story or webcomic? How are you handling it, if so?

Sort of the essence of cosmic horror. Koji Suzuki's "Edge" is a good example of a cosmic shift bringing an existential change to reality that we can only observe as it races toward us. (And I was entertained by the simple concept of this looming doomsday being first hinted at by a sudden change in the value of Pi.) These sorts of unseen cosmic horrors are really cool plot (and thought) points.

Could be something as simple as yourself. That existential crisis, or mental illness. It's unseen, it's inexorable but it can be overcome. Again great Twilight Zone episodes about this. Often the fear is personified as a monster or death or a voice on the telephone or just the Nervous Man in a Four Dollar Room. It's himself the whole time.

This is my favourite type of antagonist, ever. An unfathomable opponent plays with our primal fears of the unknown, and, as a reader, you automatically insert all kinds of scary details. You'll never convey that level of helplessness against an overwhelming enemy with antagonists you know well, especially because you could never keep them as inhuman as you might like. The tricky part is the final reveal before this enemy is vanquished, because when the reader fills in so many of the details that then turn out differently, these final reveals are prone to create disappointment (the robot planet episode in Stanisław Lem's Star Diaries nicely subverts this by toying with this problem head-on). I've never really tackled this kind of antagonist so far, myself, but it's high on my bucket list of things I want to have a shot at.

There is also a class element to the Mutant Scare. Not just in terms of having the money and the right connections to afford the proper bio-therapy to keep mutation within you and your family under control, but you also get these so called Morph-classes from it. These are demographics that the different mutations have formed out of the population, that recieves differing access in society accordingly to their form and extent of mutation. So far there's seven Morph-classes: Norms (Normal), Quasi (Starting to diverge from normal), Noid (Clear biological disruptions), Anthrope (Half-human), Zoid (Non-human), Biomorph (Bio-engineered automaton) and Morphless (Featureless abomination, the hobos and lepers of this world). There's a heavy moral dilemma going on how to tackle this development. Is it Morphicism (prejudice towards a certain morph class) to keep the Morphless out of shops and cafés, or is it simple self-presarvation, not wanting these positively radioactive carriers in your shop.

Well, for Molly Lusc for example there is the Mutant Scare. The Mutant Scare is a worldwide condition caused by this orbital flux instigated by the Chernobyl nuclear crisis. It is a condition where radioactive pollutants are being perpetually formed, contaminating the elements and causing various mutations in a rapid manner. It is without an end and is next to untenable, causing humans and their biology everywhere to morph in various ways, from their birth and/or throughout their lives. Humanity as we know it is basically on the verge of disappearing due to this neverending disruption of DNA that is consuming the global enviroment on an alarming rate. This is something that neither the protagonist Molly or anyone else really can do anything about, its simply just the way things are and they are all forced to deal with it the best they can, using the advanced Bio-therapy of the times to stem the tide, if they can afford it that is

When I saw the title, I immediatly thought of the hidden foes. The ones that work behind the scenes and the hero does notknow about them until latter. . . . or maybe the hero just imagines there is such a foe and goes paranoid looking for potential hidden agents ofthis foe? (This couldwork for a story) For this article's type of enemy, one type I have seen in real life quite often to a much lesser extent is when someone is afraid and tries to take control. The fear maybe of loneliness, abandonment, failure or something else, but they seek to keep control of things, and being overly worried, refusing to let others help (as that would mean giving up some control) driving others away, and being overworked destroys them to a greater or lesser extent.

Many of the stories in my comic don't have a human Antagonist, really, so they're battles against the heroes' own foibles I guess. When it works it's not even noticeable - some big movies I've loved are the "race against time" or "struggle against yourself" sort of conflicts, without a main Antagonist - like Star Trek 4, The 40 Year Old Virgin, or Back to the Future where Biff is a bully and an obstacle, but the true Antagonist is the race against time. Same in BTTF 3. In BTTF 2, Biff actually functions as the main Antagonist.

I've never been a fan of stories where something intangible is the main antagonist. They are too real for me and too frustrating. I like a human foe most. It's my preferred fiction, maybe because it is simple, easy to understand, and has no correlation to my own real experience. Intangible conflict is fine for a complication, though, and I use it in my story. Weather events, fires, physical or mental weaknesses, addictions, etc. The internal ones seem more like personality traits than enemies, but they can be "defeated" (or maybe even "allied with").