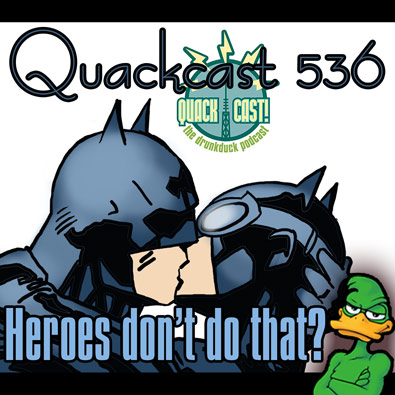 There was ALL sorts of kerfuffle on the internet centred around the phrase “Heroes don't do that”.
It began with an interview of two people involved in the production of the Harley Quinn TV animated series. According to them there was a sex scene between Batman and Cat Woman, including a scene of cunnalingus. They claim that a representative from DC told them to cut that scene, saying “Heroes don't do that”.

The nerd-net exploded over that! It's super important to realise that it is NOT a direct quite from DC comics though, it's a 3rd hand paraphrased remark: originally second hand and paraphrased by the two interviewees, then delivered 3rd hand to us by the news blog that published it. Hence it CAN NOT be said to represent the editorial policy and exact words of DC.

Further, we don't know if the intent was “Heroes don't perform cunnalingus” or “We don't want to show our heroes performing oral sex on screen”. Most of the nerd-net automatically assumed the former, perhaps because people tend to think overly literally, or they like to go for the funnier, stupider, more bombastic interpretations. The latter seems the far more logical and obvious version to me though. It's silly to think there would be certain super common sex acts that DC would forbid their heroes participating in off screen.

With that in mind we're thinking about the idea of the “image” of characters, including our own: What WOULD they do onscreen and what would they NOT be shown doing?
#heroesdon'tdothat
#heroesDodothat

This week Gunwallace has given us the theme to SweetGum - Hot summers day in the shade, looking out over the wide expanse of a fresh green sunlit valley where you can see to the limit of your dreams. Far mountains dissolve into the sky and the world goes on forever.

@rickrudge- yeah, I saw that... I wanted that for the main image for the cast but realised it would be realy problematic, haha! So I did my own version of this comic image instead.

@cdmalcolm1 i LOVE Onepunchman's aproach! It's lovely :D I think a lot of US comics take sidelines into that sort of area, but precious few of the movies and animations... Though Onepunchman is a comedy so it's more likley to be different.

I know that this big hoopla is all about promotions and selling movies, comic books, action figures, and other Batman memorabilia. I guess that this is more interesting and fun than other news on the Internet. To think that the dark knight could be so vanilla. So much for an action figure having a kung fu grip. Well, that’s enough jokes from me. I did see a graphic posting supposedly by Zack Snyder or was it really Frank Miller?

I hate that saying, “Woke”. It makes ppl sound stupid as if they took the English language and puked. I hate media for spreading that dumb content by misusing English in that way. Sorry I digress. Sex is one thing and a bit touchy for the simple fact that the context is still kind of meant for kids. A fantasy in which even our inner child can relate in some way. The thing is we grew up together. So putting adult things into something that we read or watched as children we kind like seeing it grows with us, and not be trapped in time like the Simpsons. There are a few things supers don’t do. House cleaning. Shopping for groceries, (Although One Punch is always looking for deals at the supermarket. ) Sure some heroes are rich but not all. Villains as well. I think the more the heroes and villains do more “normal” things, we will feel some kind of attachment. Sex is no different.

@Easybee Interesting! So the context and the intent was pretty much the absolute opposite of how the nerd-net and all the woke commentators have been talking about it? HA!

The quote was also taken out of context. The showrunners were talking about how much latitude they had with the characters, and this was a single case where DC drew a line. It was meant to be complimentary to how open DC was to a general irreverence with its IPs on the show. Still, the memes are hilarious, and the whole, "So, superheroes are selfish lovers?" question cracked me up.

Maybe they thought only villains would be cunning? Take that, internet.

My heroes certainly did...and more! I suppose if it's relevant there's no issue with Supes or Bats or whoever going at it. I guess it's just never come up and might be a bit jarring for characters that gave been around for the better part of a century. I guess DC can always try more adult stuff, after all, they have the most easy 'get out' with their multiverse stuff. It's an easy way to write off things they didn't feel worked out.

@Helix- I can see Spiderman doing that. Though I don't think anyone would appreciate it. It's the kind of thing out of touch comic writers try and include to desperately stay cool and relevant. i.e. "Hello my fellow kids!"

That's true GW. Batman never strains over the loo to produce something braown and smelly... thank goodness. We never see it so he doesn't do it haha!

They don't do social media. Or do they? It's unlikely, but also kind of hilarous, to imagine Batman snapping a picture of tying up some crooks, posting it on his Facebook feed with the following comment "Because I'm BATMAN!"XD

They never go to the toilet either.