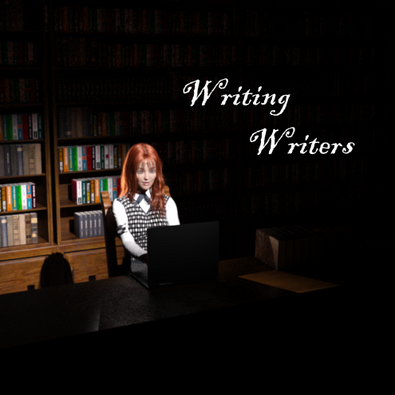 I read some writing…advice? Or commentary? Or something like that years ago that pointed out how often amateur writers will create Protagonists who are writers. If I'm remembering correctly, this was expressed as a bad thing, probably because it's overdone. On the one hand, they say write what you know, but on the other, I think this kind of thing can come across as lame, cliche, or a Stephen King ripoff.

For my part, I don't take a firm stance on this one. Having a writer Protagonist is an easy default when thinking up a story, so that's something I try to be aware of - and I don't think I've written many or any stories starring writers – but sometimes it's the right move. It all depends.

In any event, I was thinking about some of my favorite stories starring writers…in no particular order, then…

MISERY -
Once a very well known classic, this might not have the mainstream awareness these days. Which is great - definitely give it a read or a watch! The book is very good; the movie starring James Caan and Kathy Bates might be better. A Stephen King story that features not just a writer, but a celebrity writer, something obviously in King's wheelhouse. A grim little story more about the dark side of celebrity than being a writer - but there's a lot of writing being done in this tale. For a unique, unsettling story, check out this cockadoody movie!

THROW MOMMA FROM THE TRAIN -
The night was moist. Not a strong beginning. A dark comedy directed by Danny Devito, this one is a hidden gem. Always was under the radar, but is almost completely unknown these days. Which is again, a great thing for a viewer to be able to experience. A blocked writer who teaches a fiction class at a community college gets mixed up in a Hitchcockian murder scheme. My favorite Billy Crystal performance, along with the legend Danny Devito and Ann Ramsey as Momma. Full of quotable lines and dark hilarity.

ADAPTATION -
One of my all-time favorite films. The story of a screenwriter, struggling to adapt a novel about orchids. Also the story of the novelist herself, and the eccentric redneck who's the subject of her novel. This one again runs to the dark side, but the performances, unusual plot and multiple povs, and some of the greatest meta fiction moments ever (“God help you if you use voiceover narration in your movie!”) make this something special.

Many books and films have featured writer main characters - some barely touch on the writing part, and the hero just says they're a writer and is neurotic. It can help have a Protagonist who's not stuck in a regular job, and once again, writing what you know. I can't think of any that feature a real workaday writer or screenwriter who's good at getting it done, that way actual successful writers do it. Jack Nicholson's character in As Good As It Gets is one, as is James Caan in Misery, mentioned above.

And since we're webcomic creators here, it would be nice to make a list of webcomics about webcomic creators - but I don't know any. I'm sure there are tons of them, though! As for great movies with comic book creators in the lead - I don't think there are enough. I could count the ones I know on one hand - Chasing Amy, American Splendor, Cool World… all worthy. But there ARE no other that come to mind, so I can't do a “best of” list. No way am I going to do a Newspost discussing Monkeybone! xD

Do you like or dislike writers as lead characters? Ever written one? What are your faves and least-faves?

One franchise about writing and writers that I find outright epic is a point & click game series with an incomplete book series based off of it (I haven't played the games, but I have read the books) called Myst. A science fantasy setting where writing is the magical gateway to distant eons. It's a story about the power of creativity, the responsibilty of creativity and the destruction that such power without the understanding and responsibility to use it leads to.

Works about theater (stage, movies or radio) usually have a writer character in the cast. Backstage whodunit often have the playwright or screenwriter in the ensemble and there was this great show on AMC called "Remember Wenn" about live radio drama back before WW2. There are two writers in the Belle's Best ensemble and both suffer for their craft and in a lot of ways it is similar to acting. When writing you could say the writer is performing all the roles as they put them down on paper, whereas an actor just does one but then "All the world is a stage " everyone is a player so it can get very meta.

@usedbooks - I agree that writing seems more relatable. But I do it sometimes too, so that could be why. Haha...I guess for comic-artist, actor, and comedian heroes it definitely depends on the story. Those things all seem more unusual than a writer character somehow, and would require some kind of reason or special attention in the story, especially if the story is not about "making it" or struggling with those specific careers. I appreciate shows about musicians when they're good, maybe because I play some instruments. But that also means those stories can ring false for me very easily if they're not based somewhat in reality!

Romancing the Stone is a classic and a personal favorite. I also like Stranger than Fiction, which isn't STARRING a writer, but it is about writing.

Writer characters are okay in film and stories. Readers/viewers can relate to the writing process, although since I enjoy writing, maybe I have a bias. I am currently binge watching Murder She Wrote. But I cannot stand shows/films set in the world of film where the characters are actors. I find it utterly unrelatable. And comics starring comic artists are a bit eye-rolling (sorry, Garfield, not an exception). It hits like stand-up comedians whose acts are about being stand-up comics and performing. :P

@damehelsing - I agree - it doesn't bother me either; I don't think it's as overused as it might have been in the past. I like the idea of the writing actually being important to the story itself, as you talk about. Adaptation and Deconstructing Harry use that kind of thing to good effect too.

@hushicho - Oh, yeah, I've heard of that series but never seen it. Cool! yeah, writing is an occupation that can be handy for a character to have flexible hours and time to get into whatever shenanigans are required. It's also used for exploring neurotic-type characters. Maybe it's not overused that way as much as it used to be.

There is actually a webcomic that I used to read called Sunstone(there are now sequels/prequels of it) - it's for adults, but the lead is a writer, and honestly... it doesn't bother me one bit. I think as long as the characters are done well and the plot is great, why would a profession even matter?? In this case, the story of Sunstone, it is the lead character actually writing out the story we are reading, so the profession there does make sense and I think it was a great story. I can't recall many stories where the profession had an impact unless it was all about the profession and something leading back to it.

Incidentally, sorry for not mentioning what the show was in my comment, but it slipped my mind. Flora Collins is in the last main storyline of Dark Shadows.

One of my favorite writers in fiction is Flora Collins, on the last main storyline in the show. She's a writer, and there's discussion from time to time about her novels and her writing, but mostly it's about who she is and what she does along with writing. Sometimes it's just best to have it, if it is treated as a profession and not a hobby, as something that allows the character a great deal of agency and flexibility that having them in a day job does not. It's much the same with artist characters. It's rarely glamorous enough to be their main focus in the story.