Punch to the Midsection 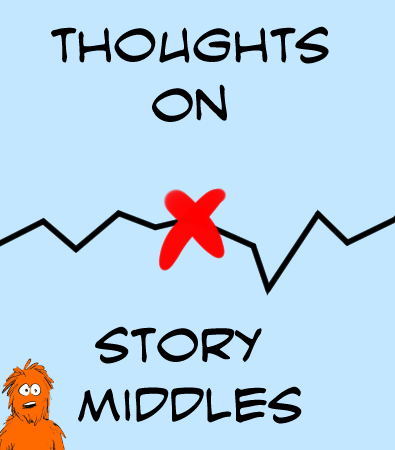 In the beginning, we set up our character
Iin the middle, we get them into trouble
In the end, we get them out of trouble.

Sounds so simple! It's tougher than that to pull off.

The middle of a story in particular, as people have talked about, is often the most difficult to write. Writers usually have
some idea how their tale will begin and end. But most middles are murky at first. It's also usually the longest part.

Emma Clare had a helpful article with how to get the middle going:

Having specific story elements to figure out can be a helpful way to get it together - it depends on what kind of story you're telling: the genre, tone, length, and so on. But there on common things that go into the middle bit.

So what KIND of stuff goes in the middle part of a story?

The middle of the story has your character in unfamiliar circumstances. (the first Act showed us their usual familiar territory).

So our little fish is out of water in this part. This is a time for meeting new friends, sidekicks, and love interests (if you have a love interest, they usually show up right around the beginning of Act 2 if we haven't met them yet). The middle section is where we explore the theme a lot more, along with subplots.

Act 2 contains your “trailer moments” as well. What we in the Banes Academy used to call “Fun and Games” where we see your character dealing with the story. It's training for a fight or sporting event. Hiding your new alien pet from your parents. Having fun with your new magic powers.+

The middle is the place to learn lessons, meet new people, and have the Protagonist's horizons broadened and deepened…whether they like it or not.

After the actual halfway mark, things start to go downhill/fall apart. I've noticed this section can have its share of “trailer moments” as well. The hero might still be having fun, but things have gotten more intense. The stakes are higher. Whether the hero knows it or not, enemies are closing in. This is where friendships are tested or maybe lost. Things decay until some really bad event happens, leaving your hero lost, alone or feeling alone, and maybe wishing this whole thing had never happened. That they'd never tried to be something more than they were in the beginning.

And then we get to write the ENDING! We're here!

Painted into a corner!

How do you approach the large wasteland of your story's middle?

Been a few times I was so worried about the middle and stopped dead. Stuck for a middle. So I just plunged into the ending and went back to fill in anything extra needed to lead up to it and discovered that there was a middle already. Outlines help here big time. It's a journey. You want to be there and you're here-- getting to there is the middle. Even if no one goes anywhere in the story still a journey through the narrative.

The middle of the story shouldn't be a wasteland. That's where you get to write all the GOOD stuff. It doesn't even have to be a problem, per se, as long as there is some development between the beginning and the end. You can flesh out so much of your characters, your setting, whatever you want in the middle. I don't know why some writers seem not to quite get that. Though I do acknowledge that this is more a method approach to writing, which is good and can work for many people, so I'm very glad it's here!

@quinn o matic - that sounds really cool! And sounds like your rich, sheltered Protagonist is the fish out of water in the middle part of the story, foraging for food and stuff. Great stuff!

@usedbooks - yeah, that sounds very familiar to me. I do like structure alot, and find it super helpful - maybe essential to me for getting anything finished. But there's always a stretch of time where it's a big jumble. Bits of this, scraps of that, that slowly, messily come together. That's always part of it for me too!

@Xade - yeah, that sounds pretty structured to me. I guess if the "bigger and bigger hill" thing means more and more challenging obstacles, and maybe challenging to the character in different ways, then I'm in agreement with you!

@TheRedDeath - totally! Whatever gets it done!

I guess I see the story as an extension of the world and it's thesis. My story is about perception and faith, and so the middle of the story is about testing the protagonist's perceptions and faith, as well as an odyssey through aspects of my world I think the audience would find interesting that add to that thesis. For example: my protagonist is a rich sheltered girl, and at some point in the second act she is going to have to hunt for food, which can then be a scene that shows a shift in her personality as she confronts taking an innocent creature's life. That's my thought process. I think very mechanically, and don't write with my heart. My story is a series of scenes I find interesting and dialogue built around conveying information without looking like it. It's a process of problem solving, of figuring out what the audience needs to know and when giving that information will be the simplest and have the biggest impact.

To be honest, my writing style sucks. It's basically a jigsaw puzzle. I put in all the edge pieces -- the important scenes that fulfill the goal of the arc and theme (which are not necessarily beginning or end, but often a climax?), and then it's a frustrating jumbled search for all the other pieces I need for a complete picture. Sometimes assembling little clumps of like colors and then putting the clumps in place. But also two other puzzles are mixed in, so I have to figure out what doesn't fit and set those aside for whenever I am trying to assemble that other puzzle. Ugh. I hate my brain. I'm such a bad writer.

I tend to favor the roller coaster ride myself, with each hill bigger than the last until the final one is so huge it seems insurmountable but the hero reaches deep inside and figures it out. After that the ride smooths out and becomes all nice, the guy gets the girl, etc but then the final bump at the tale in opens the door for another, even crazier ride. However, I do tend to stick to a basic 4 part story. I write out a basic outline then fill it in in the "snowflake" method but modified to suit my needs. Then I go ahead and write the story, then the panels, though sometimes that's reversed. There are multiple ways to write a story. There is no right or wrong way. It's up to the writer to develop their own technique.

I think of my comics less in terms of "beginning, middle, and end" and more like rungs of a ladder. "What steps need to happen to get to the next step?" And so on.

@Gunwallace - We'll never make State 'Champs - the team at this academy hasn't won in nearly a century, and we're a just bunch of charmingly eccentric losers!

The division of the story in 3 parts comes from Aristotle (who, by the way, tought that it was true for tragedies and commedies, but not for epic, I think because epic is more like a TV serie while tragedies and comedies are more like movies). But in many manuals for writing the second act is divided in two, so I think it would be better to not think of a 3 act structure but a 4 act structure: 1) Intro, setting, enticing incident; 2) esploration (of the setting and characters); 3) The enemy kicks the hero in the butt, which causes the hero to have an existential crisis; 4) The hero gets his acts together and defeats the enemy.