The Dynamic use of Space 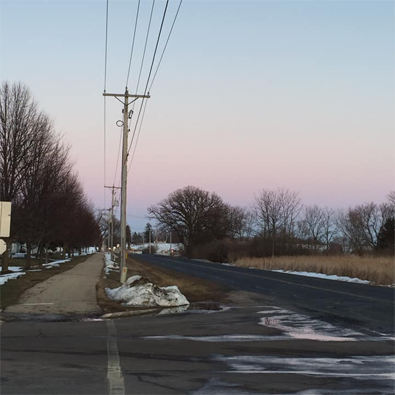 The physical space that a character inhabits often seems far more passive than it really is. Space is more than a matter of creating a backdrop, though. Why is it that some characters feel as if they’re moving against a wall paper background while others inhabit a far more dynamic world? It’s easy to chalk it up to art and be done with it, but I don’t think that’s necessarily true.

Think of an empty street. I’ll do you one better; I’ll provide you with one. Here: 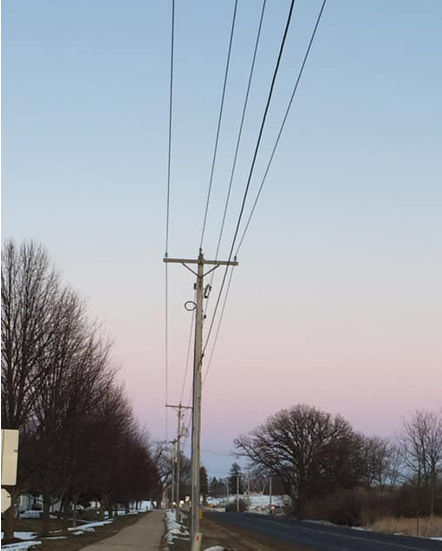 It’s deceptively simple, right? You could easily just plunk two talking heads in there and be done with it. But think of what could happen on this street. There’s a wild life sanctuary across from the houses. There’s also a dog park so lots of dog people walk up and down it. Maybe your characters were here and it reminded them of a similar place that had impacted them. Maybe they used to ride their bike up and down the path every day until they accidentally fell into a sewer and now they just walk down the street but now that they walk, they’re able to make more dog friends which in turn helps them to forget about their sewer fear. Listen, i dont know. It’s been a long day. The point is that backgrounds are more than just backgrounds.
When a character is in a personal space like a bedroom, you can use it as a way to convey that character’s personal tastes like in this panel, lovingly donated by damehelsing of Scorned: 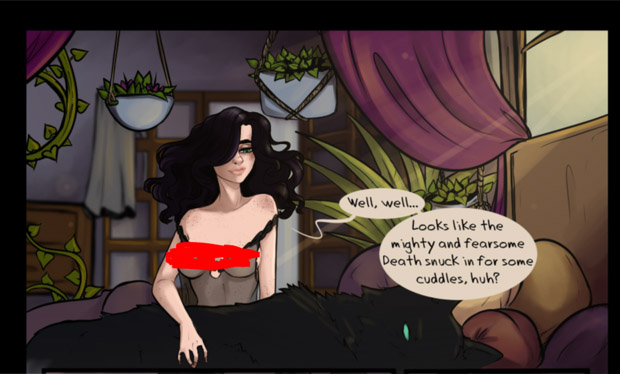 We can see her affinity for plants and the way they contrast with her dark surroundings. Death is literally sleeping in her bed but she is surrounded by life that is dependent on her for survival. She strides between both worlds and we can see that by the way her room is dressed. What sort of memories could be connected with such a room? What could go wrong? What sort of relationships could bloom?

A space can begin as a sanctuary but then turn into a place of unease and pain like we see in so many horror movies such as The Shinning and Alien. The Haunting of Hill House by Shirley Jackson takes the vitality of space to another level by making the house as if it itself is a living entity so that it no longer just houses the hauntings; it is entangled with them. As such, the reality that Eleanor experiences distorts due to her own insecurities until she eventually the house seemingly claims her as well. This is a common motif that we see in horror especially, but it hyper-intensifies the point; what does setting actually mean to your character? What is the fortress of solitaire to Superman? What is Xavier’s School for the Gifted to each of the X-Men? What’s the tower to Rupenzel? How would these characters change if any of these settings were different than what they were? You don’t have to actually answer this. Well, you can if you want to do it.

In the end, remember that a bed isn't just for sleeping in. It can be a place where people dream and have nightmares. It can be a place where life is made. It can be a place where a recluse sits to watch TV and eat their TV dinner every night. It could be a hand-me-down from a dead uncle or maybe it's just a couple of boxes stacked up on one another until something better can be found. You can apply this to any part of your character’s world experience whether they’re a medieval peasant who likes to go cave spelunking with a hot prince or whether they’re the wet-behind the ears, new exterminator for an apartment complex built on the fringes of the world of the dead!…

I like to use personal settings and possessions (and pets) to emphasize and amplify character traits or quirks. I have one character whose possessions are all Barbie pink and purple, including her motorcycle, toolbox, and sport supplies. I also got to show one character's slum-ish studio apartment, his coffee table made from a milk crate, patchy thin capet over rotting floorboards, old fashioned tube TV and Super NES.

Nice! I've most often used backgrounds to show comedic movie posters and stuff. I don't think I've ever seen the phrase "houses the hauntings". That made my day.