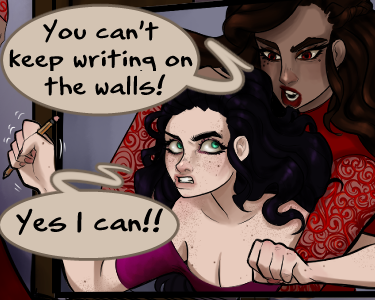 Everyone has a different way of jotting down ideas, writing out their stories and planning their comic pages. (even if it may be on the walls too…)

When I was working on Scarred Eden (rip my baby project that’s on a reboot loop) I had a document of timelines; I knew the story from start to finish and I had to just plug in the middle sections and flesh it all out and I believe before I started working on the pages I had about 10 chapters written all out.
When I was working on the timeline I was using a regular notebook and making bullet-points before moving to a program called AEON Timeline, which helped me keep track of details I deemed important (or unimportant) and I used LibreOffice to write and flesh my stories out.

However, I think my best and most used writing tool, is in fact, my imagination. I’ve written so many stories and side stories in my head but never really transitioned it to paper.
Scorned has yet to be written out. I know the entire story, I know most of the middle details of the story, but it really just resides in my mind right now. I’m constantly writing and re-writing small details and updating chapters, toying with what’s going where and deciding the who/what/when/where factors all from my brain.

I will admit that I tried writing Scorned’s chapter 2 out, I had my LibreOffice opened, I was starting to write like three comic pages annnnnd I just didn’t want to. For some reason, I just really liked having it locked away in my brain. Like the spark would just disappear when I started writing it. I can only assume the reason that happens is because since I know the story and the details of chapter 2, I just get easily bored trying to write it. I feel like I would have more fun trying to write out chapter 3 or 4 since those are the chapters that I’m really working on and the only chapters so far that are making the gears move in my head.

Right now, for Scorned, like I said in my one article, I’m mostly going with the flow and letting things happen, it seems to be working out okay since quite a few friends and readers have mentioned that it’s a smooth read and they become surprised when I thank them and say “I haven’t written anything out – I’m just trying to make it work with what’s in my head.” (← I totally respond like 10x more excited though)

I might actually start utilizing the AEON Timeline more often because Scorned’s story (in its entirety) does take place across one thousand years… So keeping track of the small details would be great. BUT for the most part, my stories kind of move inside my head like a movie but I get to hit pause and draw out the scenarios that I think are most important to show and also the most fun.

I want to know, what are your writing tools? And what is your process? Do you let your stories move by you like a movie? Maybe it’s like a book? Maybe it’s exactly like a comic? I want to know!

PSTTTT
Hey! If you didn't already know, you can advertise with The Duck for as low as $2 per day! In ANY spot you like!! And if advertising isn't really your thing but you still wanna show some good ole support to the Drunk Duck, maybe consider becoming a patron? There are perks to it like early access to quackcasts and being part of the EXTRA cool kids club. ;]
(jk there is no extra cool kids club but it would be pretty cool if you became a patron!)

Used to write prose, so it's MS Word all the way. Actually use a lot of its editing tools to move around blocks of scripts and merge ideas. Then there are so many rewrites. The story I'm producing now is very different from the script as scenes suggest themselves and interactions are sorted out. At times I realize the dialog is wrong when looking at the faces of the figures or discover it doesn't mean what I thought it did though the words remain the same. I write down everything and try to get it transcribed as fast as possible. My poor handwriting or stubbornly thinking I'll remember something has robbed me or more ideas than I can count. I know my weaknesses and how to deal with them so I get results.

I write in notepad. Since I follow a standard scheme for storywriting (Save the cat), but I still like to be free-wheeling while I draw, I basically never wrote down the whole story, just knowing approximatively at what point of the story I am relative to the story structure. I basically write down the story chapter by chapter (I'm now at chapter 7 of an 8 chapters story), for each chapter I write down a summary that I then break down in scenes (of 4-5 pages more or less), and then when I finish one scene I break down the short summary of the next scene in pages and pictures. I never do a storyboard though.

I have so many lost ideas because I never wrote them down. I've also had the fun situation where I thought I wrote down the dialogue, it took some time to get the cartoon drawn, then once it was scanned in, I went to get the dialogue to add to the art and... I hadn't written it down... and I forgot what most of the dialogue was supposed to be. So I had to think up new dialogue to go with the art and the characters open mouths. Not fun.