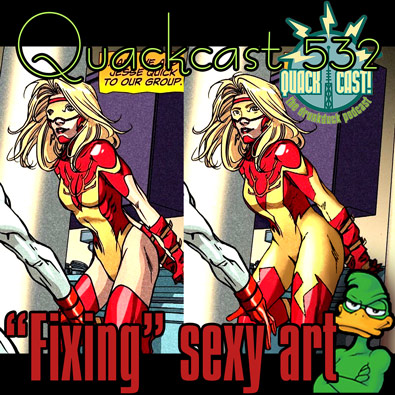 Tantz made a great newspost about this little trend of “fixing” people's art to make it less sexy, as if there was something wrong with sexy art. I think worst about it though is the implied moral superiority of the “fixer”. They're judging the art as non-realistic and “bad” (because it's sexy), and they set about “fixing” it to gain some sort of social kudos, slimming busts, increasing the girth of the figure, making their pose less provocative etc… I think the exercise would be perfectly fine if the context and the attitude wasn't one of “I judge this art to be BAD because it's sexy, I am fixing it to make it non-sexy and that will make it better! And you will all agree that the original was shit and I have improved it!”.

It brings to mind the church knocking off the genitalia of Roman and Greek statues during the renaissance and replacing them with fig-leaves to “improve” them. Doing different versions of art is fine and fun! But when we aproach it with an attitude of superiority then we're just being massive dicks about it. And you know what happens to dick in art don't you? They get knocked off and replaced with tasteful leaves :)

This week Gunwallace has given us the theme to Inhabitants by our very own Pitface!: Serenity and orange calm, suddenly shot through with the energy of a tribal beat and a burping, growling rhythm! Coming together suddenly with a crescendo blast! And once more the calm returns.

While I admit that a show should respect the audience watching it as well as abide by the rating (G, PG, etc.), I don't find it right to "fix" character designs in general. From an artistic viewpoint, it's like overdubbing to make art more tame, but in reality, you're essentially committing a form a vandalism to the art. If the work is too adult, then you need to graciously accept that it was never meant for kids and that is ok. Some comics and cartoons just aren't.

@PIT_FACE - That is a really good tune. Like entering and exiting a pocket-dimensional nightclub in the lands of limbo^^

guys, the Inhabitants tune is SO GOOD.

@Hushicho and @Damehelsing exactly, there's really no justification for it, it's just self aggrandizement.

I'm glad this is being discussed, and I agree with so much said! And as for "think of the children" -- to hell with the children, I say! After over a year of dealing with a plague and politicians constantly endangering these children we're supposed to think of...but oh, it's fine to use them as an excuse when it furthers someone's narrow political goals. But to return to the main point, art "fixes" are, most often, someone using a superior foundation in a picture to just build their low-effort "fix" off of, and get fame and adulation through what is mostly someone else's work, which incidentally they're calling inferior. Skeezy. It's different if you're creating or extensively revising a narrative, or wholly redrawing a piece as a statement. Art "fixing" is just editing and riding on the other artist's shoulders, and it says very little about one's actual ability as an artist, but a lot about what kind of person one is.

also on the subject of fixing art to make it less sexy, why?? if it's the whole "think of the children" thing - no, children grow up, we all grow up and develop our own interests in the human body, sure, keep the kids as innocent for as long as you'd like but they DO grow up. It makes me wonder if this is really a "think of the children" or something to do with a person's internal insecurities, it's ok to be insecure, we all get a little insecure some times, but... a drawing is a drawing... that's all. I feel like if we embraced the human body more then we wouldn't be having these problems.

Trying to "fix" art is a dick move. Period. You're claiming that what the artist did is wrong and that you can do better and then proceed to shove it in the original artist's face, it's like the "my 5 year old could do better" argument. It's just rude and disrespectful. If you want to do your OWN spin on it, that is perfectly fine, if someone sent me a spin-off of Hel as a blonde I would be intrigued and that would be absolutely okay! Or maybe if someone did a spin of if Muirne's breasts weren't the size of Jupiter, that's cool too! I enjoy seeing different opinions and views, but "fixing" is not something I'm okay with. There's nothing wrong with my characters or my style, but if you want to instead give me some tips on anatomy such as the human neck can't turn a 180 then that's fine!

@Andreas- yeah, that was a shocking story about that painter :(

Inking is different if it's the inker's job to DO the inking haha! If they're just doing it of their own accord though they're probably being a little dickish.

Okay, what about Inking and fixing someone’s pencils? If it came to that, I understand. However, I do ask questions if I don’t translate well what the pencils look like. I think most inkers do this as well.

By the way! About Tantz's story there about the painter who had this other person "fixing" his painting. I couldn't help but imagine this following scenario of the artist taking the painting and smashing it right over the "fixer's" head, his head sticking out through the canvas looking back at the artist in shock of what just happened, with the artist telling him "here's what I think about your "fixing", pal! It sucks and so do you!" Seriously! What a disrespectful, arrogant prick!!!

Indeed I think it is wrong either way. Wether you are "fixing" someone elses art by de-eroticizing it, or doing it the other way, eroticizing it, or changing the artistic intent or just the artist's style, Damehelsing brought up an example on Tantz's article where she described how someone was "fixing" her artwork by making the male characters eyes smaller because they thought they looked too feminine, either way I think are examples of people intruding upon someone elses art. Their basically hijacking it and using it to serve their agenda, which I do think has more to do with their own self-serving then anything else, when they should just make fanart from scratch or even their own original stuff. There's nothing worth of praise, certainly nothing egalitarian, to draw over someone elses piece of art and say "its better this way" with no license doing so presented to them other then "because I'm better then you, because I say so", using idealism as a mere pretext. It's bullshit!