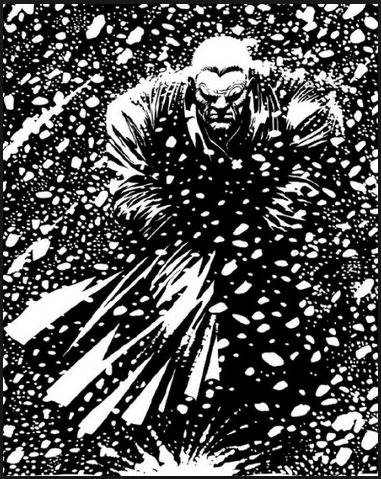 Snow changes everything. The entire environment is completely different, and the minute-to-minute operations of life become more complicated and troublesome.

In comics, snow can be a lot of fun. Flakes can fill up the pages and add to the grit and danger in comics like Sin City…

One of my favorite X-Men stories was when a little girl gets sidetracked in a blizzard and encounters a nearly-dead Wolverine, who's being hunted by some vicious adversaries. Classic! 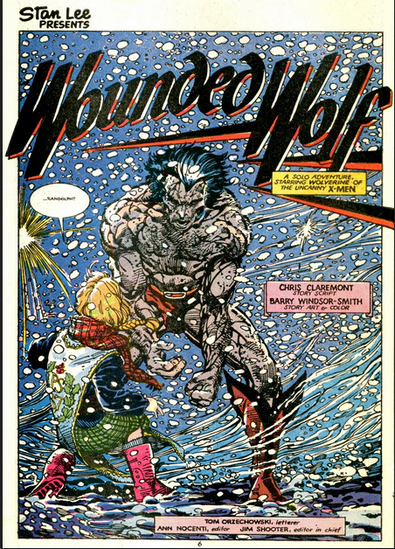 Another great snow-centric comic was in an old issue of Amazing Spider Man (#277, Google tells me), where a Wendigo (creepy mythical monster) stalks New York during a blizzard.

Snow can also create an atmosphere of quiet calm. Again, same as in real life.

Of course, the legendary snowmen from Calvin & Hobbes are too great for words!

I did one issue of Typical Strange that featured snowy weather, but the story had nothing to do with snow, or Christmas. I just wanted it to be snowing, and adding the snow to every exterior panel was a lot of fun and looked great to me. Having a different season gives things more texture and reality, I think.

Snow has a vibe, an atmosphere when it's falling, or even when it's just covering the landscape. The winter season adds so much to the Peanuts comics, as well as South Park and Calvin & Hobbes.

Blizzards in suspense or horror stories are drawn in a wild, distorted style, with wacky shapes to the flakes that add to the kinetic excitement or danger and oppression of the weather (and the story).

The quiet calm of a landscape covered with snow, most details obscured, can give a nice effect, too, just as it can in real life.

Is it snowing yet where you are? We're expecting our first one of the year today/tonight from what I hear…a little later than usual. Do you have a love/hate relationship with the stuff like I do? Do you feature snow, or variation in weather and seasons in your comics?

-Banes
from the Best of Banes Collection 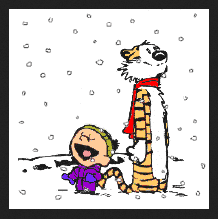 Snow is awesome. Everything somehow looks great in snow - or extra shabby when it's old sludge. It looks like a pain to draw, but it actually isn't at all. I use every opportunity to take snow photos that I get, because we only get it every now and then - think Southern English climate, it's just about the same. The one thing I hate about snow is either incompetent drivers acting as if it didn't exist or even more incompetent drivers who panic and block everything - contrary to popular opinion these latter are at least just as dangerous, if not even more so, and you see both kinds very often here. Is it as much of a problem in areas where there is snow on a more regular basis? Anyway, remind me to make a comic of it one day, it'll be a fun way to get back at them...

One that comes to mind but not so much about snow or snow fall are cold weather places in movies and shows. It’s snowy all the time. That always brings me back to my first black and white Ninja Turtle issue where Leonardo was walking through the snow in a blizzard. It’s was peaceful and yet haunted with suffering. I even felt that way with Groo the Wanderer as he was walking through the snow. I have never drawn a page with snow yet and I Believed I could not handle the backgrounds when I was younger. Later, in years I joined a small group of artist here on the Duck. The challenge was to draw the previous artist who commented before you to draw two of their pages but use your own characters in place and slightly change the wording. Mine was a snowy Background setting. Prior to that, It never dawned on me to even add that element to my comics before. Now that you mentioned it, I will look to adding a snowy or blizzard type Addition to my story.

@Jason_Moon - That's odd:/ I can still find and read Demon Eater on DD. I even signed in and out just now and there it is still.

Snow is beautiful. BTW, unrelated but I signed on the other day and I couldn't find the Demon Eater comic! Jillyfoo must have deleted it! Made my heart stop to see it gone, it was the first comic I read on drunkduck when I came on here in 2017.

No discussion of snow in comic art would be complete without a shoutout to Calvin & Hobbes, so major props for bringing it up! My favorite thing with the X-Men page is the art credit for "story art." It's an important distinction in sequential art. I've only done snow once in a holiday picture for Fusion, and the final product did turn out rather pretty, but my methods weren't anywhere near as stylized as the example in this article.

Love snow. I'm always been one who's a bit more for cold weather rather then warm. And that's not a Scandinavian thing, I promise. I've known plenty of fellow swedes who prefer warm weather. I believe there is going to be some snowy weather in the future story arc of Molly Lusc called "Kill of Hearts" which will come after the story arc called "Close Call", which is a shorter story arc preceding the current story arc called "Spark in the Deep".

I looooveeee having snow in my comics. Right now, SCORNED has a chapter with snow, we're going to reach a very snowy page soon and I am excited. I think snow can really add a cold charm effect with a bit of a spookiness to it. Snow is honestly my favorite sort of weather.