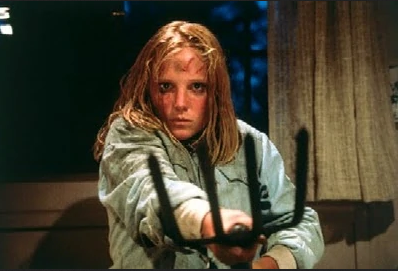 There has been a lot of online discussion in recent years about the idea of “strong female characters” - what makes a good one, a bad one, etc. All the accusations of sexism, either anti-woman or anti-man have gone along with these discussions, in the glorious, exaggerated way people argue online.

There are questions I've pondered about why certain female characters are held up by media sources and producers as impressive and important examples, while other fantastic characters are ignored. I'm still not sure why this is.

Like, why is Captain Marvel an important female character, while Gamora isn't?

Why is Rey an shining example of a female hero but Michonne (from the Walking Dead) isn't?

I haven't found an answer on this. Granted, I haven't really looked that hard. I'm busy, y'know?

Speaking of the Walking Dead, whether you know it or not, or like it or not, it's had quite a few terrific female characters.

People talk about Ripley, and Sarah Connor as shining examples of female heroes who everyone likes. I would add to these ass-kicking ladies examples like the aforementioned Michonne, as well as her Walking Dead cohorts Carol (one of the great TV characters). Also, there's Beatrix from Kill Bill, and her opponents like Elle Driver and O-Ren Ishi. Terrific, heightened-reality action characters. There's also Starbuck from the updated Battlestar Galactica, and her co stars like Six and Athena.

Actually what I intended to talk about here was the other kind of strong female character. The one who's not all about kicking ass (although they sometimes can if they have to). What about Dana Scully? Or Clarisse Starling? Or President Laura Roslin (again from Battlestar).

These are more vulnerable characters, with more traditionally feminine qualities than the tough kickers-off-butt (although these ladies are accomplished in their fields, and strong willed indeed!).

Incidentally, Wanda from the Avengers movies and WandaVision, even though she's off-the-charts powerful, fits into this more traditionally feminine type.

I'd also give props to the final girls from my beloved slasher series. Creators have said that female leads seem more vulnerable in horror stories, which enhances the fear and stakes - it's also satisfying when these characters find the strength to struggle against their attackers. Shout out to Laurie from Halloween, and Sydney from Scream, and Ginny and Alice from Friday the 13th, and Nancy from Nightmare on Elm Street. So many others!

Anywho, there're some scattered thoughts.
Now come on in; it's ladies' night at club Banes! Half-Price on glasses of water!

When this subject comes up I think of Sweet Dee from Always Sunny in Philadelphia. They were unsure how to write for Kaitlin Olson. She told them to just worry about writing a good character, and she would handle the "being a woman" part.

There are good points here To be seen as a strong character, (and not just physically) you need to show them facing and overcoming adversity. Thus only main characters in most cases. Support characters are treated as props to support the lead, and ignored Inner Strength is harder to portray then physical strength. However, although men are expected to face the dangers head on, women in society are expected to take care of things while the men are away. For example, during a war in the old days, women were meant to take care of everything, including fufilling the men's jobs, and stop things from falling apart. (what they managed it means that the guys were mostly only needed for making a new generation and protecting the ladies) When a female is cast in the male adventurers roll, (often to have a strong female lead) the writters often think to present them as how a male lead would be for the most part. This can ruin the character. These are just a few points I thought of.

I'd like to add a shout-out to those few badass mums and grannies that have a leading or strong supporting part (and are not just there to add colour), like Thursday Next, Miss Marple (even if she isn't), Granny Weatherwax (nor her), Nanny Ogg, the Norwegian Grandma in Roald Dahl's The Witches and others that I'll later feel stupid not to have thought of right away. And before anyone accuses me of glorifying traditional roles, let me just mention that even if you remove all the cool fictional parts this type of character has the toughest job of all in either gender. Interestingly, two of the five in my above list have never had children of their own, but they are a similar type of character and have this particular brand of (superficially) domestic badassery that defines them.

@Ozoneocean - Like, Rambo the way we see him in Rambo 2 and 3 or Steven Seagal in the way we see him in ALL of his films is cool and okay to watch from time to time, as long as we remind ourselves that these are over-the-top caricatures of what a strong person is supposed to be and should never be taken seriously.

I feel that what makes my female protagonist Molly Lusc a strong female character is her ability to both dare and deal with the entropy of her world. And I don't mean that as in being some sort of Nietzsche-esque pain-spounge, or embodying Vince McMahon's bullshit saying "you gotta learn how to eat shit and love it". By daring what I mean is that she is someone who can be afraid and confused, and sometimes weak and desperate, but ultimately doesn't let that be a hindrance in her life and never let herself get stuck with shame or complacency. And by dealing I mean she always finds a way to roll with the punches and have this flow with the chaos and disorder going on around her, dealing with her problems, her enemies and her obstacles in whatever way she needs to. It's her ability to lessen the pain, which is how to actually deal with it, not just take it or give it raw and senselessly. Not sure if I make any kind of sense with this talk, but it's the words my mind wanted to type^^

Hushicho is right. Dunning Kruger means we all think we know more about things that we don't know anything about. One of those things is stories... We all cosume stories so we all should know what's what with them should we? What makes a strong character, what makes a good story, stucture etc... But we don't. Most people know very little apart from that they like or don't like a thing and then try to rationalise afterwards why that is. I don't exclude myself from this, ther is a HUGEEEEEE amound about story stucture and technique that I am pig ignroant of. Captain Marvel and Rey are characters that are "strong" only in powers, they're litterally strong. They're like Rambo in Rambo 2 (not first blood), there's nothing too them but they're fun for people who like dumb movies (like Rambo 2 or Steven Segal movies). They offend people who like good stories but not everyone is that bright. :)

Marcorossi is onto something there.

Most people really seem not to understand what makes a character or a person strong, and as a result, there aren't many strong characters of any sex or gender. It's worth noting that the Strength card in the tarot is usually represented by a delicately beautiful woman taming a lion peacefully. So often, people seem to forget that strength doesn't mean "the ability to beat someone up". But it's characters that don't have the raw power to just ride roughshod over any obstacle who often have to show strength in other ways. People often have very subjective and highly biased ideas of which characters are good in that sense, and which are bad.

It seems to me that there are two separate questions that get mixed: on the first hand, structurally most stories have one lead from which eyes we see the story, who makes all the personal growth, and other charachters (even important ones) exist as an object for said character. Since in most movies the lead is male this means that most female character are relegated into the "object" category, thus being the loved one, the nice wise aunt etc.; from this point of view stories like Cinderella where the lead is female and the male dude is a very objectified Prince Charming are "pro women". On the second hand content-wise if we look at the social roles represented in those stories, Cinderella is a very anti-feminist story because it implies that the purpose of the life of a woman is to be beautiful, do household chores and marry rich. It seems to me that many people confuse the structural and the content aspect and therefore by "strong" they actually mean "protagonist".