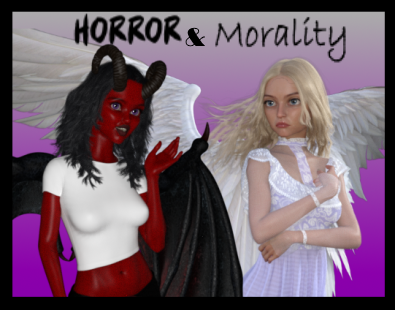 The idea of “sin” is a prevalent one in horror stories. In terrifying tales, the monstrous against the human also explores good vs. evil.

There is often a “sin” perpetrated by horror Protagonists. The classic Psycho begins with Marion Crane stealing money from her job. Her intentions are understandable, maybe, and she realizes it was mistake soon enough – but is it too late to correct that mistake? I won't spoil the answer; a lot of people have never seen this classic, and you definitely should!

This interpretation came from media people, but I think they're right; youths having sex when they were supposed to be watching the campers was what caused Jason's drowning to begin with, so this stuff is baked right into the Friday the 13th mythos. Before Scream expressed these “rules”, they were sort of there and sort of understood already.

On the other hand, John Carpenter who made Halloween has resisted this analysis of his classic slasher movie. He says Laurie Strode is the final survivor not because she's a virgin, but because she's paying more attention to what's going on around her. Her friends are more distracted.

But ‘not paying attention’, a sort of passive “sin” can land you in a horror story too. The whole point of the SAW series is that characters who are not engaged properly in their lives, not appreciating what they have, become victims locked in Jigsaw's horrible traps. That's enough of a sin sometimes!

I'll bring up, once again, the bickering or tension-filled couples in The Strangers and Vacancy, and I'll add in the low budget ‘Open Water’ as well. The couples who don't value each other, and are on the verge of throwing away what they have - these are good candidates for horror movie MC's.

Even in stuff like “Creepshow” and “Tales from the Crypt”, which can be heavy handed in their writing (I say that with affection), the morality is right up front. Evil is punished and Good survives, almost every time.

Of course, there are stories where the innocent lose, suffer and die, and the evil escape unscathed (or the evil wins). This happens in horror stories as well as other genres. Is this more how the real world works? Is the constructed kind of morality just a comforting fantasy?

Hm. Nothing like ending on an happy note, eh?

In any case, horror stories are often the ultimate expression of morality.

Have a Good One!

I hate the Scream series, and part of that is because it invented "rules" that never existed, just stereotypes that the film's writing exaggerated, and wannabe horror aficionados took at face value. In Halloween, Laurie manages to survive largely because she's working a job where she has to be very attentive...buuut also because Dr. Loomis is the real protagonist, moving the story, and he saves her in the nick of time, because they only meet at the very end of the film. In the original Friday the 13th, the survivor, Alice, just got out of a relationship with a married man, whereas many of the others were caught trying to just help someone they thought was in trouble. The horror should be that the people are relatable, not that they did something that the greater narrative punishes. That's not horror, that's just being sanctimonious.

Wrath: The desire to destroy. It may be born from seeking to destroy the evil, or because seeing people happy with something causes them pain. There are two main types. Hot rages is when people can't control themself and vents their fury with agression, including beserker rages. The other is a cold rage where destroying their target in the worst way is all that matters. They would even protect their target just to make them suffer longer. For an example look at Cain from the Bible. NOTES: I know I listed 8 not 7, but I had to diffinatriate between Pride and Vanity, which are normally combined as being the same. For me all of them are based around one thing and makes me think "Evil is selfishness at the unwarrented expense of others." Most of the "Sins" in moderation can be good. Vanity can drive people to act properly and be upstanding members of socity. The sins can be combined in different ways to make different problems.

Sloth: Laziness taken to extrems. It is apathy and uncaring. It is people chosing notto take things seriously and letting others chose for them. Not paying attention to dangers comes here. Envy: You want what others have just because they have it and you don't. You may not even like it, or hate it, but you can't let others have it. This is the "Keeping up with the Jonses" and if you can't have it, no-one else can as you will try to destroy it. This includes stealing someones partner or breaking them up just because they are happier then you, and worse. Lust: Wanting to sate your passing desires, of the flesh and of others. There is a reason wanting to kill others is called bloodlust. For them there is no long term plan, just the desire to do as they want. This is the domain ofpower trippers, rapists and many school bullies

When people mention sin, and what is a sin, they often bring up the 7 deadlies. I have looked into what they are at their most basic, and how they are broader then they seem. Pride: You are so sure of yourself you can't see what is wrong. This includes overbearing parents, and egotistical people. Vanity: You seek to be praised and hide thy flaws. You sabatage others just to look good and boast of thy deeds. They are the attention seekers and socialites. Image is all to them. Greed: You seek to have more and more. Not just coin, but also power and influence. You horde favours and further yourself in life just to be more powerful. Glutony: The desire to sate your hungers no matter the cost to others. Not just of food, but the sin behind consumerism where people always need the latest jut because it is new and despoils ecosystems.

@marcorossi - I think so too. And those teen slasher movies are doing it because that sexy material sells, and is appealing and relatable to the audience. I'd say that anything written with any kind of genuine approach will have a morality to it - the morality of the writer. Or the morality of the world the writer is writing in. I remember The Secret of my Success. Used to love that movie; I wouldn't have connected it to this morality topic; good point!

I think that some horror movies, the ones that are largely targeted to adolescents (e.g. the Nightmare on Elm Street serie and I assume also Friday 13, though I never watched it) work on feelings of guilt about sex py adolescents, who are transitioning from a period of their life where sex is 100% unspeakable taboo to another period where they are sexually active. But I think that some underlying "moral" exists in all stories that have some emotive effect, not just horror; it just happens that in some cases we don't recognize the "morals" as such. For example "The Secret of My Success" from 1987 is a movie where the hero engages in behaviours that aren't really "moral" according to common morality but represent Yuppie morality, so it is just another form of morality.