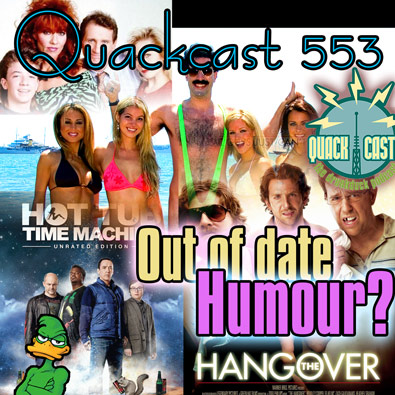 I was reading an article the other day about the comedy of Sacha Baron Cohen and how that style of comedy is now out of date, along with The Hangover and Hot Tub Time Machine. The idea is that the day for this sort of masculine, bawdy, sleazy humour has been and gone and that we're more advanced, sophisticated and enlightened now. Personally I took issue with this, I think this style of comedy is extremely relatable and eternal because of it. You can see examples of it going back thousands of years across all cultures because many factors of it are universal to the human cultural experience.

It's inappropriate to make fun of people for things they can't change about themselves. We should never “punch down” by making fun of groups who don't have power in society, like the homeless, ethnic, sexual and religious minorities. But sex based humour, or humour based around a masculine point of view, even if it's tawdry and immature, is not wrong or inappropriate. At least that's my feeling on the matter. It's a complex subject and Banes and Tantz had slightly differing points of view and we touch on things like satire as well, you'll have to listen to the Quackcast to hear them! :)

When people talk about crass, “out of date” humour they usually reference Married With Children. This is another thing that really gets to me because they totally ignore the cultural context of that show. When Married With Children came out in the late 80s is was a breath of fresh air and sharply contrasted with the predominant style of comedy coming out of the USA at the time, it was completely dominated by glurgey semi dramatic sickly sweet comedy with a message, shows like Golden Girls, MASH, Family Ties, Growing Pains, Different Strokes etc. The list is HUGE because that was the main style of comedy and it continued well into the 90s. Those examples were all very good shows, but they has a massive dose of sentimentalism which Married With Children totally eschewed and that make it very different and special. Today that kind of cynicism is not a rare thing anymore but back then it was and we have the popularity of Married With Children to thank for reintroducing it into our culture. Its bawdy, raunchy comedy is just as relevant today as it was then because the archetypes it's based on are just as universal.

What's your opinion on so called “out of date” comedy?

This week Gunwallace has given us the theme to The Designersaurs - Rocking, bopping, pop! Finger-snapping fun. This joyous, light, bright ditty is designed to make you happy and ready for fun. A good piece of synth electronica, reminiscent of 80s future music.

Out of date comedy? Yeah, that's me.

@Amelius - Golden girls was great nd hasn't really been successfully replicated since but it WAS solidly in the mould of the style of USA sitcoms since the 1970s which was to have dramatic moments, a message, and scinecre characters who cared about each other, despite everything else. It's that overall meta style I'm talking about rather that the merits of the inivicual shows. Married With Chrildren seed to be the first popular hit comedy in the USA to break with that trend.

Wait, dude... you're calling Golden Girls "semi dramatic sickly sweet comedy with a message"??? THE Golden Girls?!! The one with the sarcastic old broads that call each other slut!? Good sir I think you might not have watched the show if that's your assessment! You're massively underplaying how special and different Golden Girls was at the time just to put MWC on a pedastal. There weren't a lot of shows about old women at the time either, let alone one where old women could be raunchy and sardonic, flawed characters who say ugly things to each other like a real family does. https://www.youtube.com/watch?v=n6RI7vVXwx8

I'd take issue with MASH being lumped in with other sitcoms. MASH did some really cool things (just saw an episode the other day that was in real time, complete with a ticking clock in the corner), and could really hit hard with the horrors of war. Despite a general light-hearted tone, it could really get dark. I'd argue that "All in the Family" is particularly relevant today with so many people subscribing to an "I'm not racist but..." mentality that defines Archie, but I'm sure it'd be way too offensive in today's culture.

Humor is very subjective. What someone finds it funny may not translate to someone else's. For me, personally, I love physical humor which has been quite lost nowadays. Something about someone falling and getting hurt can translate to laughs. It's kind of action and reaction. Of course, we don't want anybody in real life to get hurt but watching something like Tom and Jerry or older silent movie comedies were all physical. Sometimes, for me, that today humor has too much talk instead having the action. I do Improv acting from time-to-time with friends and many times, you'd see me falling on the floor, tripping, playing dead etc... it's more fun for me and many laugh at my silly antics.

Also, I noticed that often person speaking how some type of humor is inappropriate, especially today, is a serious case of Karen. If you don't like something, simply don't watch it. People have different taste and while you may not, there are some who like crude grunt humor. I actually like throwing some sex jokes from time to time and nobody will stop me from putting them into my comic.

The humor I would call "out of date" is making lazy references where there's nothing else. Something like you could see in Epic Movie or Date Movie. Creators were just throwing whatever was popular at the moment and after few years nobody will get it. It doesn't mean that you can't make this type of movie well. Spaceballs is a great example. It's a parody of Star Wars, but you can watch it without knowing much about Star Wars and it still will be funny. Sasha Baron Cohen is really great when you understand that he's not creating to make fun of stereotype, but he plays stereotype to record reactions of real peole. On the surface Borat or Bruno seem to be this low humor, but the real joke is that those are real reactions of people who believed that they are part of some small reality show and Bruno and Borat are real.

I don't know about outdated comedy - some of it, especially in satire, works only in the specific context of when they were thought up, but the rest is pretty much timeless. But I do know that the "up-to-date" humour I generally see in the mass media is neither more advanced nor more mature nor more enlightened and most definitely no more sophisticated. It just comes in a different package that doesn't recognise the difference between teasing and bashing any more and thus lets political correctness get in the way not only where it should but also where it shouldn't.

"we touch on things" That's totally inappropriate unless the thing has consented to be touched! ;-) BTW the working title for Married With Children was Not The Cosbys since they were creating a show that was the opposite of The Cosby Show, which given what we now know about Bill Cosby would make you think the haters would like Married With Children. ;-)