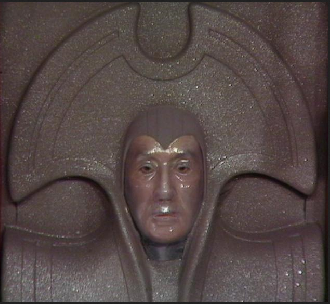 Robert Zemeckis, director of Back to the Future, Forest Gump, and Who Framed Roger Rabbit among other great movies, made a more obscure dark comedy called Death Becomes Her. The subject matter involves magic related to living forever…even after you're technically dead.

This has always been one of the tropes of sci-fi, fantasy and horror that scares me. Of “magical” or fantastical tropes, it might be the idea I find most scary.

A lot of horror stories get their “juice” with audiences from the fear of death. I get that, and feel it, and I'm not in any hurry to die. At the same time, I don't fear it. The idea of living forever, though - that's a scary idea.

…To be clear, I'm not talking about the idea of an Afterlife. That's different. I'm talking about an enchantment that allows a person to live forever, in the physical human condition.

I always think of the idea of a deteriorating body that will never allow the consciousness to die, an eternity of torment or being trapped forever…most stories, at least horror stories, will never have a positive outcome for this eternal condition!

Or just imagine the pain of losing everything and everyone you care about, over and over - or the existential, infinite levels of boredom that would come with this kind of curse.

One cheeky tale about a narcissistic dude who wishes to live forever, then kills his wife, thinking he'll try out the death penalty. His savvy lawyer gets him a deal, though - life in prison!

There are other fantasy/horror stories that end with magical, eternal prisons. I don't want to spoil them, though, and to be honest, this subject is starting to freak me out so I think I'll end here.

I do enjoy life. Is it weird that I find comfort in the fact that it eventually ends?

Am I alone in this? Does this idea terrify you? What are the scariest fiction tropes for you?

My second thought was THE GREEN MILE. Tom Hanks attending a lot of funerals at the old folks' home. And his mouse.

Verree eenteresting as always. My first thought was Heinlein's TIME ENOUGH FOR LOVE -- a group of otherwise ordinary people who just happen to have evolved really long life spans and must keep it under wraps, or else. I'm aiming for 100, anything extra is a bonus.

@Corruption: you're conflating the Wandering Jew and the Eternal Mercenary. The Wandering Jew heckled Jesus on his way to Golgotha and cursed to Eternal life never knowing rest until Judgement. The Eternal Mercenary is none other than Longinus who pierced Jesus in the side and the exact words were "soldier you are content with your lot, so shall you remain until we meet again " again cursed to wander and fight and be a soldier forever but never die. Wagner made the Wandering Jew into a prostitute (and coworker of Mary Magdalene) who had laughed at Jesus on his way carrying the cross. She tempts Parzifal when he is on the Grail Quest . Wagner did a couple of operas about the curse of eternal life. The Flying Dutchman? The music may be heavy but the story telling is often very good.

Some of the legends are very nasty, and one is linked to Christianity. The Roman Centeriun who struck Jesus down for beingslow while carrying his crucifix said to him "Move one" Jesus said to him "I shall move on, but you shall remain." Dude was cursed with immortality according to some beliefs. This means he will not die and face Judgement, but be stuck on Earth as it is cast in the lake of fire. One greek myth had a guy granted immortality, but not eternal youth. This means he is thousands of years old, withered and can't move. A classic story is "I have no mouth and need to Scream" To (possibly incorrectly) quote Steve from Life and Death "No death means no escape"

@Paul - I have to imagine there are ancient legends with this subject, yeah! I agree; it's the stuff of real nightmares! I'm glad you made it through your bad experience and it left you with a lack of fear about the end...that's a good place to be in my opinion!

As always, there are of course two sides to the medal. When I took a writing class once upon a time and one practice topic was "death penalty - yes or no" (it's not a real issue in my country, which has had a firm "no" in its constitution for 75 years) I shocked a number of people by arguing against it by reasoning that imprisonment for life is much worse than death and those bastuhds don't deserve the easy way out. Horror (and fantasy) uses this very concept, too: eternal imprisonment/entombment is an all-time favourite trope - either literally or by being bound to life by a curse or by being trapped in your ageing/decaying body - these things are the real McCoy for nightmares if you ask me. It goes back right to some ancient legends, if memory serves. As for the catholic idea of eternal life: Julian Barnes gives it a wry twist in one part of "A History of the World in 10 1/2 chapters". It's not horror, but an awesome (as well as entertaining) book that I very much recommend reading.

Quite a philosophical post. You, Banes, are not alone - I very much feel the same way, although having about twice as much time to live in would be nice. Years ago I was in danger of dying once, and it was such a painful experience that I wouldn't have minded at some point. I totally prefer living, of course - on the whole it's much more fun and you get things done - but since that time the thought of death has pretty much lost its power to scare me.

@bravo - Yep, that's the one. I read it in the Twilight Zone story collection. Not sure if I've seen the episode, weirdly enough...yeah, I can imagine the emotion of losing people and losing everything would just create a sense of meaninglessness beyond belief.

@EssayBee - Ha, that would be a different tone to the Mr. Freeze story, yeah! That kind of thing is extra creepy...being a disembodied head or brain that just goes on and on. *Shivers*. And yeah, I read 'The Jaunt'. Very very disturbing. I couldn't shake that one for awhile after I read it. Now, years later, it still pops into my head from time to time, haha.

@marcorossi - I've had that nightmare of being buried alive. Frikkin' terrifying.

@ozoneocean - Interesting! It's possible. I've seen so few movies from before the age of Christianity; i'm gonna look for some and see if the concept exited before that. To me, it's probably built in to us as humans. Throughout history, our lives are defined in a sense by the fact that they're temporary. I would imagine that it wouldn't be much of a leap for some people to imagine a life that doesn't end. To stay here much longer, like the rock and the tree.

The scenario you described is from Twilight Zone. Escape Clause with David Wayne. Seeing your loved ones die again and again? You see them age and die one after another, see your children die and you live on. Bad enough losing them once or twice but over the centuries? It would grow very tiresome and sad given enough time.

Also, along similar lines is Stephen King's short story "The Jaunt." The concept and climax of that story puts a horrific twist on the "living forever" trope. That's one of those stories that just stuck in my head thinking about it.

I remember an interview (might've been an audio commentary) talking about the plans for Mr. Freeze in Batman Beyond, and one of the ideas was to have the old Bruce Wayne open his refrigerator and Mr. Freeze's still alive head be in there and start to yell at Wayne, at which point he just closes the refrigerator door. They ultimately went with a much more emotionally moving direction, but this would've been darkly hilarious (and horrendous).

@Ozoneocean technically the official catholic belief is that everyone will be resurrected IN BODY, but only "the just" will get to purgatory or paradise whaereas the unjust will be stuck in hell; it is generally assumed that people who are not baptized count as "unjust". ( https://en.wikipedia.org/wiki/Last_Judgment#Catholicism ) However christian/catholic beliefs about the afterlife are a mess because are a rationalisation of different beliefs IMHO (e.g. paradise and the resurrection of the dead IMHO have different historical roots).

It seems that the fear of being buried alive is very common ( https://en.wikipedia.org/wiki/Taphophobia ) and in the 19th century it certainly was a trope, so maybe living forever while getting older and older or living forever in a prison are the same?

I'm pretty sure that the idea that living forever involving something bad was born as a trope from two things: 1. Rationalising that living forever is impossible so we make the idea of the fantasy sound like something negative so it stops people lusting after it. 2. The religious influnce, Christian specifically: Christianity is a death focussed religion, you can only attain "everlasting life" if you die and ONLY if you're Christian when you do it, so the idea of physical immortality is an absoloute anathema to them, almost satanic. The idea of immortality with our current state of technology and society is pure unnatinable fantasy, so there are zero scenarios that are more likley than another (ie living forever in pain and isolation or living forever in bliss or gaining knowledge etc), So I think why not embrace the fantasy in its BEST form? -Life eternal with no suffereing, just the ability to grow, learn and experence new things without an end date, eventually becoming godlike ^_^