Felix the Cat: A Lesson in Comedy 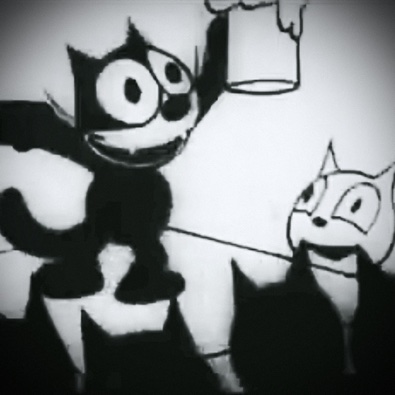 Today, the United States celebrates Labor Day, a day traditionally used as a break from a day of work. It also signifies that Summer is coming to a close, schools are back in session, and the time has come to tuck away white pants and seersucker patterns until next Spring.

Just the same, days off are taken seriously around here. I celebrate today by watching black and white cartoons first released nine decades ago.

-The opening scene of “Woos Whoopee” (1930) begins on a bustling city night as the first person camera pans into the front doors of a nightclub.

-Felix the Cat stands on a table holding a pint of beer in a room filled with a mixture of anthropomorphized creatures such as rabbits, bears, goats and other felines.

-Felix drinks his beverage, met with a huge celebration in the night club, while at the same time in another part of town, another cat, wearing an apron and holding a rolling pin in falling asleep by a grandfather clock in a living room.

-Felix, busy dancing with the other animals in the dance hall is now cast outside at three o’clock in the morning where an inebriated Felix must wander down the sidewalk in the wee morning hours.

-An argument with a lamp-post turns into a funny encounter as Felix attempts to dance with the lamp (before it transforms into a fire-breathing dragon).

-Felix imagines an elephant, monkey, and lion running toward him before confronting each animal head-on.

-Eventually, a serpentine like creature turns into a getaway car that drives Felix back to his neighborhood, where a policeman and a trumpet with legs begins to chase Felix.

-Felix arrives at home just after six o’clock in the morning and decides to quietly tiptoe up the stairs to avoid an angry confrontation from the female cat holding the rolling pin.

-Felix falls backwards down the stairs only to arrive at the conclusion that he had been dreaming the whole time and it was time to wake up.

And that is that. I am going to be spending Labor Day watching old cartoons like Felix the Cat in Woos Whoopee (1930) on repeat until Tuesday morning when I, once again, need to wake up early for work.

I really like Betty Boop and the early Mickey Mouse shorts

I love Felix the Cat and Betty Boop!