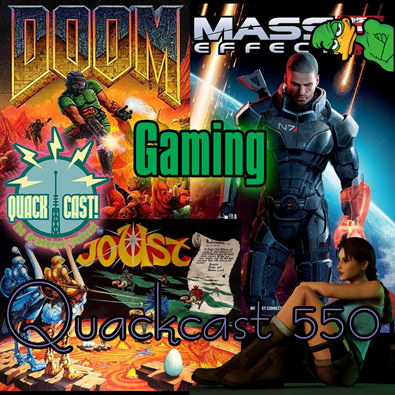 We decided to chat about games. Video game and computer games. They're now a huge part of pop-culture entertainment and they've influenced us in many ways creatively throughout our lives. There are many different kinds of games out there, but one of the really cool things about them is that they're able to deliver a kind of interactive narrative experience that takes things further than Film or comics can easily do. Games were also instrumental in the early days of the first big popular wave of webcomics with gamer comics (PVP, Ctrl Alt Dlt, and Penny Arcade) and sprite comics (8 bit fantasy), being some of the most popular.

For me, the look of game characters like Lara Croft (Tomb Raider), was a big influence for my comics, and the play style of military games like Battlefield 2 helped me get a good look for my military based comic (Pinky TA). Just the imagery and visual of games these days is inspiring enough, but even back in the day with simple side scrolling platformers, 2D fighters and top down anime style JRPGs the interactive nature of the games could still suck you in and inspire you. I remember I did fan art of the characters from Golden Axe back in the day and I used to draw the weapon loadouts for the JRPGs that I'd play. I don't play games very much at all now because they're far too addictive and I end up wasting hours on them, but even though they're not that creative (well Minecraft is!), they're still a great form of escapism, a good way to deliver a complex story, and a great way to hang out with friends and meet people.

What are your fave games and why? What games were most inspiring to you?

This week Gunwallace has given us a theme to The Last Aviatrix: The first early morning rays of sun peek over the distant horizon, brightening the sky from grey to blue… The cold silence is shattered by an aeroplane swooping low overhead. Frenetic energy, speed, action, a whirlwind of active momentum and fury as the sounds carry us along at a great rate of knots and then fade away…

@Amelius That's a whole HEAP of games! O_O I didn't realise how into games the DD community was :D I want to try playing TF2 with the Quackcast team

Yaaay vidya games! Yeah, I got favorites, just about anything Vanillaware produces (Oboro Muramasa: The Demon Blade, Odin Sphere/Leifthrasir, Grim Grimoire, Dragon's Crown, and I haven't had time to play Aegis Rim:13 Sentinels yet but own it as well as director Kamitani's proto-Odin Sphere, Princess Crown, which I'll need a translator to understand but will play someday!) Silent Hill and the original clunky Resident Evil games were a big influence on me, I absolutely adore Alan Wake (yaay sequel is coming I'm so PUMPED) and Control, both from Remedy. Most of my gaming time lately is in Guild Wars 2, ever since the outlet the gaming TV was plugged in died. But I do have a Vita, PSP, Ninty DS, and 2 retro emulators (one is a handheld for NES carts!) as well as Ps2-4 and Wii, but no Switch because Nintendo has been kinda evil lately. I played the heck out of Donkey Kong Country, DK2 and 3, Super Metroid was phenomenal, so was Castlevania: SOTN.

If you end up playing Mad Max and Chumbucket has you pick out a car body I recommend the "shovel face" (Mustang fastback) body. It's so badass looking.

They had the "Mad Max" game for 5 bucks on playstation. I haven't been able to put it down. It's surprisingly an amazing game in gameplay and story. I enjoy it more than the movies :)

@ozoneocean Yes Rimjob was indeed a parody of Skyrim. It was intended as a video game version of rule 34 https://www.urbandictionary.com/define.php?term=Rule%2034

@fallopiancrusader The original X-rated Tusk was very Skyrim in the begining... hahaha! Well the name was a parody on that wasn't it? Rimjob :D

One of the very few video games that I played was Skyrim. My favorite part of the game was that the developers made the developer's toolkit available to the public, so that any player could modify the game, and then post the mod for public use. A fantasy RPG is just so much more fun to play if all the dragons in the game are Thomas the tank engine!

My fave games? Metal Gear Solid 2 for its intense and dynamic stealth gameplay, as well as it's fascinating and, for today, very relevant story. Condemned for its unique and immersive horror atmosphere. Killer 7 for its style and its surreal gaming presentation. Ico and Shadow of the Colossus for their beuty and emotionally gripping narratives. MDK for its outlandish sense of humour and bizarre art design. Watching the let's plays of games like Max Payne and Tex Murphy were main inspirations of my comic Molly Lusc and gave birth to my love of the lovely, fictional style that is called noir. And the RPG Planescape: Torment which I only played halfway through inspired so much of what you'll see in Imsies the Imthology.