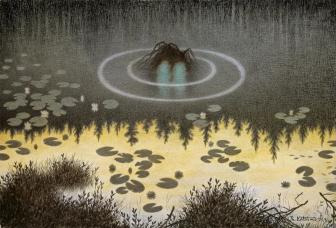 In my first post of the Fantastic Bestiary last week I talked about a mythic specie associated with smokeless fire and wishes. In this second post I’m gonna talk about a mysterious, mythic figure associated with water and music. The Nixie is a shapeshifting water spirit that originated from germanic mythology. It has been depicted in many, many different forms under many, many different names in various stories and myths told by different people throughout history. Go figure since it is a shapeshifter we’re talking about.

Sometimes thought of as a singular entity, sometimes thought of as a specie. No one’s been able to tell what the Nixie really is, where it came from or what its original form was, if it even had one to begin with. It is probably mostly known through the Scandinavian folklore’s depiction of the entity, as a young, beutiful man who stands naked in a river playing a stringed, musical instrument, usually a violin. In Norway there is folktales of a water spirit called Fossegrim which is closely related to the Nixie, also depicted as a young man, but playing a harp instead of a violin.

Now, I’m going to take the liberty of conflating Fossegrim and the Nixie as the same entity, as Fossegrim may just be another alternative identity taken on by the Nixie. Here in my homeland of Sweden the Nixie is commonly known as Näcken, though it has been called different names depending on the region. In the region of Skåne in southermost Sweden it’s been called Älven (The River) or Bäckamannen (The man of Brooks). Further north in regions like Värmland and Uppland it has been called Strömkarlen (The River man), which is also the swedish name for Fossegrim, and in the northernmost parts it’s been called Forskarl (Man of rapids) and Kvarngubbe (Old man of mills). These could once again be different forms and characters taken on by the Nixie.

Though it’s mostly today the Nixie is depicted as a naked, attractive young man. In the traditional folklore the Nixie is actually described to appear wearing more or less elegant clothing of the time, and could also appear as treasure, or various floating objects, or as an animal of some kind, usually the form of the brook horse, known in swedish as Bäckahästen, which was a horse that would lure children to ride it so that it could ride them down into a river and drown them. Regardless of name, form, clothed or unclothed, you’ll be let known that the Nixie is one heck of a musician.

It would win every Eurovision Song Contest it participated in, let’s put it like that. On the harp it’s lay has been said to have eleven variations. The final one reserved for the night spirits because when it is played everything within ears reach will start to dance. Tables and benches will dance, cups and cans will dance, the blind and the lame will dance, grannies and grampies will dance, heck, even newborn babies in their cradles will dance.

Many stories indicate that the Nixie would attract men, women and children with its enchanting music. In some stories it would use this enchantment to drown people in lakes and streams. When being malicious this way, trying to enchant particularly pregnant woman or unbaptized children to drown in a nearby water stream, calling its name (I assume meaning one of its chosen names) was said to defeat it and break the enchantment. Swimmers could protect themselves from the enchantment by throwing a piece of steel into the water as well.

There are also stories however about how the Nixie would agree to live with a human who had fallen in love with it, though usually it would end up leaving and return to its home, which was usually a nearby brook or waterfall. The Nixie was said to become miserable unless it had free, regular contact with a natural water source. There are also stories about how the Nixie would actually share its power with humans.

It was said that if a musician would bring an offering in the form of blood (three drops would suffice), a black animal, some booze or wet snuff dropped into the water, it would teach that musician how to play an instrument so good that the trees would dance and waterfalls would stop at the sound of the music being played.

Sounds like something to have in an RPG or a fantasy tale. You bring the Nixie some kind of offering, an object that is perilous to find perhaps, and the Nixie will give you the power to enchant all with your music. A fascinating and mysterious character the Nixie is. Free for pretty much any and all interpretation. Generous or malevolent, human or non-human, clothed or unclothed. My hometown is Trollhattan, and funny fact is that in the form of Strömkarlen the Nixie's face is engraved on a bridge just above the Trollhattan falls. 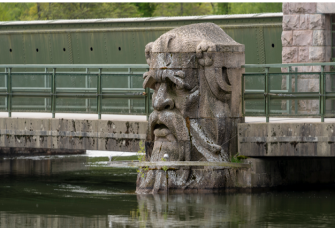 And that is where I choose to conclude this rundown.

So what do you guys think of the Nixie? Is he, or she, or it an entity you’d take a few notes from (pun intended^^)? What fantastical creature or entity of fiction or myth, any fiction or myth, would you like to suggest that I bring up in the next installment of this series?

Let me know in the comments and… I suddenly feel like going for a swim now… where is that music coming from…? So… beutiful8)

I would like to hear a song performed by a Nixie.

Nixies, Kelpies, Naiads, Ningyo, the Lady of the Lake... Just as with elves it's incredible how many cultures seem to have come up with very similar concepts. Thanks so much for this deep dive into Swedish folklore. I enjoy reading this kind of thing a lot. The German varieties are called Nixe (if female) or Nix (male) - nothing to do with the Northern dialectal spelling of the word for "nothing". The latter, also called Nöck, is an ugly water spirit who abducts young girls into the depths of his pond to be his slaves (there's a very cool, almost comic-like version by Wilhelm Busch). The famous Loreley from the river Rhine is presumably a human girl, albeit bewitched, and not actually an old legend but an invention by 19th century romantic poet Heinrich Heine. But if memory serves there's also the Melusine, who is half-serpent half-woman, lives in a well and mainly seems to be on the lookout for noble knights to have sex with. Needless to say, there's also a curse involved.

That was awesome man! So detailed. I loved the local info about the Scandinavian variations. Marvellous read. Yes, follow all Marorossi's suggestions <3