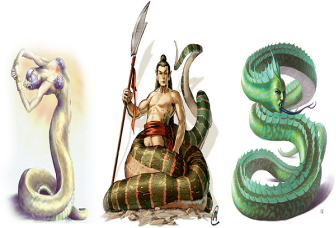 Last week’s post of the Fantastic Bestiary dealt with housespirits of ancient Rome. In this post we’re going to the far east, following up on another suggestion left by DD member marcorossi. We are going to study the Naga today. The Nagas are a race of serpentine beings that appear in both Hinduist and Buddhist mythology, as well as Southeast Asian mythology and folklore as a whole. A Naga often appear as a half-human, half-snake - usually that of the king cobra - of varying forms and sizes that is generally associated with water.

Nagas can be seen depicted on carvings on Hindu sites throughout Southeast Asia and particularly southern India. Sometimes depicted as snakes and other times as snakes with human features, usually a humanoid top half. They can be either male or female – the female version being referred to as a Nagi or Nagini.

They can be either a good or a bad influence depending on which text or tradition you turn to, but they are almost always powerful and cunning. In India in particular they are seen as the guardians of seas, rivers, wells and springs. They are also associated with fertility. Elaborate rituals and other forms of worship may be carried out by some Hindus in Southeast Asia to appease the Nagas, and thus increase fertility within the local community. On the negative side they are given the blame for floodings and droughts and similarly water-related natural disasters.

In Hindu tradition the Nagas are said to be the children of the sage Kashyapa and one of his wives, Kadru. Kadru wanted many children and saw to this by laying eggs that hatched into a thousand snakes. Nagas play an important role in several Hindu texts, particularly in the ancient Indian epic Mahabharata that tells the story of the Kurukshetra War, a legendary dynastic struggle that took place around 3100 BCE. In this story the Nagas are established as the enemies of another mythic creature. The half human, half eagle Garuda who is the cousin of the Nagas. Garuda and the Nagas become involved in their mother’s conflict which results in Garuda being enslaved to the Nagas. When he is ultimately released he thenceforth holds an eternal grudge against the Nagas, hunting them like prey.

Switching over to a less tragic view we have the Nagas as they are depicted in the Buddhist mythology. Where they are typically considered minor deities. Many of them are believed to live on Mount Meru - which is the five-peaked mountain of both Hindu and Buddhist cosmology in which it is considered the hub of all the physical, metaphysical and spiritual universes - guarding other deities from attack.

Others are said to dwell in Himmavanta, the legendary, hidden forest of the Himmanpan mountain, or the Himalayas, where small and large mythic creatures, as well as deities, of Thai folklore resides. In line with their general association with water, many of them are in this tradition also believed to reside in oceans, rivers or streams, while others are believed to live underground - connecting their race to the enchanted underworld, a realm filled with gold, gems and earthly treasures called Naga-loka or Patala-loka.

In many Buddhist places the Nagas have been combined with creatures of other mythological traditions, sometimes portrayed as a human being with a snake or a dragon extending over its head. One Naga, in human form, attempted to become a Buddhist monk. When it was told that such a thing was impossible, the Buddha told it how to ensure that it would be reborn a human, and so be able to become a monk.

One famous Naga you should know about is Shesha, who is often considered to be the king of the Nagas and is often depicted with many heads. Most notably - on the request of the Godhead, The Brahman - Shesha was the one who agreed to hold up the world in order to keep it steady, remaining coiled doing so. Whenever he uncoiled, time would move faster. If he ever coiled back, the universe would cease to exist and he would remain the same without it. Quite a creepy responsibility to lay on a serpent man:P He’s also known to be the one who holds up Vishnu, the supreme god of Hinduism, as his bed and consort while floating in the eternal ocean of the cosmos.

Another important Naga in both Hindu and Buddhist mythology is Vasuki, another king of the Nagas who is depicted being coiled around the neck of Lord Shiva, one of the three most prominent Hindu deities. He plays an important role in a story where the gods and the demons needs to extract the essence of immortality from the ocean of milk, and they do this by wrapping Vasuki around Mount Mandara and then uses him as a rope to churn the ocean. Again, a creepy responsibility. I’m sensing a theme here:P

A less creepier, but no less important example we find in the Buddhist tradition. The Naga Mucalinda, the mighty king of serpents, is considered a protector of the Gautama Buddha. He once used his hood to shield this Buddha from the rain and the wind and the icy cold of a heavy storm that lasted for seven days, while the Buddha meditated under the serpent king’s protection. Mucalinda is often depicted in works of art stretching his many heads above the meditating Buddha. Sounds like a very compassionate and noble serpent - unlike the one Jesus met in the middle of nowhere - doesn’t it?

And with that I conclude this rundown. Nagas, like the Jinn, seems to me a very fascinating and versatile, mythical race full of potential for any out there kind of fantasy story. It is especially cool that they are part of the mythology of two world religions, as well as local Southeast asian folklore, and can be associated with so many different mysterious, mythical places beside the underground, as well as oceans, ponds and streams. Still, I’m not sure how much gravitas there is in having your mere coiling responsible for the continued existence of the universe, or having yourself used as a rope to make immortality imbuing cheese.

Sounds like the divine powers really likes to play practical jokes on the Nagas. I guess the snake people don’t really mind it though^^

So, what are your thoughts? Have you ever used or planned on using the Nagas as ropes in your creative works? What fantastical creature or entity of fiction or myth, any fiction or myth, would you like to suggest that I bring up in the next installment of this series?

Let me know in the comments below and I wish you all, wether you celebrate it this weekend or the next, a Happy Easter.

One thing that bothers me a little bit about the reasearch is that the powers of the Nagas weren't that clearly explained in any of the sources I found. But what we can assume is that they are shapeshifters, shifting between human form and their serpent form. They have magical powers related to water, including rain - hence they also have power over fertility and prosperity of the land - and can cause natural disasters if they so wish. They are powerful guardians watching their treasures, as well as in some cases standing guard for the Devas - indian deities - against the Asuras - giants with many heads and arms.

@ozoneocean: The Nagas of Xanth were the first thing I thought of, too. :D There is also the Delve version, which has some similarities. I can't think of any author who incorporated any of the mythology around them, though, and that's a pity, considering how rich it is. Thanks to Andreas for bringing it closer to us. Before I read this article my knowledge of Nagas was practically zilch. I wonder if there's a link to Chinese dragons - one or two aspects remind me of them.

One of the things that really fascinated me in this research was the Mount Meru part. A magical mountain that is the central hub of every and all universes. Sounds like something straight out of the plattforming games I used to play back when I was a kid.

You know, my wife was always Naggin' me too; I said what are ya, some kinda half a snake or somethin?

Fascinating series you have going, here! The snake is definitely a powerful image. They freak me out, I'll tell you.

If naga and djinn are elemental spirits, they fear their opposing element. Each is in balance with one another. So there are the spirits of fire and earth. Of course there are hierarchies within each. Ones of greater and lesser powers. Then there are nonelemental entities like demons who don't rule an element but a sphere of existence. There are hierarchies within hierarchies until you get to deities and their servants unless you go with the belief that elemental spirits are servants of elemental deities. And in the end you get to such fantastical and intricate hierarchies that you need to derive the number of angels dancing on the heads of pins.

Now this sea creed oddly is in my weird ass cup of tea. I don’t like them and yet I like them. Kind of like taboo for me. I have drawn them before and became fascinated with drawing them. But I don’t like them as a character and pretty much stayed away from them. I don’t know what it is. I kind of feel the same way about mermaids. Honestly, I don’t believe in myself to make a character interesting enough to bring to my story. Maybe it’s because I’m not really interested in such a race. Yeah, I’m at odds. How about, dare I say, Vampires….not just the traditional vamps we all know but the different types from other cultures and countries. So some 20 years ago I found out that vampires kind of exist as different species and even different realms or dimensions. From all your research on all these species you bring up, I wonder if vampirism exist in their world. What would spook a Naga, and a Jinn? Gods?

I liked the Nagas in Piers Anthony's Xanth books <3

I used Nagas as opponents in tabletop RPG campaigns, usually the snake with a human face version, generally packing them with magic powers. For some reason I think nagas are super cool.