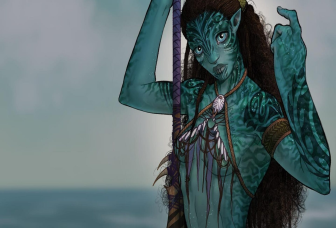 Another pop cultural fantastic bestiary Sunday. Anybody remember the movie Avatar? Not the kung-fu fantasy one, the tribal sci-fi one. The James Cameron’s Avatar as it was marketed. I still remember it being the movie that REALLY set the standard for what CGI technology can do cinematically, making this alien world really come to life on the screen. I re-watched the movie just a few months ago and visually I think it still holds up. It’s a beautiful looking film.

But I’m not gonna spend this whole article talking about the looks of the film. I’m here to talk about the starring humanoid, alien race of the film, the Na’vi. These really tall, really slender, blue hunter-gatherers with large, cat-like eyes, long, sweeping tails, a technology equivalent of the Earth’s Paleolithic Epoch and a profound spiritual connection to all of the lifeforms of their homeworld, the jungle moon of Pandora, and its universal deity Eywa.

The Na’vi populate various biomes of Pandora such as deserts, icy tundras, tropical reefs, wetlands and mountains - although their population is mostly focused within the jungle - in territorial clan societies. Although Earth scientists consider the Na’vi to be a singular specie, the Na’vi has a unique level of diversification and morphological variation resulting in various subspecies. There is for example an oceanic subspecie of Na’vi who have evolved to an aquatic lifestyle developing arms and legs with fins, broad, paddle-shaped tails, greener skin with watery stripes and blue eyes. Especially how many subspecies of the Na’vi that exists on Pandora is unclear.

All Na’vi live under an egalitarian social structure built around hunting, foraging and handicraft that is all centralized by the worship of Eywa, who the Na’vi consider an all-encompassing goddess who protects and manage the natural balance of life on their moon. Following the will of Eywa the Na’vi always strive to live in perfect harmony with their environment, taking only the resources recquired for survival. Although each Na’vi clan has its own culture, history, art, music and code of dress, all Na’vi are unified by The Three Laws of Eywa, or the Na’vi Way as they sometimes call it. Which are as quoted:

“You shall not set stone upon stone.”
“Neither shall you use the turning wheel.”
“Nor use the metals of the ground.”

These laws sets up strict boundaries for what is appropriate in Na’vi society and explains much of their lack of technological development. Indeed, the Na’vi’s naturalist lifestyle is a choice they’ve made to protect their ecological harmony. This said though, the Na’vi do display certain cases of advanced tools, such as the crossbow. One clan of Na’vi have even developed sophisticated forms of chemistry. Each clan consists of an average of 300 members and are traditionally led by an Olo’eyktan, the chieftan of the clan, and a Tsahik, the clan’s shaman who communes with Eywa and nourishes the clan’s spirituality. It is a common tradition among the Na’vi clans that these two central figures are to be a mated pair, though there are exceptions to this.

Each Na’vi individual is born with the innate desire to fulfill a roll needed for their clan’s survival, and each role is of value to the clan. And the distribution of roles remains balanced as the spiritual energy of the clan’s deceased influence the natural inclinations of each of the clan’s children towards their desired path in life. The common roles within a Na’vi clan are not divided by gender, only by ability and necessity.

The training for a role culminates in a rite of passage. The rite called Iknimaya is undertaken by hunters, who are also the warriors of the clan whenever called upon to fight, and Uniltaron by all members in order to be considered a full adult and thereby permitted to choose a mate. War between clans is rare, but does occur from time to time, typically when a clan is pushed into the territory of another due to external causes, rather then a purposeful invasion such as that one carried out by the earthlings.

War between the Na’vi themselves is typically characterized by brief periods of intense battle followed immediately by intense negotiations striving towards a peaceful solution. Excessive or unnecessary death and bloodshed is never the goal of the Na’vi. Conflict within a Na’vi clan is also rather brief and usually resolved quickly through either peaceful means or ceremonial combat.

One particular unique trait among all Na’vi is the neural connection called Tsaheylu which means “bond” on Na’vi tounge. The queue of a Na’vi has exposable, neural endings at the tip that has several uses, but its primary ability is the ability to bind with the exposed neural endings of different creatures on Pandora, forming a mental connection between Na’vi and creature. This is used among other things to command a banshee, a large aerial dragon, or a direhorse, a horse-like creature, to direct it and ride it without the use of reins, memories or even sensory data. The two bonded will know each others thoughts and mood and feel each others pain when hurt.

One legendary Na’vi has the power to unite all of the clans in times of great strife and sorrow. And that is the Toruk Makto, the one who bonds with and rides the great, winged “death from above” dragon called Toruk. Including the main protagonist Jake Sully from the movie, only six Na’vi have historically achieved the status of Toruk Makto. How many reunions there have been historically is unknown. And that is where I decide to conclude this rundown.

My own thoughts, I really dig the Na’vi. I really like their naturalist ways and their profound respect and understanding of all living things. Critics may bash the movie for being just another Pocahontas or Dance with the Wolves type of story. Critics may argue that the Na’vi are too perfect, too balanced to be believed. But I don’t care. It’s fiction. And sometimes it can just be so satisfying to have a creative work illustrate how a human, or human-like, society can fully embrace and enforce spiritual and environmental harmony and a wholesome way of life.

But what do you think of the Na’vi? Do you too like the James Cameron's Avatar movie like I do, or do you dislike it? Would you perform Tsaheylu with your dog, or your cat or your horse or your…err… goldfish? What fantastical creature or entity of fiction or myth, any fiction or myth, would you like to suggest that I bring up in the next installment of this series?

Avatar is awesome. Great world building, beautiful visuals. Characters and dialogue are cartoony in the typical Cameron fashion (e.g., Aliens, Terminator, True Lies, Titanic). A lot of the hate seems to come from contrary fans who bust on it for cartoony dialogue and the "unoriginal" storyline. These same fans will rave over the even more formulaic amd generic Marvel movies, which lack the heart and social/environmental conscience of Avatar. (Not to knock Marvel, but I hate the double standard of fandom.) Yes, plotwise Avatar is derivative (it's basically a rain-forest Dune or sci-fi Dances With Wolves), but the execution and world building are handled brilliantly.

I personally wasn't a big fan of the Avatar movie. I thought the Na'vi were strange and just kinda silly. The movie lost me when they would have the guy in a wheelchair go into the body of a Na'vi. Always have been a fan of Avatar the last airbender and I felt James Cameron's was a copy of the name.

Might have to give Avatar a go, though. From the description here, there seems to be some neat world-building involved and the Na'vi species itself sounds as if someone made the effort of creating something from scratch (or at least original enough that you can't immediately spot the sources). I like that.

@marcorossi: Same here - and I didn't even watch that new-fangled stuff, because if my students like it and it's computer-generated that's already two pretty reliable warning signs for me to stay away from it, normally. :D

"Anybody remember the movie Avatar?" Sure I remember this extremely recent one, even more recent than the LOTR trilogy. Stop making me feel old.

What do I think of the Na’vi? Which is what your question was. Nice people. Wouldn't mind having a beer with them. I don't smoke, so no peace pipes for me, but I'd fake it for politeness.

Only saw Avatar a year or so ago. I liked it. It was much better than I expected. All the advertisements had me thinking it was going to be much different. Still, think it was very derivative of other movies (with a scifi camouflage). So much hidden political messages....