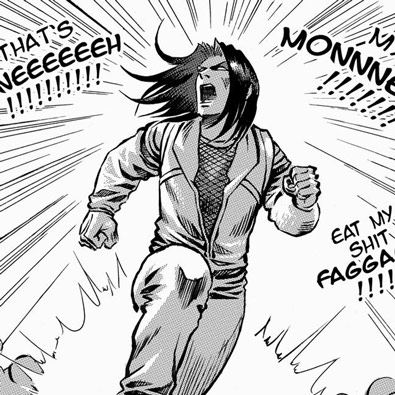 A small gang of imprisoned tough guys are “offered” the chance to do some advanced military training… It turns out that a little earlier while they were meeting in a park to discuss their dastardly plans when an alien starship abducted them and they may or may not have rampaged on the craft. Perhaps we'll find out?
This is an interesting specimen! The art strongly reminds me of Masumne Shirrow's work in Ghost in the Shell and Apple Seed, it has a very 1980s manga look: Black and white and lots of traditional half-tones. The dialogue however features some very bad syntax so it would seem to indicate that English isn't MG78's first language. This makes it quite a challenge to decipher the meaning, but I think it's worth it because it's a cool premise and that art is awesome. I just wish MG78 had a proof reader.

oh that's cool! as soon i ll reach the next page with dialogues, i ll send u a pm...

Thanks for the extra info! Yes, I'd be glad to check your translations :)

2/2 3) english it s not my first language. so a lot of errors... happen(ed) and ll happen. i used to be helped by an english reader, a lot of time ago, but i was left alone quite soon and since then i did not searched anyone anymore. so... let's say by this way: free comic, free errors XD all this, except when the 5 insult each other. right there it's me who have fun creating some exagered slang, dixtorting insults, mostly for my pleasure, lol. also because, for them, insult its a value. btw, if some1 want to check my translations, i ll be glad to give the preview.

oh hi! thanks for the feature! i apreciated :) to give some answers: 1) you ll find out everything, on why the 5 was in that cell. i just hope to not forget something out. so yeha, there ll be what the 5 did on the spaceship, until the encounter between the 5 thugs and the colonel. problems for everyone. and... (i hope) a surprise. (huge). 2) Masumne Shirrow! damn. how much i admire his works T__T" yes, Shirrow is one of the artists i looked mostly, in the past like now. him like Katsuhiro Ōtomo, Yasuhiko Yoshikazu and... Tetsuo Hara, who was my first "shock", 30 years ago. 1/2

I have enjoyed the mystery in this one as it unfolds.

Yay! I'm a long time reader of that comic!