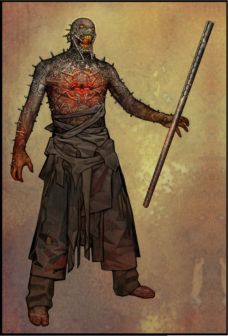 I’ve said this before. I LOVE the video game Condemned. I also love its sequel Condemned 2. Also known over at the states as Condemned: Criminal Origins and Condemned: Bloodshot respectively.

I’m not gonna talk so much about the games themselves in this article, but I warn you, SPOILERS AHOY. Seriously speaking, this is the one horror video game series I absolutely adore, and I don’t even like horror games much. Why? Well, a big part of that is because it features, in my opinion, the best, most horrific evil cult ever seen in any stroke of fiction period.

Now let’s be frank here for a moment. When you have a horror story involving an infernal cult, which are usually occultist in nature, they’re usually the least horrific thing in that story. The horror rests almost entirely in the power they worship and/or the big, evil thing that they’re trying to summon into our world.

The cultists themselves, seperate from Cthulu or the Anti-Christ or any of their otherworldly minions, usually amount to no more then a bunch of creepy dorks who enjoy things such as:

Drawing pentagrams…
Building creepy-looking temples, shrines and/or altars…
Standing around, or possibly dance, in circles…
wearing outdated robes…
chanting a bunch of archaic gibberish…
Throw in a blood sacrifice or spooky transformation now and then just to spice things up a bit…
… and overall acting like creepy dorks to anyone they encounter outside their spooky little club

That’s all good and servicable of course, but it’s also kind of vanilla these days, isn’t it? The evil cultists in both resident evil 4 and Silent hill 1 & 3 (All of which I’ve played through) I count to this category. Yes, some of them transform into monsters and all that. But again, that’s not them doing that really, that’s the mutating parasites injected into their bodies, or the summoned power of the nightmare dimension, doing that for them.

But then there is Condemned, and the Oro, my favourite evil cult of all time. Men who’ve modified themselves with weird, self-brutalizing technology to amplify this ability they naturally have, which is emitting a sound that turns anyone with aggressive instabilities within into raging, murderous berserkers.

This gives them sonic powers that serves both as a weapon and as an instrument for this evil, supernatural element lurking within the collective human sub-consciousness, since the dawn of mankind, for which the Oro has made themselves twisted representations of. And for which influence and madness the Oro are unleashing onto the world with the aid of their psychotic, sonic tech.

The Oros have always been there in the shadows, controlling all of civilization behind the scenes with this power, and are theorized to have been responsible for all of mankind’s violence, cruelty and uncontrolled hatred throughout history

The picture you see here is a piece of concept art of the Oro Dark Primary encountered in the first Condemned game. He’s one of their elite members reffered to in the game as The Hate. I absolutely love the aesthetics of these guys. There’s something otherwordly about their looks, having these metal pieces pierced through their bodies and these metal jaw things that makes them look absolutely monstrous and inhuman up-close.

They are something unique, infernal and truly horrifying in of themselves. They make me think of those freaky test subjects in the Russian Sleep Experiment, for those of you familiar with that creepypasta. They ARE the madness that lurks within us all, begging to be free in our deepest animal minds. What we hide from in our beds every night. What we sedate into silence and paralysis when we go into the nocturnal haven for which they cannot thread.

Granted they’re not as horrific in the second game, but I still love them there too. I think they as cultist horror villains, and the unique, supernatural element they bring with them, is just awesome overall.

So what’s your favourite horrific, evil cult? Do you agree with me that most evil cults in fiction aren’t that horrific in of themselves or do you object? What do you think does or can make an evil cult truly horrifying?

Let me know in the comments below. And if you are a horror gamer with an XBOX 360 and you haven’t tried out Condemned/Condemned: Criminal Origins yet. Do track down a physical copy if you can and play it. It’s an awesome horror game I whole-heartadly recommend.

@Ozoneocean - It shall rise eternal! Shiny and Chrome!XDXDXD

Hahaha "The one-eyed king of Valhalla" That's what I call my penis... (not really :P)

The moral of this: always make sure you have some beetroot in your pantry. It's good for you.

Let me tell you a true story from my student days: About ten years ago Jehova's Witnesses kept visiting me and my neighbours ever so often "to talk about God". We'd take their pamphlets out of pity. That one time, though, I was in the middle of preparing a beetroot salad, which involves a lot of purplish red stains that to an inexpert eye look very much like blood, especially in bad light. Absentmindedly, I answered the door holding a large kitchen knife and spattered all over with these vegetable "bloodstains", metal music hammering in the background... They: "We would like to talk about... er... religion..." Me (something instantly clicking in my head): "Oh great! I'm, like, totally into religion! Can you come back in, say, half an hour, when I'm done with my sacrifice to Odin? You know, the stars are..." THEY closed my door in my face. I don't know if they were scared or just peeved, but - and that's the main thing - they obviously put me down as un-saveable and NEVER CAME BACK.

@Corruption - Well, that's kind of what the Oro is about. They themselves don't kill that much. They just spread the will to kill others in peoples heads. And they as a secret society don't really have much of a motivation other then for violence and cruelty to spread. One could say that they already control most of civilization from behind the scenes. But to the Oro, that's not really being in control of the world. Not for them. Control to them is to have the madness that rules them, rule everyone else as well. They are evil for evil's sake and can therefore only truly be in control by spreading evil. They act like a sentient virus of the soul. Very similar to the Chaos gods in Warhammer 40k^^

I'm with Oz. Jehova's Witnesses are creepy in a way. Scientology not so much, as they remind me more of an ordinary Mafia cartel, with their weird notions too obviously a front.

@Ozoneocean - That would totally be a Quackcast topic I'd tune into:) But yeah, real life cults will always be more disturbing then fictional ones. Like you said, the phoney friendliness/passive agression. The brainwashing. The isolation from the outside world. The extortion. The active emotional abuse. The close-doors assaults. Friends you may have had, even family, that will treat you like you don't exist once you're out of the club, cheated, scarred and desillusioned. It's really ugly, ugly stuff once you pook under the shiny surface:(

@Corruption- "Heresy" can be what cultists use as term to describe people who don't share their beliefs. In Warhammer 40k there are MANY cults, not just the willing chaos ones. The biggest cult is the cult of the Emperor and they call everyone else heretics. All loyal humans should be part of that in some way. There are unaware chaos cultists who are just standard oogy boogy cult members who don't know they're actually working for chaos, usually Tzeentch if it's occult or Slaanesh if it's a hedonistic or masochistic sex thing... Nurgle would be our lovely antivaxers. I can't imagine Khorne being secret. There's the Machine cult, which is Imperial but has a slightly different belief about machine spirits... There are also cultists who worship the genesteelers because geensteeler infestations/infections sort of brainwash people into following them. The "cults" of the other races are more codified and not really like cults.

There is another very scary cult type: the heresy or extremist. These people believe they are doing good, but spreading massive evil. They are scary because not only do they do these acts, but you must ask yourself how easily good people can be twisted into such monsters. It is of an evil within that lures the devotedly good very easily.

@ Ozoneocean, considering they considered Trump to be the savior in fighting massive international conspiracy that had been in the background for ages, it may be argued that they were a cult For me, most evil cults seem to be based on following an evil power and doing evil things in exchange for rewards. Now, in the Warhammer universes, things are different. They willingly become twisted monsters, knowing they would become that way, and opening indulge in sick twisted acts, with their eventual reward being to serve the Chaos Gods after death. Cults do not have to be powerful to be scary. A small cult that dwells in a large city can be terrifying as no-one knows who could be a member, and people turning on each other believing that they are the cultists, or supporting them can cause massive deaths. Heck, the cultists might not kill more than a handful and thousands die due to the panic. Others slaughters and blame the cult. That is scary!

Angry delusion in a mass is scary though- when you think about the pro-Tump Q-anon group for example. These suggestible people were manipulated and directed quite easily. And they weren't just morons either, many were educated, thinking people, military officers, teachers, actors, comedians, business people etc, but due to the way they think and what they listen to they were taken over by these crazy ideas. It's scary that seemingly normal people can be taken over and manipulated, turned into something nutty- Because we know that could happen to US too. And that plays into things like the Bodysnatchers, and The Thing. It's a horrifying idea.Could be a good Quackcast topic! fictional cults and real cults.

Horror things and cults aren't really for me, haha! You're right in that cultists in games are just drones, henchmen, chaff to blast through. The cults I find scariest are the super nice ones, like mormons or hippys or jehovah witness's - especially when their blank-eyed, fake, saccharine niceness is ratcheted all the way up to 11, as it is in fiction. Super "nice"-seeming people that hide a horrible darkness. That is the stuff of nightmares. But I probably just think that way because I've been inculcated by Hollywood because that was a strong theme from the 80s and 90s as a reaction to the weird US ultra conservatism of the 50s and 60s as well as a parody of the evangelical Christians and racists from the southern and Midwestern states...