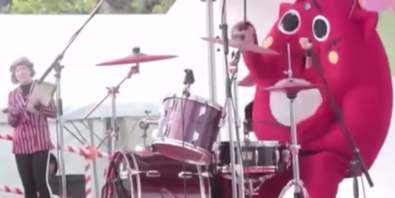 
when I started putting my webcomic out I'd been drawing for most of my life already, and knew the characters and setting really well. The stories I would figure out as I went…and still do.

As far as the art goes, it's changed over the years in terms of what kinds of backgrounds and foregrounds I try and use. Actually, it's still kind of in flux, probably; I'm just updating more slowly these days so there might be more gradual…fluxing.

There are endless ways to compose the visuals of a comic - I've seen comics done with unaltered photos, where the creator and their friends would run around and take all these pictures. Easier as far as drawing, but still plenty of effort required, especially if it's trying to tell a coherent story. Our friend bravo does photo comics with dolls, enhanced with actual props and clothes as well as green screen backgrounds and finishing in photoshop.

Cartoon-like characters against a more realistic drawn background is a very common style for webcomics. The reverse, a realistic 3d character style against a hand-drawn background: I think that's less common, and would give an unusual, stylized look. I think that would work for some specific comics but it would certainly stand out as different!

What interesting compositions of different styles for characters vs backgrounds have you seen? Have you tried anything unusual yourself? How to you put your characters and backgrounds together?

Okay, that's it for me! Chow for Now,

Sometimes things get lost in backgrounds so I blur it out or so use the greenscreen to put the figures directly on the page. I have used about everything for backgrounds: photos, 3D renders, drawings, detailed sets to minimal sets. Depends on the story I'm telling. Sometimes just like a stage play all you need is the suggestion of the setting as opposed to a fully detailed location.

Nyango Star slays! I feel like backgrounds usually require some integration with the rest of a picture or panel's composition, so no matter what they are, there's almost always some work done on them. I don't always even notice at first when a skilled artist might use a photographic material for a background, because they've used their skill to make it more consistent with the look of the rest of their art.