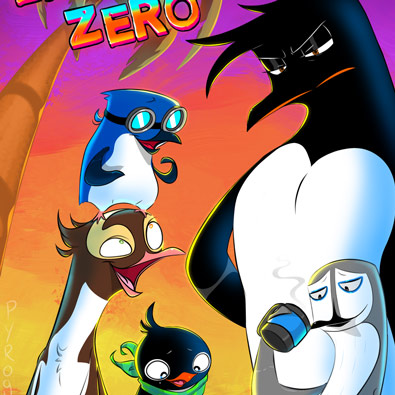 Penguins are dressy little birds in white tie that swim like fish and only live in the coldest places on the entire planet, right? Wrong! They live a bit further afield than that, like the good birds of Latitude Zero, living together on the lovely tropical Galapagos Islands, hence the name of the comic “Latitude Zero”, which is where they are, on the equator. We start by following one of the cast, a skinny fellow doing what comes naturally to Penguins, namely hunting fish. It's all told visually in a very readable manner, almost like a Pixar movie, but this activity is nothing out of the ordinary for a penguin… It's only when it emerges from the depths that we get the TRUE reveal… I won't spoil it. This looks to be a fun comic about a little ensemble cast of characters. It's just now starting and this is the chapter where we're introduced to the little buggers so keep reading along with it to find out more.
The art is colourful, highly sylised, professional and very slick with all sorts of clever tricks employed to make it stand out and flow. The story is very visual, this is a comedy adventure anthropomorphic comic.

This comic looks fantastic. Makes me think back to those old anthropomorphic cartoons I used to watch as a kid. I love it^^