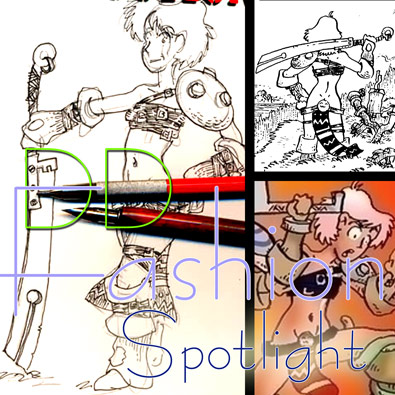 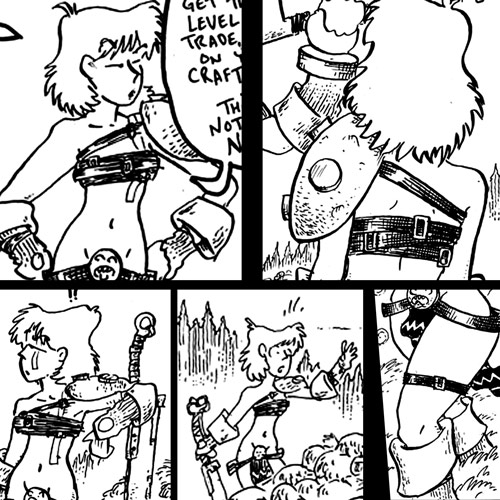 The sexy lady barbarian trope is a pretty ancient one. Contrary to popular belief this did not begin as a male-gaze gaze nerdy fantasy in the US in the 1970s with Dungeons and Dragons fans. It goes back at least to the Romans (and possibly older), who came up with the idea of fantasy lady gladiators from far away places, imagining people from exotic lands to be fantastical in every way, they dressed them up to perform in the arenas to fit that stereotype and attract audiences. Since then the imagery of fantastically dressed skimpy lady warriors would always crop up in classical art here and there with nods to the current fashions of the time. In the 1960s they had a bit of a spike in popularity again with the rise of the Italian sword and sandal films, and then in the 1970s with the sword and sorcery artwork of Frank Frazetta.

“Rose Red” suggests to me influence from Red Sonja, a famous sexy sword and sorcery figure, adapted from Robert E Howard's (writer of Conan) Red Sonya, who was entirely different and not a sexy barbarian at all!

Rose Red here has an ensemble that suggests to me an influence from anime or the dark elves in World of Warcraft. It's on the erotic end of sexy because she's from an adult comic, and there's no fighting practicality to her gear because this is the form of a game character. She wears the classic fold top gloves and boots, which actually come from men's clothing from the 17th century, they give her a piratical, adventurer flair. The belts across her bust and thighs are an original touch, suggesting B&D sexy danger and toughness. Her plug covered armoured spaulder strapped diagonally across her chest is massively oversized, it “protects” her shield arm, but it's really there as a nod to the warrior convention, with the anime form showing obvious influences. At her groin and bottom she wears a precariously placed medallion with a face, meant to tease, suggest, and draw attention to what it's hiding. Leather straps on either side are its nominal support. From it hangs a lap-lap or loincloth with a striking woven pattern of zigzags and lines.

A random line of paint on a boob and her face is an anime barbarian convention that has it's inspiration from things like the first nations people in North America and Brave Heart, which is in turn a fantasy based on ancient Roman accounts of the Picts and their blue face paint. It's popular now to show tribal “barbarian” type people with face-paint (i.e. Vikings), but the only people we really know who did this were tribal peoples in Australia, Africa, Polynesia, the Americas, and Melanesia. We have no records of ancient Europeans doing that except the Picts.
Finally she has a short, surprisingly practical mullet style haircut (not what you'd expect with the rest of her gear), and her sword is an anime inspired and modified version of a cross between late 19th century Chinese Da Dao and Chinese Oxtail Dao: which you see by the long “S”, counter curve, the wide blade, long hilt, minimal guard. and ring in the pommel.

The purpose of Rose's gear is to suggest a sexy caricature of a lady barbarian, to both excite the viewer and immediately tell them what kind of story it is. It's hyper, exaggerated and iconic. A great design all up!

Who is your fave sexy lady barbarian? Mine was a tie between the classic comic book Red Sonja, and the character played by Grace Jones in Conan the Destroyer. But now it has to be Rose Red I think ^_^

I love your design!

Thank you so much for featuring my Rose_Red on this! I'm glad you like her character/fashion design. And as KAM says, Aragones is definitely a big influence. The style is intentionally a mash-up because that isn't really "her" - the real person - it's a character in a video game; I imagine the "real" Rose_Red spent a lot of time tweaking her character's appearance... and ended up going with some gear because it had the best stats.

Well spotted! Groo! Yes, his art style is very much in that mould! I don't know any of those barbarian ladies 😳

Favorite sexy barbarian ladies... Tara and Shakira from DC Comics' The Warlord. Redfox from the British comic Redfox. Not technically barbarians, but Lady Chian from Arion, Lord of Atlantis and Jinal Ne Comarr from The Barren Earth. There's also two female barbarians from some webcomic around here... umm... Gertie & Brunie? No, that's not quite right. Well, maybe someone else can remember their proper names. ;-)

I actually asked him about an influence you missed & he confirmed Sergio Aragones (Groo the Wanderer amongst other works) was an influence.