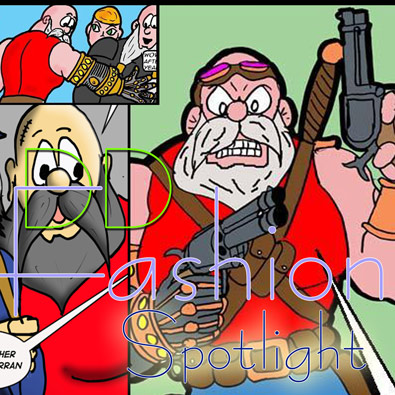 
This week we have a charming bald dwarf from the world of Magical Misfits. Headmaster at the institute, studying the magical mythical race called humans that once walked the lands of Terr. Magical Misfits has been a mainstay at Drunk Duck for decades! Wheels Ironkeel is one of the elders of DD. 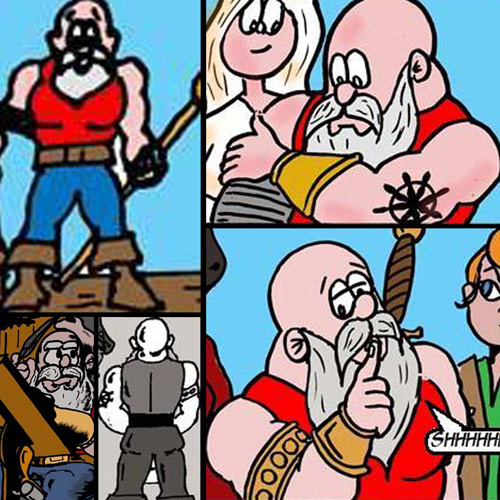 Wheels is a stocky, well built dwarf with a powerfully muscled chest, big shoulders and arms. His outfit certainly shows that off to best effect. His tight, bright red tank top clings to every muscular ripple and curve, while leaving his huge shoulders completely bare and visible. His thighs equally bulge in his tight blue breaches that are bracketed top and bottom with brown leather accoutrements: a belt at the waist and 17th century style fold top cavalry boots at his feet.

He has gold metal bracers on each wrist and a gold and jewelled band around his right bicep where his prosthetic arm attaches. You'll also notice the nautical ship's wheel tattoo on his left bicep. He's as bald as an egg but his bald head rests comfortably in an ample nest of white beard and moustache. 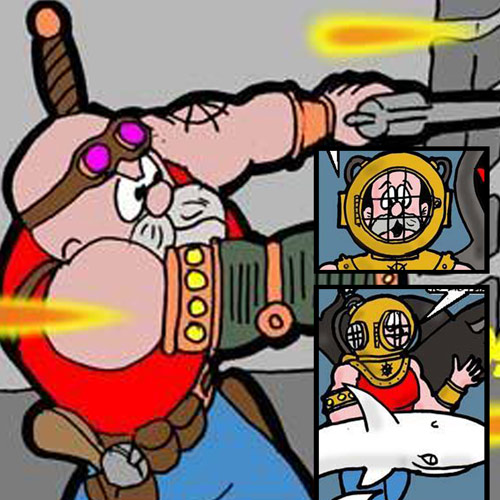 Here we have post apocalypse and deep sea diver aesthetics!
Wheel has a bit of a Duke Nukem feel with the red shirt, Blue jeans, and white hair and that's especially true with the shotgun here! I don't think that's intentional though. The deep see diver helmet is utterly impractical without the rest of the suit but it looks very cool and there's always magic 😁👍

His outfit and look expresses action, adventure, strength, wisdom, and experience.
Where does it come from? Superficially it looks like Duke Nukem, but I'd say the real influences may be space opera adventurer Flash Gordon, with a whole healthy heaping of Dungeons and dragons! Fold top boots are a mainstay of post 1970s fantasy art and they've been in superhero comics for much longer. Lastly I think the author himself may have been an influence, maybe even a subconscious one, because a resemblance does exist!

What do you think of Wheels' outfit and style?

lol, yeah great one @corruption and I agree wheels is stylish. :D

This is so good! Great design.

davidxolukoga: That was a mental image I did not need, expressly since they would have done it wrestling in the ring before an audiance! About Wheels clothing,it has developed over time. Why, now he is seen to wear blue pants! For his old fashion sense, take a look at the strip "Wheels' Closet" https://www.theduckwebcomics.com/Magical_Misfits/4777298/